Busier than a One-Armed Paper Hanger

It was crazy from the beginning.

We were to leave the hotel at 8:00 this morning to get into the city to meet our guide.  I should have known we were in trouble when we didn't leave until 8:15 (those responsible for that have been given bus cleanup duty).  Heading into the city, we had difficulty finding the cultural center.  After a brisk run around the lyric opera house, we contact Mitch's friend, the director of music at the Methodist Temple in the Sky and got him to help us find the church.  Shortly before 10 (and an hour after our tour of Chicago was to begin), we dropped the youth and chaperones at the temple while the driver and I set about locating our tour guide.  We did eventually find him, picked up the group at 10:45, and headed on our way.

It was about an hour driving tour of the city that wound up at Wrigley Field.  We ate at McDonald's in something like 20 minutes and headed toward our concert.  After that, things went much more smoothly and according to plan, although it was a packed day.  Two concerts back to back (in great venues).  Back to the hotel for a quick change and then to the Sox game.  We left at the 8th inning and returned to the hotel for devotional and a bit of birthday cake (happy birthday, Theresa and Sam!).  Then lights out and such...taping in shortly after midnight.


Our devotional tonight was given by Mitchell P, Austin L, Marshall T, and William M.  They talked about Witness (the piece we are singing) and explored some ways we can be witnesses in every day living...we do not have to be singing to witness effectively.  A great message.

Congratulations to Sam B and Lea P for winning the award for appropriate emotional response (formerly known as the smiley award) at our first concert today!

As we approached our debriefing time, I asked the youth to talk about where they saw the face of God today.  The responses were interesting and varied.  While I my question was designed to avoid simply sharing the stories of those we encountered today, it quickly became clear that they wanted to share the stories.

I made it a point today to look each singer in the eyes while we were singing.  Their reactions to that are interesting.  Some of them smile.  Some of them make silly faces.  Some of them get more serious looking.  It during "Many Gifts, One Spirit" that it hit me: I see the face of God in their faces.  I shared that with them tonight.

Great photo op today while we were on our tour.  I'll close for today with a picture of the group and also a picture of our bus driver, David.  Goodnight, moon. 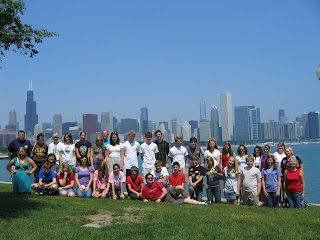 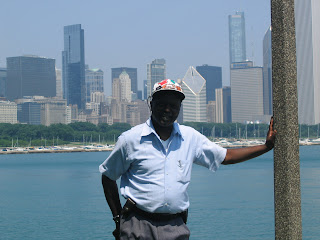