Our Mission...to "share our true light through strings of plastic"

Today started out wonderfully.  Bus loading and choir warmup went well.  Service was all I'd hoped it would be.  Sermon flowed to communion nicely, and even the Ascension Day scripture complimented our mission focus very nicely..  The choir sang reasonably well, even as we walked out of the room singing.

The congregation applauded as we left.  I told the  youth tonight I don't think they clapped because the music was overwhelmingly spectacular (not that it wasn't good).  It was far more than that.  They applauded our mission, our purpose, our journey.  That was a wonderfully affirming moment for me. 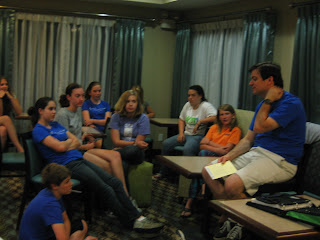 As a parent, I frequently find myself saying things that, well, I would never have imagined I would say.  "Please don't lick the TV remote."  "Please step out of the refrigerator."  That kind of thing.  Examples are actually kindof hard to come up with on the fly, but I always  know them when I hear them.

I'm having the youth offer devotionals this week (they work in groups of 4--we're doing it by room).  Eric M offered an interesting take on our mission during his part of the devotional.  He was talking about the leis we wear during the concert and then give to the audience when we visit with them, and he was making the point that we have no idea what these small gifts might mean to the recipients.  "It's like we share our true light through strings of plastic."  Now.  Please step out of the refrigerator.

But he's right.  How often do we find ourselves sharing the gift of Jesus Christ, moving hearts and employing hands through the seemingly mundane or insignificant?  A string of plastic.  A fleeting smile.  A warm greeting.  Gestures we toss to the wind, but to the one who receives them, a potential oasis in a sizable desert.


*+*+*+*+*
The concert this evening was perhaps not our best work.  I typically choose to be honest with the choir when this happens.  They know it wasn't their best; lying to them won't do any good anyway.  So we talked about why they thought we didn't sing to our potential.  They came up with a pretty long list of reasons why it didn't go as well as it could have (many of them valid...the piano at one point literally sounded like someone had dropped a basket of silverware on the floor).

One of their biggest gripes was that the audience (which was very small) didn't care to hear us.  Anecdotal evidence suggests nothing could be farther from the truth.  The audience did at times seem inattentive, but having talked to several of them, I know they were actually very attentive!  We made assumptions about them for a variety of reasons, none of which were grounded in fact.  And our performance suffered as a result.

Leave it to Mitchell P to keep it positive.  He reminded us that we have a tour ahead of us--ample opportunity to reclaim the excellence within and continue to share True Light with those we encounter.


*+*+*+*+*
Oh, just one more thing (like Columbo).  I'd like for you to meet our mascots for this tour: Jake and Elwood (of course!).  Corinne A and Caitlin S won them in our first game on the bus.  The first concert winners (which means they showed the most expression during the concert) were Steven M and Olivia P.  Congratulations, guys! 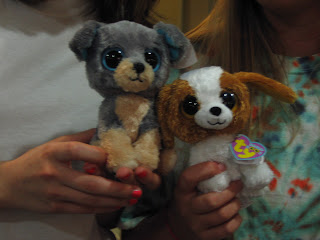 Jake is the one on the left.  Elwood on the right.

PS I'm very excited that tomorrow we'll get to watch the specially edited version of the Blue Brothers on the bus.  Many thanks to Perry P for prolific professional paring.

PPS Also, I neglected to mention above that we arrived safely at Owensboro, ate dinner, and everyone is safe in his/her room for the evening.

PPPPS Goodnight.
Posted by John at 1:18 AM