Day 1 Comes to a Close

What a great day...even if it wasn't exactly what I was expecting when I started out this morning.  If you know me at all, you know that means at least one story is coming...

Surprise 1: I have no voice.  It was gone when I woke up this morning.  It has not yet returned.

We gathered first at Embry Hills UMC to sing.  Good to see some old friends there.  And discovered that some of my old friends have connections to my new ones (turns out the parents of a chaperone's college roommate are members at EH). 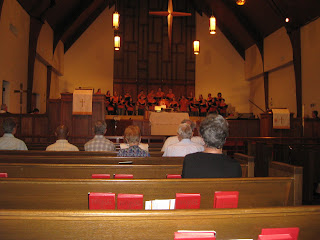 The service at Embry Hills went a little long, so we were pressed getting back to Decatur First to sing.  But we made it.  And we sang really well.  After we were commissioned, we walked out singing, and as we walked out the congregation applauded behind us.  Wonderful to feel the solidarity...the sendoff really made me feel that we are truly representatives of the church.

Unfortunately Olivia wasn't able to join us for this tour.  She's slumming it in Ireland with the Dekalb Youth Symphony.  So we brought along the next best thing.  I have to say the kids have really taken to her. 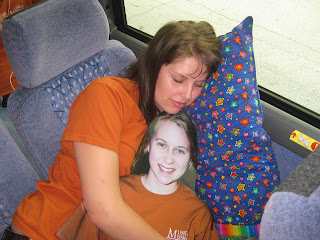 Once we got on the road, we played the "sorting hat."  This is the game that tells the youth who their roommates will be.  This year's game featured the Billboard number one hits from 1955 to 1999.  I won't explain here exactly how it worked exactly, but you gained points by identifying songs as they played from a CD.  Greg Zimmerman won the game, scoring more than two hundred points and winning the prize: a watergun for use at tomorrow's picnic.  I played only clips of most songs, but I played nine songs all the way through.  One of them was Macarena (you know this song from the 90's right?).  Anyway, some of them just couldn't keep still.  Fortunately our hands are never all that far from a camera...


Speaking of taking pictures.  Both Jonathan and Patrick decided to eat a "double down" at KFC today.  I wondered aloud if they'd rather just slice open their arteries and cram them in that way, but they chose to eat them instead.  If you don't know what this is, it's a chicken sandwich only it has fried chicken where the bread's supposed to be.  It shouldn't be legal...I'm not sure it is in 7 states. 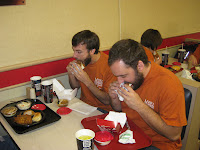 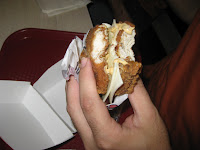 Speaking of Patrick, he and a couple of other folks were making Cheryl Gutteres proud today on the bus!  They were knitting.  And Patrick was wearing his Snuggie.  If you get a chance, ask him if he wears it at sporting events. 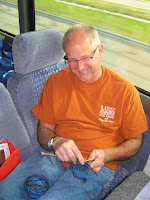 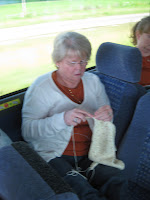 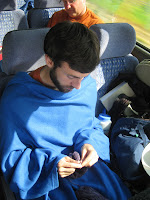 Now I mentioned today wasn't exactly what I expected.  While I didn't expect to see Patrick wearing a Snuggie, that's not really what I was referring to.  I called our venue to let them know we were going to be a few minutes late, and (after some amount of phone tag and consternation) discovered they were unaware that we'd actually decided to come today.  But the woman who I'd talked with felt really bad about this, so she set us up to sing at another place just up the road.  We thanked her and gave the new address to the bus driver.  Right before she hung up, she told us there might be 6 people at the concert.  No typo.  6 people.  Not the kind of audience I was thinking of, but a concert's a concert.  I warned the youth that we would have only 6 residents at the concert (in my voice's weakened state, they heard "presidents," which led to a whole other interesting conversation).  We went in and sang a good concert.  We delivered the prayer squares (more on those another time) to the residents, and we were on our way.  As we drove past the place I had scheduled us to sing, I pointed it out, saying, "Hey, if you look to the right, you'll see where we were supposed to sing."  My chaperones quickly corrected me.

"John, I disagree.  We sang exactly where we were supposed to sing."

I asked them to elaborate on that at our devotional time.  They were moved by how much our presence had touched the residents.  One cried (in a good way, I presume).  One said that she was a Methodist pastor's daughter, but couldn't get out to church...and that we had brought church to her.  One enjoyed so much sharing her stories with Daniel...and he told her, "That's very interesting."  They treasured the prayer squares (most of them received more than one because there were so few of them and so many of us). 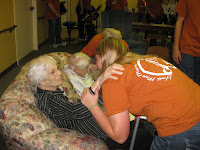 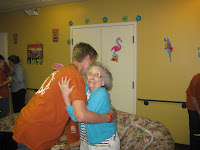 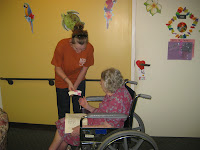 Our chaperones' sharing tonight reminded me that this is why we do these missions.  We do them to touch peoples' hearts and lives.  And I was reminded again that for whatever reason youth are particularly adept at doing just that.

Yummy dinner tonight at BBKing restaurant on Bealle Street.  Live music and good company!  Here's a pic of the table... 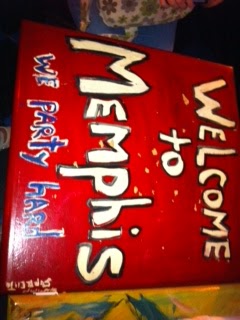 Finally tonight, Beth Sheley awarded our tour mascots, Boudreaux and Thibodeaux.  These awarded for smiling in concert or generally engaging the music and the audience.  The awards went to Lea Parker and Steven Mayo.  Great work! 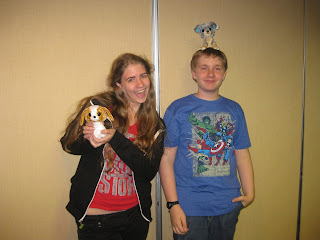 ~Captain Cuatro
Posted by John at 2:29 AM