The End of Day 2: Flexibility Is Fun

Such a great day.  I don't know quite where to start!

I guess first things first.  Olivia needed to eat some breakfast.  She was looking a little thin.  I thought she had a nice healthy plate in front of her, but Anna felt like she wasn't eating enough and decided to help her. 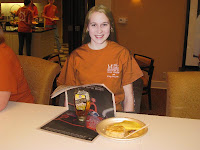 Some other folks ate too.  I do love the Hampton breakfast.  They didn't pay me to say that.  This time. 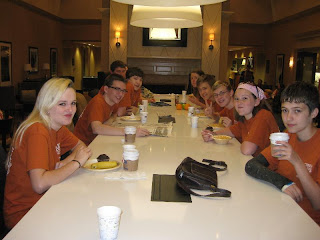 Our first concert today was at The Neighborhood School.  We've sung there before, but this year was very different.  We sang to kids from PreK4 through 8th grade, and the room was set with benches.  Well, actually we may have had something to do with that.  As Michele will attest, it's not easy to be a chaperone. 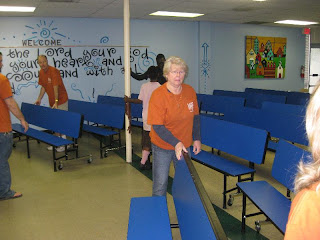 Thinking back on it, there were  a few things that made this concert so special.  Let's start with our youth.  Even early in the morning, the really brought it for this concert.  I challenged them to provide all the energy, and they did.  Most of them looked a lot like this for the whole concert... 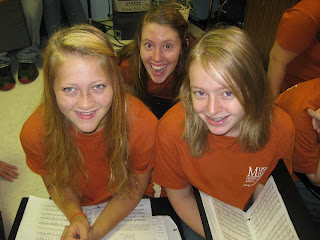 Then there were the kids.  They told us these kids are all from homes that struggle with all manner of difficult issues at home.  Addiction.  Prostitution.  Unimaginable.  But they were perfect.  Well behaved.  Attentive.  One of the teachers told Michele it was because they felt the spirit of God coming from our youth.  May be.  But I met those kids.  The Spirit is already within them. 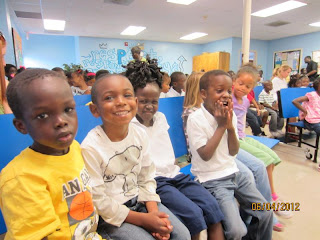 But the real reason for the success is in this man.  His name is Travis Crutchfield.  Before we started, he had the kids sing to us (and then we joined in).  After we sang, he asked us to repeat the last piece and had the kids stand to sing with us (he told them to make up the words if they needed to).  He is the director of spiritual development at the school.  The love he has for those kids inside oozes out of his pores.  He took everyone in that room to a place of...of worship.  This man is a hero. 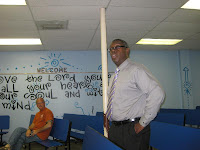 I have so many great pictures of our youth with the kids.  This might be my favorite.  Yes, Eric.  That is how you smile naturally. 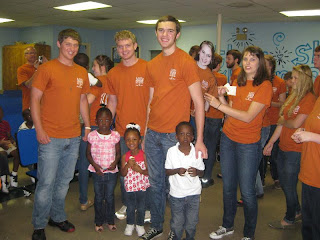 Wanted to put in a few closer shots as well... 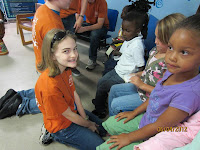 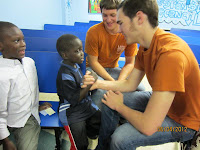 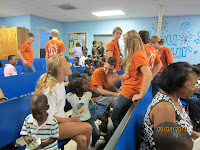 We didn't want to leave.  Really.  In fact, we so didn't want to leave that we didn't until too late.  That pushed us a little later than we needed to be for our next concert in Little Rock.  Fortunately they were patient with us at the next place.  And even better, Anna's grandparents were there, as were my grandmothers, mom, stepfather, and some other very, very special guests... 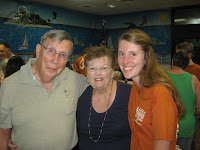 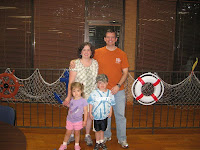 It was another great concert.  Good crowd.  Receptive.  A joy to sing for, and a joy to visit with. 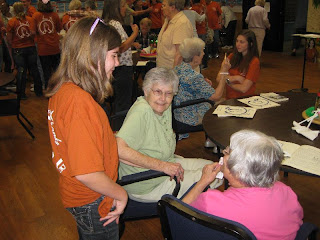 After the concert we went on the tour de john.  We drove around Little Rock, and I showed the youth some of my old stomping grounds.  Told some stories.  Just in general took a little stroll down amnesia lane.

Of course the rain followed us.  It rained out our picnic, but I think the youth enjoyed the time around the hotel just as much.  And I got to go out and eat with the family!  A nice little break.  We had early devotional tonight as well. 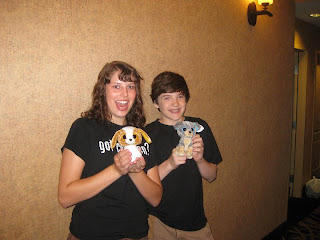 ~Captain Cuatro
Posted by John at 1:22 AM