"Often the hands will solve a mystery that the intellect has struggled with in vain."
--Carl Jung

Tonight, as I sit down to begin this blog post (which I will finish in the morning), I realized that a single line from a song stuck out in my mind today.  It's from "By Our Love."  "The time is now; come church, arise!  Love with God's hands; see with God's eyes."  Actually, it's just four words: love with God's hands.  I might have expected "love with God's heart" or some such.  No, the writer here is clear.  We are to love with God's hands.  Love is nothing if it is not active.  There is so much to learn from that.  For whatever reason, that motif frames my experience of my day today. 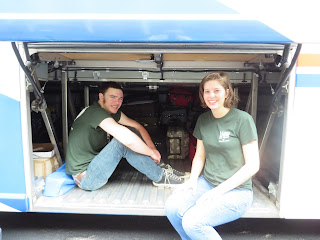 Helping hands.  This year I've done a much better job of delegating tasks.  Not surprisingly the trip is much more enjoyable, what with other folks doing the heavy lifting and stressing about getting the equipment set up.  Why has it taken me 9 years to find this out?  That said, there's something to be said for youth who step up without being asked.  Eric (and yesterday Caroline) just took on themselves to load our luggage onto the bus.  And speaking of the bus... 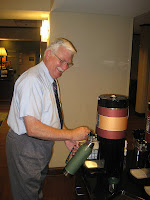 Yep!  Wesley has returned to us.  Finally!  After 9 years this is the first bus driver who has voluntarily accepted the assignment of driving us on tour.  I'm not sure if it's because we're so difficult or because we're too awesome for people to take it.  I like working with Wesley.  He's a professional and reliable. 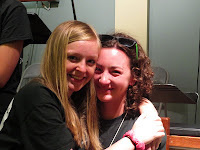 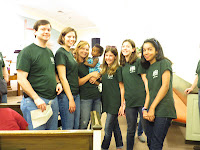 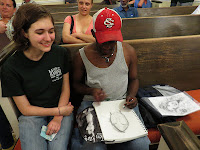 Our first concert was for the Interfaith Hospitality Network, who had us sing in a chapel at the Savannah Baptist Center.  Another strong concert!  More and more music from memory, which is nice.  We started a little late (our concert start time was actually the arrival time for the clients, so we needed to wait a bit).  More hands!  Michele took several pictures of the youth waiting for the concert to start.  This picture of Rosie and Courtney is one of my favorites.  A big part of why we do what we do is to come closer to each other.  In the next picture, Carolyn shows off who she would like to be our next singer.  She sat in the front row for the whole concert (frequently making commentary and shrieks of enjoyment).  We don't often have the chance literally to hold our audience in our hands.  Finally, there was a man there who is gifted at drawing.  He drew a couple of folks.  It occurs to me that when we sing for audiences, we don't often get to see their gifts on display. 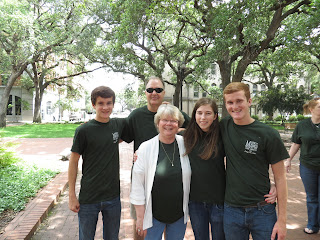 After our concert we toured Savannah a little...just a little, as there was a funeral in town that had a bunch of streets closed.  We picked up cupcakes too!  Yum.  I highly recommend that place.  So tasty.  While we were enjoying our cupcakes, we heard a guy playing violin, and he was playing Dvorak's New World Symphony.  We have sung a Kyrie to that tune, so most of the youth knew about it.  I asked if we could join him, and he agreed.  So he started playing, and we sang.  When we finished, he said, "Wow.  Chills.  Thank you so much."  That was fun.  This guy used to play with the Savannah Symphony before it disbanded.  He's really good.  Hmm.  Another person we encounter whose hands we get to see in action. 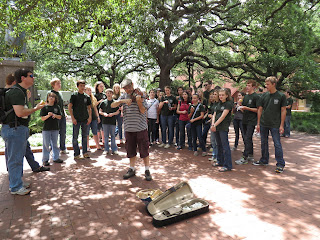 Sorry that the pictures below are so small.  It seems google doesn't want me to make them larger.  Let me tell you what's going.  The left one is a group shot in front of the Wesley statue.  In that picture, I can guarantee that at least 3 people look awkward, 5 are not looking at the camera, and one has a finger in his nose (well, if prior experience is any indication).  The second is a picture we took for our hero, Jonathan.  He's headed to Scotland to study comics, so we all donned masks and took this memento photograph.  Notice how safe we all are because Mitch (far left) has the photographer "covered." 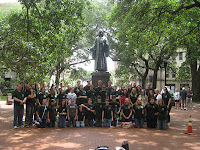 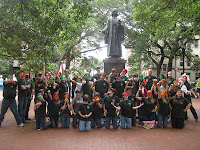 After these group shots, we headed down to the river...to sing "Down in the River to Pray."  We didn't actually get all the way to the river (and certainly not in it).  We stopped on a bridge that overlooks the river.  Several people stopped to listen.  It was nice to have a group large enough and with enough power that people a hundred yards away could clearly hear us and enjoy our singing.  After we sang on the bridge, we paused on another bridge to take a nice group photo.  The youth pictured are saying, "Isn't it a little bit hot for this, John?" 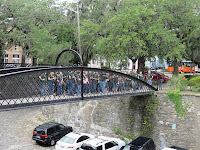 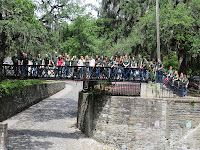 For lunch we ate at a place called Mudcat Charlie's.  Great food, and also a great view.  I'll admit I was a little nervous eating at a place called "Two Way."  I'm accustomed to my food traveling in only one direction... 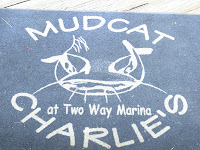 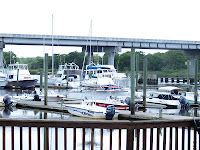 Deep in thought, Amanda and I debate the meaning of life.  "So what you're saying is that in addition to perpetual bigness, there's also perpetual smallness.  How is that possible?"  "What if C-A-T really spelled dog?" 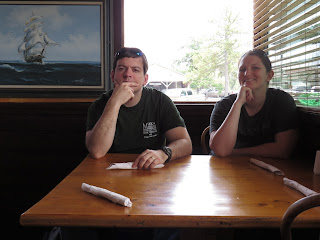 We haven't heard much from our flat singers this trip, but Mitchell donned a superhero mask to help us celebrate with Jonathan. 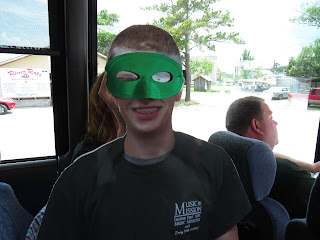 Our second concert of the day was at Magnolia Manor on Saint Simon.  The audience is much larger than it appears, as our sound rang down all the halls.  Many stopped me at their doors on the way out to thank us for coming.  Our hands reached beyond where we could see.  Rather, God's hands did.  Truly a time when we have no idea who we touched and how...just that we did, and it was good. 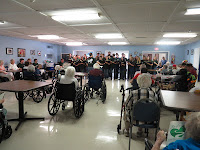 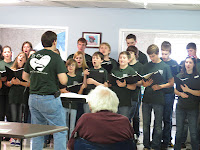 It's always fun to see family while we're away.  Daniels dad, grandmother, and friend came to the concert to see us.  Nice to meet them! 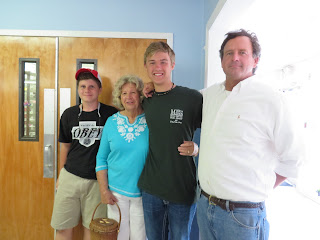 I picked the pictures below because you can clearly see our youth reaching out...with God's hands...to the residents at the Magnolia Manor.  I had asked the youth to interact so intently with our audience that I have to pry them away when it is time to go, and they have stepped up to that particular challenge.  Great job, guys! 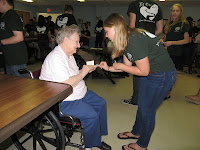 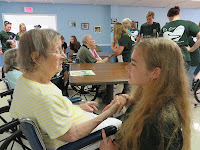 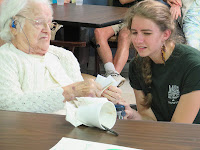 Unrelated question: does this make you believe your sheets are clean?  Me thinks he doth protest too much... 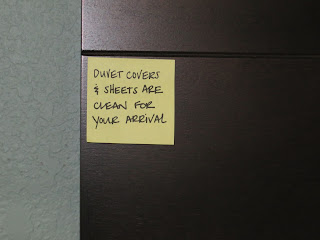 We had dinner down in the village, where I got lost and had to call the bus to ask where I needed to go.  It's always good when the director is lost in the streets and last on the bus.  At least I was among friends...

Devotional started early.  Alas, it went late because we had some business to attend to.  Nevertheless, this is one of my favorite parts of the day.  I told the youth about my focus on loving with God's hands from one of the songs and asked them what lines resonated with them. 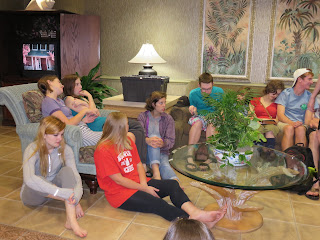 Of course we also awarded flair (not flare as previously reported; the editors apologize for the oversight.  Those responsible have been sacked.)  We also had some cupcakes left over, so Rhett and I awarded them like a sort of edible flair.  I'm not sure yet which the youth appreciate more. 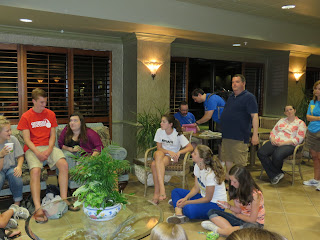 And that was pretty much our day.  It was a good one.  We have now sung to 3 audiences on the road, and all 3 of them were very different.  Children.  Adults in need.  Senior adults.  Kudos to Rhett for getting us great venues, taking us to those who need to feel God's touch, and kudos to our youth for taking the opportunity to love with God's hands.