"Do not wait; the time will never be 'just right.' Start where you stand, and work with whatever tools you may have at your command, and better tools will be found as you go along."
--George Herbert 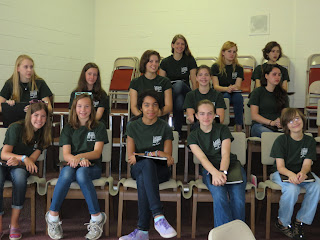 We started our day at Embry Hills.  Everyone was more or less on time, and we had enough time to do a proper warm up before singing in the service, where we sang most of our music.  I have to say the service went really well.  I saw a lot of eyes and a lot of smiles as well.  There was...one thing... 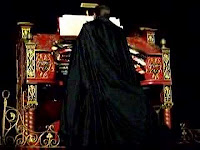 At the end of the closing hymn, the organ kept playing.  We've heard this from Mitch before.  He'll embellish the end of a hymn with a fantastic ending.  This was different.  Mitch was not playing.  I postulated that Mitch is actually a jedi organ master and was playing it with his mind.  There have been some more sinister suggestions, including the possibility that Mitch is in fact the Phantom of the Opera.  1000 points to the person who provides the funniest alternate explanation in the comments under this blog post.

This morning, David (Naglee, our pastor) came to me and said, "I hate to do this to you, but can you do children's moment?  I'm doing everything else in the service, and they'll need a break from me."  I agreed and set to thinking exactly what I could say.  There wasn't much time; children's moment was only a few minutes away.  True confession: I didn't sing the opening hymn.  Instead I started working on a very well-thought-out children's moment that started with, "Is there someone else who's supposed to do this?"  What I came up with was using the youth choir as an illustration of constant growth.  For six years, our choir has grown in number and quality every year.   That is a testament to their commitment to excellence...and one reason I enjoy what I do so much.

After commissioning, a difficult farewell to David, and an even more difficult goodbye to the family, we set out.  Notice how happy everyone looks when the trip starts... 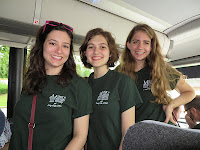 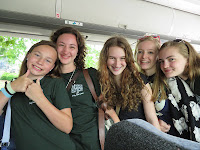 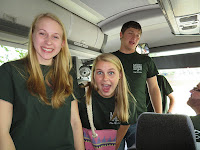 Our first stop was for lunch.  A few of us decided to visit the golden arches.  I wish I could explain its allure.  I heard the siren song and I couldn't resist.  Before we left, I figured out what it was.  It was the playland.  I'm a sucker for a good playland.  And it seems I'm not the only one... 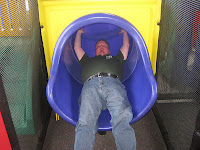 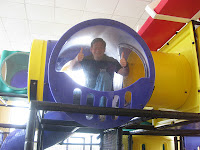 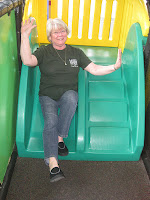 We have a few "flat singers" with us this year.  They formed up our first row for our concert.  There is a fourth flat participant, and I feel he'll make his appearance sooner or later.  He was in the audience for this concert, and Kelsey didn't get a picture from the choir out.  I should ask her to do that so you can get a feel for how this is from the singer's side. 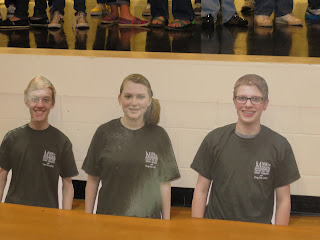 It was a great place to sing.  It was a gym, so I've sung in better rooms, but the setup was great, and the audience was amazing.  I've never had a crowd start clapping to the music within the first measure of the choir's entrance.  And that was par for the course.  They were appreciative and attentive.  I wish I'd had time to look at the campus of the children's home.  It is a remarkable place that serves a great need. 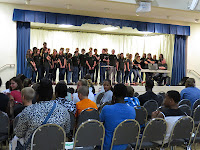 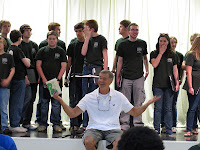 After the concert we checked into our hotel and headed to historic Savannah.  Turns out you need a bus permit to go there.  Would have been nice to  know.  Fortunately all it did was add about a 15 minute walk to our evening, as the bus dropped us off away and we hoofed it in. 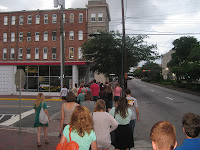 It was a late night by the time we returned.  We had devotional, which is different this year.  First each chaperone presented a piece of flair to a singer (a button, conveniently labeled "flair" on brightly colored paper).  Singers will display these on their tour tshirts when we sing.  There will be a prize for the singer with the most pieces of flair at the end of the week.  The early lead is to...ERIC?  He now has 2 pieces of flair.

After the distribution of flair, we talked about our day.  I did this like I do with my kids at home.  I asked individuals specific questions.  It got them talking, which was nice.  We have to get to our thank you notes tonight, though...it was too late last night.

My voice is not in good shape this morning.  I fear I might be losing it.  I wish I were kidding...
Posted by John at 7:27 AM