“There is no real ending. It’s just the place where you stop the story.”
― Frank Herbert

I'm about 12 hours late with this posting, and I hope a few people read it!  Here's the detailed post from our last day on the road.  We arrived back at the church at about 7:30pm.  I'd like to get this post written before the VBS madness begins (which, in a sense, it already has).

I've enjoyed looking for quotes to accompany each post.  I think about what frames my thinking on a given day, and then I find a quote that goes with it.  It's obvious that the ending is on my mind at this point, but as usual it's not as simple as that.  Because it's not really the ending.  Like Herbert said...it's just where we stopped the story.  Our stories as individuals will continue, as will the story of our choir and its mission.

We arrived at our final venue in time to have a warmup.  Good idea.  We were able to remind ourselves of how a couple of the pieces went, the words having been lost in the waves the day before!  It set us up for a good concert though.  And it gave us a chance to take this group shot before the concert started.  I reminded the choir at the outset that this is the last time this choir will sing together in this configuration.  Ever.  Don't hold back.  Leave it all on the field.  And they did. 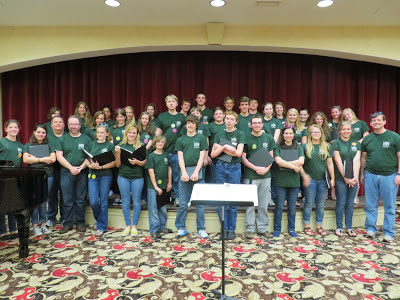 And this is awesome.  Since we had a couple of minutes, and since there were some folks in the room, a bunch of singers went out and started visiting before the concert started.  Wow.  A very proud moment.  Our youth understand what we are doing and why we are there...and that even though music is important, it's not the point. 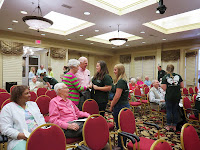 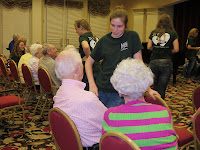 We had a couple of folks with family at the concert as well... 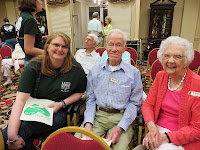 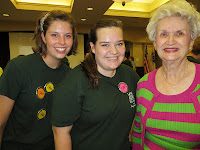 The last concert of the tour is like a box of chocolates: you never know what you're gonna get.  Fortunately, the final concert was strong musically.  We were all tired from a week of singing and, more to the point, a day on the beach.  Nevertheless when the music started, everyone dug deep and made it happen.  Great work, guys!  I included just a few pictures from the concert, including our power alto section, which won a flair award as a section, the solo group for "Down in the River to Pray," our dramatic component (which went superbly every time out...wow!), and some of our guys, consistently praised for their willingness to man up and send the sound! 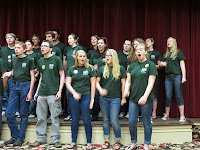 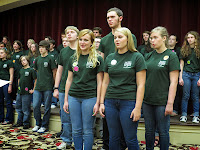 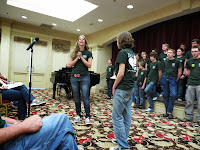 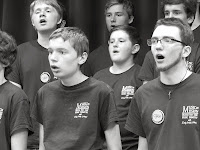 We had a couple of alumni from the youth choir on tour this year.  It was the first time anyone had taken me up on my invitation to come along.  I'm glad they came.  They added a lot to the concerts and to the tour as a whole.  And I hope more alumni will join us in the future!  Thanks, Marshall and Kelsey! 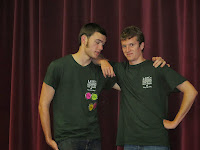 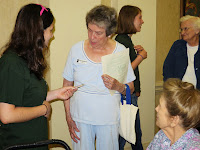 Our last venue was also kind enough to offer us lemonade and cookies.  Mmmmmmmmm. It's also worth nothing something else about this picture.  You can see people from both Embry Hills and Decatur First here.  That wasn't staged.  In fact it was commonplace.  Our groups merged easily into one.  If I hadn't known two churches were represented, I wouldn't have been able to tell. 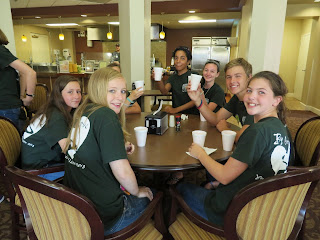 It took us a bit, but we did manage to find a location for our final devotional.  We wrote about the things that went well...and the things that could have gone better.  We signed the senior tshirts and the cutouts.  Chaperones awarded the final pieces of flair (and the winner of the flair contest was Eric, who will receive lunch at Waffle House with me).  Then we headed to the bus for the return trip home. 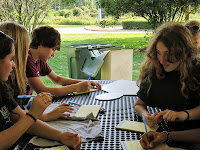 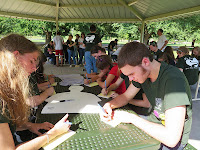 As is our custom, once we got back on the bus it was open mic time for the seniors.  They are free to say whatever they'd like to the choir.  It's a time for goodbyes, advice, and sometimes just straight up comedy. 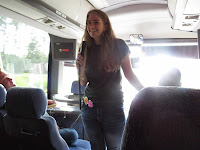 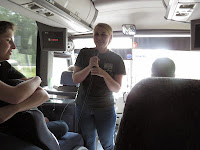 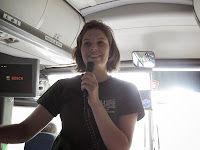 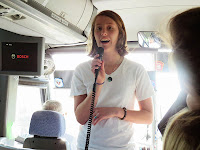 Riley didn't want to talk, and that's ok too.  But she still came to the front of the bus, and she's still in the picture below.  I'll miss you, guys.  You've helped make this year special.  As Wesley (my son, not the bus driver) wrote me in a note the day we left, "Don't be a stranger." 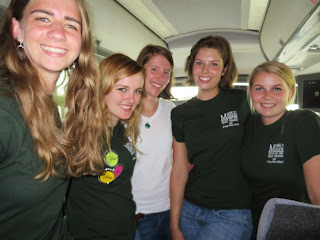 As always, we welcomed our driver into our choir with a shirt.  We also awarded him a piece of flair for his outstanding work (and took up a collection for him!).  Great driving, Wes! 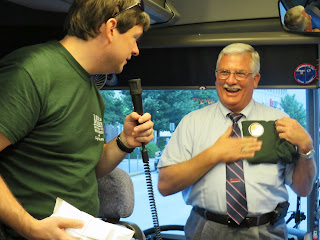 And then...we all fall down. 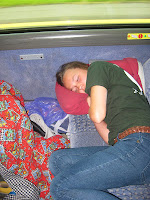 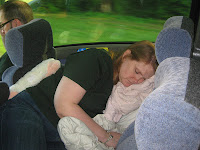 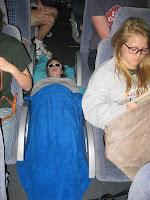 That ties the ribbons on it.  It's in the books.  My ninth youth music mission.  My sixth at Decatur First UMC.  I love it.  I just hope the youth had as much fun as I did.
Posted by John at 10:08 PM