"When you set yourself on fire, people love to come and see you burn."

I posted yesterday (Tuesday...remember I write the epic posts the next morning!) about Amanda's passion for the elderly and how she let it show.  This morning as I combed through the pictures to find which ones I would use, I realized that we had many pictures that revealed the passions of those in them.
For example...  Rhett is a harp player.  Andy, our host at the homeless shelter and a good friend of Rhett's, is also a harp player.  After we had scoped out the venue and sent the runners to bring the choir and equipment, Rhett and Andy started talking about harps.  I was so amused I snapped this picture.   While I can't accurately reproduce the conversation (because I'm not nearly as passionate about harps as they are!), it went something like this: "So what harps do you have now?"  "Well, I have the L38 that I'll own forever.  Then I have this other 1472."  "Really?  What finish is on it?"  "It's walnut...but not the dark walnut.  It's the lighter one."  "I see.  That's a great harp."  Kid, meet candy store. 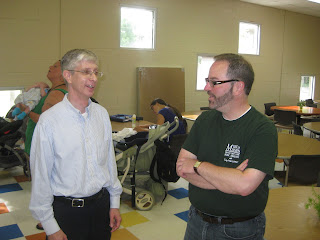 The venue was a little tight (though not as tight as the next concert!).  The audience was a mixed bag of people really, including a significant number of staff.  Unfortunately time did not permit us to visit with them after we sang, and the youth let me know that this is unacceptable (which of course made me exceedingly proud of them). 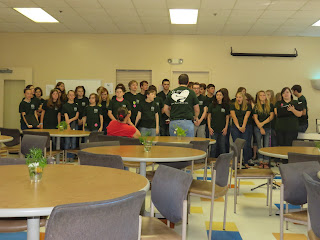 The center gave us lunch in their children's building.  Sandwiches and stuff, and they were very tasty.  I've been trying to figure out what I think of the artwork in the background of this picture.  It was commissioned for the center.  I wish I could talk to the artist about it. 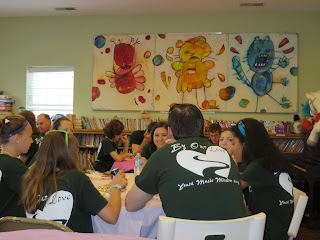 Kelsey, it turns out, is passionate about our environment.  For many years she has been responsible for the recycling bag on the bus.  She upped it to a new level this year when she gathered up all the recyclables from lunch and toted them to the bus because there was no place to recycle in the center. 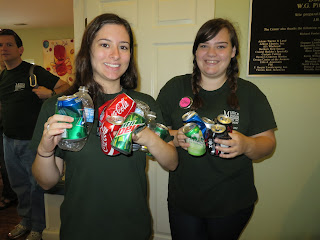 Curt is passionate about...being a smart aleck.  He and Michele jumped off the bus just down the street from the center to make this funny picture at the prisoner intake door for the jail.  His passion very nearly got him arrested, as they really don't want you to take pictures of the jail.  The things we do in pursuit of our passions... 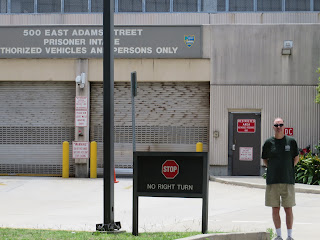 In the morning concert, we sang all but our closer from memory.  So when we got to the hotel, we went into our meeting room and spent some time finishing up the memorizing on the last piece.  As a side note, John is not allowed to accompany the youth choir ever again.  At first it was fun...then it was funny...then it wasn't funny. 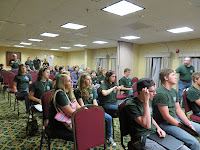 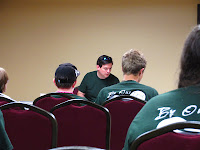 The hotel here really rolled out the red carpet for us.  They had everything set up and even had this great sign.  Heck...after an hour or so they even put a door on my room!  (when I arrived there was a contractor working on the installation).  As far as I know everyone else had a door from the outset... 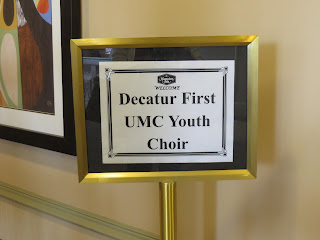 After a relatively quiet start to their trip, Kate, Andrew, and Mitchell seem to have had a pretty good time yesterday.  Nice to see them mingling with the other kids too.  They had been keeping more or less to themselves. 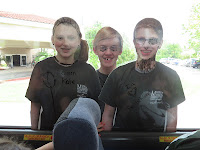 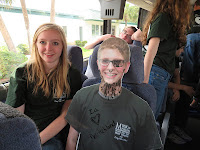 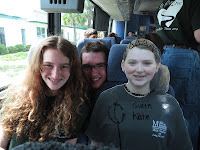 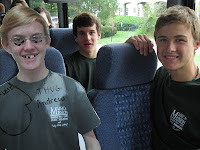 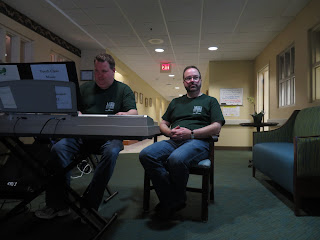 Here are several pictures of our kids singing.  It's hard to get a photo of all of them smiling at once, but the chaperones all agree that they are nearly constantly engaged. 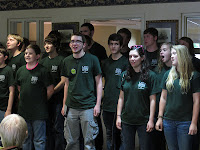 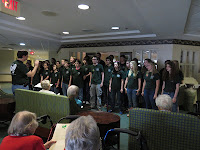 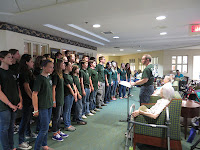 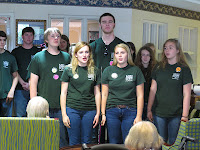 Two pictures that really show the passion for what we are doing...Caroline singing "Ain' Got Time to Die" and in the next picture a great picture of the alto section.  Michele commented last night that she thought the section deserved a piece of flair en mass for their excellent work. 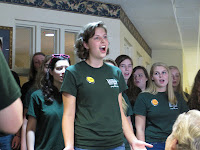 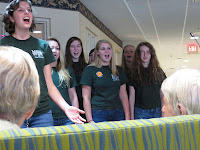 One thing I added to the program this year was a dramatic component.  I wrote a script for two of the youth (Lea and Elli) to act throughout the program.  They are talented!  It ties it all together and also engages the audience in a different way.  You may or may not know that Lea is headed to college next year and will be studying drama.  You can see how much she loves it. 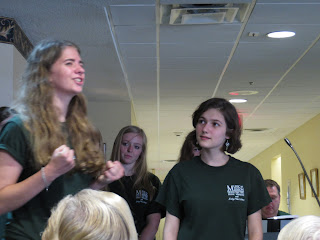 I commented in our devotional time last night that I'm beginning to wonder why we bother with the musical part of the program.  The audience enjoys our visit with them as much or more than the music I think...almost like the music just gives us a reason to gather them in one place and gives us something to talk about.  The youth may not tell you this, but they love it just as much.  They are always eager to share the stories they learn. 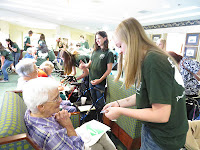 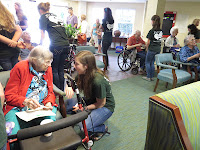 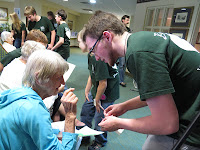 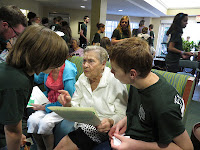 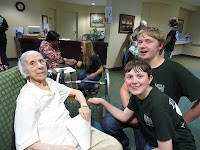 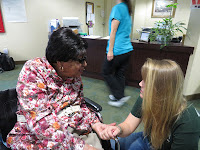 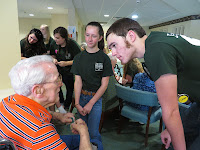 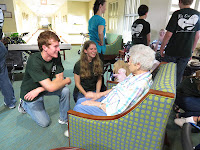 And at least one youth, typically reserved in front of the choir, lit up when she went to talk to this guy.  Apparently he started singing to her... 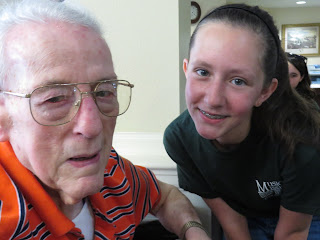 For dinner we went into old town St. Augustine.  We'll actually go back there tonight when we'll eat together.  But last night it was in groups.  I ate with Patrick, Greg, Amanda, and Michele.  While we were walking to the restaurant, we found this little place and had to have a picture.  Yes, it does in fact say, "Rhett's Piano Bar."  Rhett hadn't told us.  I wonder why. 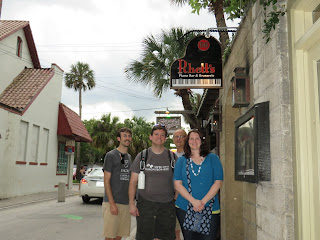 After dinner I went in search of ice cream and located a great little place.  Well, Theresa helped me find a great little place.  There was a group of kids already there who invited me to join them.  I had no idea where they were, so she kindof talked me down.  It was amusing...like one of those scenes in the movie where two people are talking on the phone until they meet when they hang up and continue their conversation.

I went in search of gifts after ice cream.  I still haven't found the gifts for my seniors, and time is running short (as of this writing, I'm still looking!).  Along the way we came across a guy who was preaching on the street corner.  About half the youth passed him at one time or another.

When I asked about him a devotional, Eric pointed to something I had noticed as well--and found curious.  The street corner guy was clearly preaching salvation through Christ as you'd expect.  Much of the time he was not as much preaching fire and brimstone.  Several folks then agreed that his message was not dramatically dire though his delivery certainly was, which created a cognitive dissonance.

Or maybe some of us just didn't listen long enough.  There were those who heard him say that if you did not agree with him you were forever condemned.

They were aiming to send a message to him.  They wanted to express to him their belief that at our best we spread the gospel of love through love.  I think he missed that.  He appreciated them and felt encouraged by them.  He liked what they did and felt affirmed by it.

As I write their story, it occurs to me that this is the true miracle of Christian love.  The true spirit of Love is affirming.  It is encouraging.  It builds up.  Or perhaps...

"Love is patient, love is kind. It does not envy, it does not boast, it is not proud. It does not dishonor others, it is not self-seeking, it is not easily angered, it keeps no record of wrongs. Love does not delight in evil but rejoices with the truth. It always protects, always trusts, always hopes, always perseveres."

We could have kept talking at our devotional, but the hour was late.  I asked the youth to keep thinking and talking about it.  We approach making disciples very differently from this guy.  Nevertheless we have commonalities as well.  How are we like him?  How are we different?  Most importantly, why are we different?

After some reflection, I can answer that for me.  It's where my passion lies.  My passion is not conversion.  My passion is compassion.  When I am my best self, I love everyone and seek to build them up--following in the example of Christ.  When I manage to do that, I find myself fulfilled.  Tuesday taught me that many of my youth share that passion for compassion.

Wednesday: the beach!  (Spoiler: I've already been this morning, and the water's just a bit cold until you jump in and get used to it.  Also the current runs right to left, strongest 75 feet or less from the shore).  Will post some lessons I learned from the beach this morning after a while.  I'll be leaving in about 10 minutes to go in search of food for the multitude.  What to buy, what to buy.  Loaves and fishes?