"The ocean is a mighty harmonist."
--William Wordsworth

Today was our beach day.  I'd say we didn't do any singing, but that wouldn't be quite true as you'll see in a bit...  I started my day early as usual.  There were four of us ready to hit the beach before 8:30 or so.  Greg, Carolyn, Hudson, and me.  Hudson was...well watched.  The first order of business was to check out the currents...best done from the water, of course!  Then a little football with Hudson, who can throw a football embarrassingly better than I can.

After a while more folks came out.  One of the first groups decided Olivia looked like a mermaid...or needed to look like one.  Greg provided the crown to complete the ensemble. 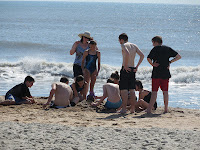 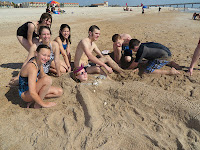 The younger guys decided Matthew needed to be a merman, so they buried him as well.  And in an impressively imaginative moment, they decided he should be a merman that had come on the shore and tried to stand up.  Way to buck the trend, guys!  PS the crown really adds a nice finish. 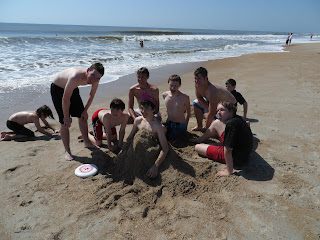 I'll insert here that I did much better this year about keeping the kids from getting burned...well, the chaperones did actually.  Anyway, we did have a couple who burned, which is unfortunate.  Last night when I saw him, I observed this strange tan line that looked like he had been wearing one of those short workout shirts from the 1980's.  Do you remember the ones I'm talking about?  Anyway, now I see where the tan line came from.

Another who may have had a bit too much sun (or too little sunscreen) is Bennett.  But he had a great time doing it! 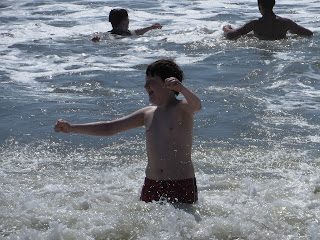 And while the ocean has most of the water around here, it doesn't hold all the water.  There's a pool too, pre-stocked with beach balls.  Now this looks like a fun game.  I don't know the rules... 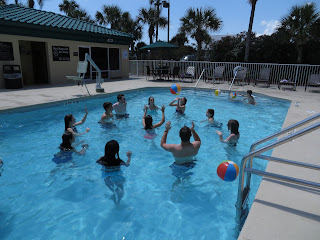 We wound up having lunch in the hotel because it was hot outside.  Rhett, Mitch, and I went down to Publix to get stuff for sandwiches.  A quick head count to make sure we had everyone, and they were off!  I was a little surprised at how quickly they went through all that food, though I don't know why.  Well, and they didn't actually get through it all.  We had a significant quantity of leftovers.  The hotel manager offered us some space to keep them, but instead we gave it all to the hotel staff.  I wonder if their workroom is like ours at the church...

At 6:00pm we left for dinner.  We went back to the historic part of St. Augustine to a little pizza place called Pizalley's.  Wow!  Great pizza.  The space was a little small, so we were split into a couple of areas.  But it was fun nevertheless.  There has been some discussion this week about my playing of the spoons and also my talent for balancing 2 forks and a toothpick on top of another toothpick.  I demonstrated both at Adrian's request (she actually had to go in and get the appropriate flatware).

I also demonstrated the non-magic-trick downstairs.  Then Hudson, Allyn, and Daniel tried unsuccessfully to repeat it.  Then this totally random stranger came up and showed them again how to do it.  Then he left.  I kindof wish I'd been there to see that. 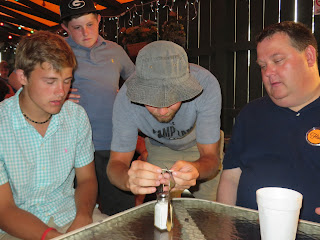 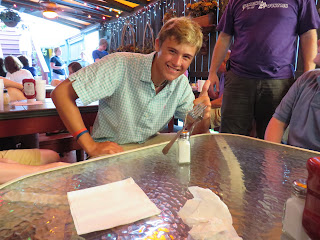 When the servers found out we were a choir, they said, "I wish we could hear you sing."  Muahahaha.  EXCUSE TO SING A SONG!!!!!!!!!  We did an a cappella rendition of Praise His Holy Name, complete with a couple of folks filling in the piano interludes (William, I'm talking to you).

Because we were split up for dinner, we walked to the fort to do our senior night activities.  We gave the seniors tshirts to remember us by and celebrated all they have done for our choir. 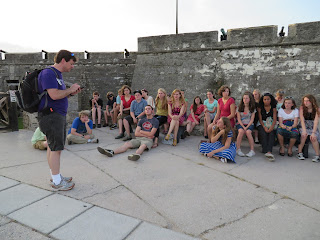 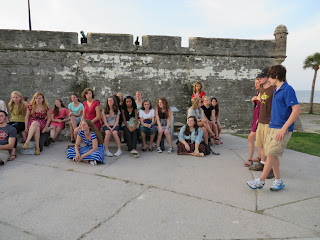 And speaking of senior gifts, I gave Rhett a captain hat.  Mostly it's because of his insistence on doing airline jokes with the bus microphone. 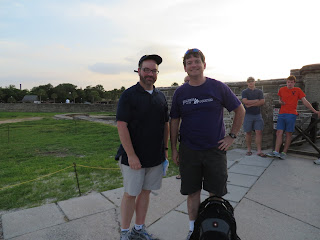 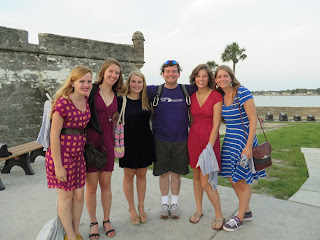 When we got back to the hotel, I told the youth to put on shorts and beach shoes so we could to our devotional on the beach.  We went about 30 feet from the water and stood in tight concentric circles so everyone could hear.  We locked arms. 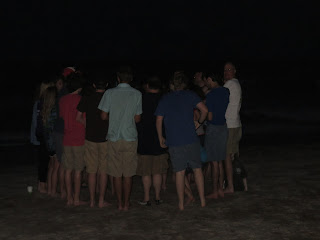 Then we started singing.  Down in the River to Pray.  As we sang, I moved the whole group toward the water...and into it.  Not too far, just to the edge.

When we finished the song, I gave a short devotional.  I shared that early in the morning, I got out in the ocean far enough that a large wave took me off my feet and turned me over.  I had no control, powerless to do anything except ride it forward until it let me go.  Then I walked up to the beach and turned around.  Looking out over the ocean, I felt small and insignificant.  And we are small.

But we are also more powerful than the ocean.  For a week now we've been changing lives for the better.  We've been moving people's hearts.  We've touched people in a way that even the mighty ocean cannot.

After that, Rhett gave a devotional on baptism, including reading the blessing over the water.  Powerful given the water running over our feet.

Finally we sang the "Our Father" from our program (in French, 4 part, a cappella!  Woohoo!).  Then we headed in to get ready for bed.

Today we have one more concert and we head home.  I'll update this blog at least once more with pictures from today and some final wrap up.  I may or may not update it during VBS.  You remember how well I did with that last time...