Time to start working on Monday's epic post.  I put a lot of pictures up here last night.  I think I mentioned that we got in at a much more reasonable hour.  So they youth hopefully got a little more rest.  That said, yesterday they did remarkably well given their late night the before.  Let's see here...

We call this guy DBJ.  Dashboard Jesus.  He's riding in Chaperone 1 (which you may recall is the name of the van that carries a few of our chaperones because we have more than can fit on one bus!).  But I digress.  At first I laughed when I saw DBJ.  That was before we realized how important he is to the chaperone universe.  Let me explain.  No.  There is too much.  Let me sum up.

A police officer, a van trying to catch up to the bus, and DBJ are all within 100 feet of each other.  What happens?  Nothing.  Absolutely nothing.  Why?  Because DBJ, that's why.  Fast forward a little bit.  The chaperones need an extra cup holder.  So DBJ gets moved.  Let me just interject that I can't understand why they didn't put the water in the cup holder and then put DBJ on top.  But I digress.  Again.  Anyway, DBJ wasn't at his post.  As a direct result, the van followed the bus through a toll plaza.  Without paying a toll.  That's a $400 fine.  The parents among you will recognize that dollar figure, I think.

"Put DBJ back in place!"  So they did.  Then they turned back to figure out how to pay the toll.  And DBJ helped them catch back up to the bus.  Thanks, DBJ.

Let me say this is not product placement.  One of the reasons I love staying at Hampton Inn is that they have a small hot breakfast.  I mean, it's simple.  But it's good.  And they have waffles  you can make.  I took a picture of my plates this morning.  I'll post those tomorrow.  The breakfast place is also a great place to catch up.  Like right now.  I'm typing on the blog while Jonathan gives Bennett a hard time about his bed head.  I don't think we need a picture of that.  But how about a few pictures of folks enjoying the breakfast food and fellowship?

Also during breakfast yesterday, I had to get in touch with the venue and tell them we were going to be late.  That was no problem as it turns out, but I was nervous about it.  Apparently Kim got a picture of me stressing about that particular phone call.  That's me in the background.  Fun comment game (submit answers below): what is the contents of the text that Mitch is reading here: 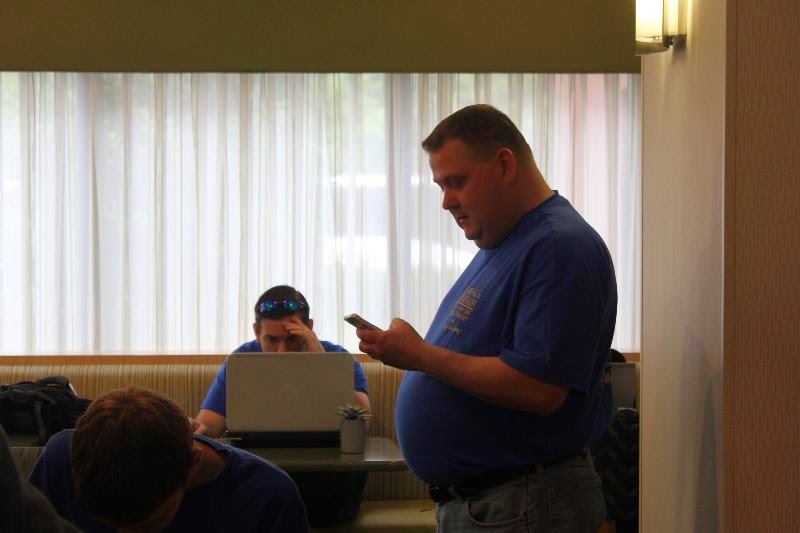 This was our venue Monday.  It's a Methodist retirement home in Richmond.  It was a nice big room, complete with a stage and a piano (2 for 2 on venues where we don't have to take in the keyboard, which is good because we've been running behind to both...hoping the lack of long distances up here will correct that for us!). 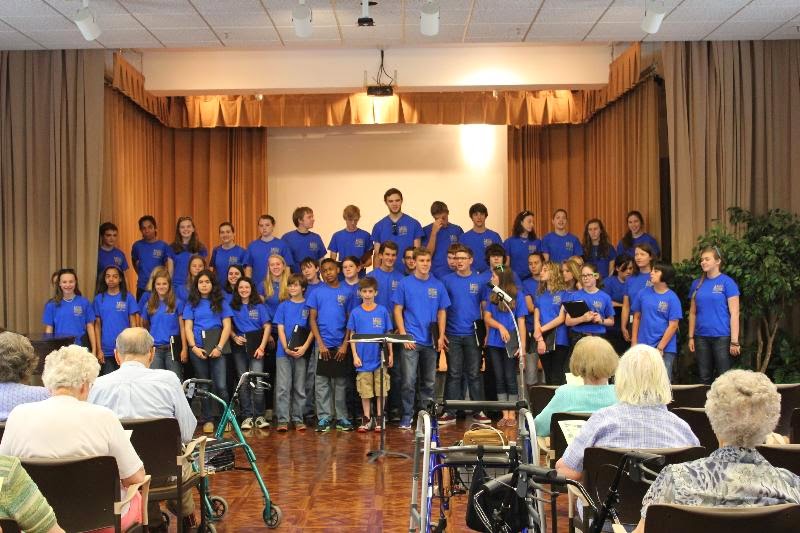 Couple of pics from farther back.  Because America, that's why.

And a few closeups.  It's funny.  Some of these youth smile all the time for the whole concert.  Some of them smile only once per concert.  But they all look very nice and pleasant when they smile, and Kim managed to catch some good pictures of that.  And before you cry foul over the gender exclusive fact that these are nearly all pictures of girls, it's the law of averages at play.  If they want to be featured in the world-famous choir tour blog, they'll need to smile more.  I'm just sayin'...

...which is not to say they don't have personality.  It is, after all, the tenors that started the choreography for "He'll Make a Way."  Check out Andrew back there.  And Steven.  Note to self.  They aren't allowed to stand next to each other anymore. 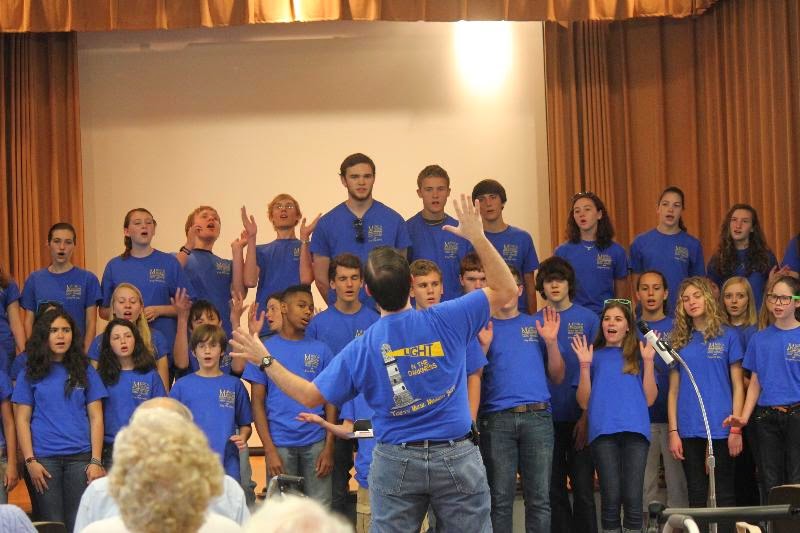 Like I said...good concert.  But the best part was, as it frequently is, the visiting afterward.  I'm not sure who's happier in these pictures: the seniors or the youth.

After the concert we headed to lunch.  It was our normal "we're on the road, so just find a place where there are lots of choices and kick everyone off the bus for a while" meal.  The kids get tired of that pretty fast.  It's not because they're picky, at least according to Tric.  She took a picture of the pizza below--and she shared with me that it was quite possibly the worst pizza she has eaten in her entire life.  That judgment pronounced after a single bite.  I didn't ask if she spit it out.  I don't think I want to know.  I had Chipotle, where I pondered the deeply philosophical question: why would you make a Mexican place with no cheese dip? 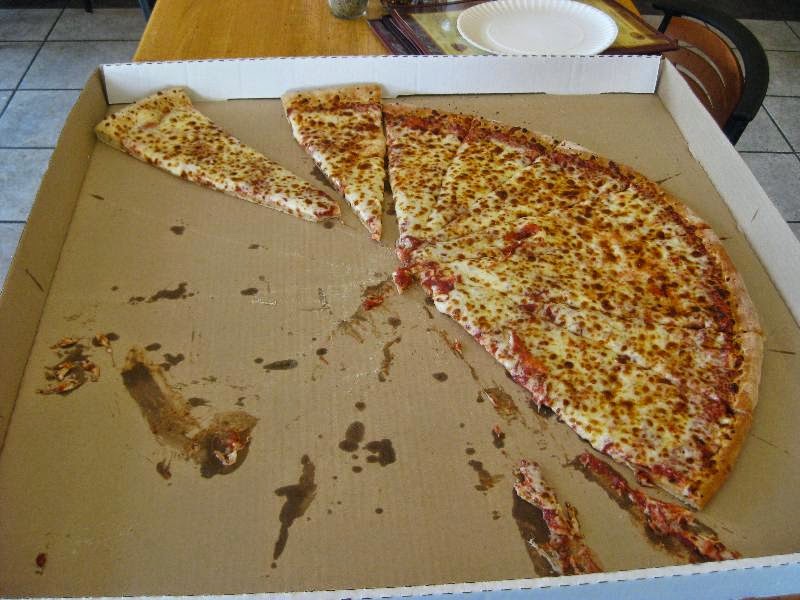 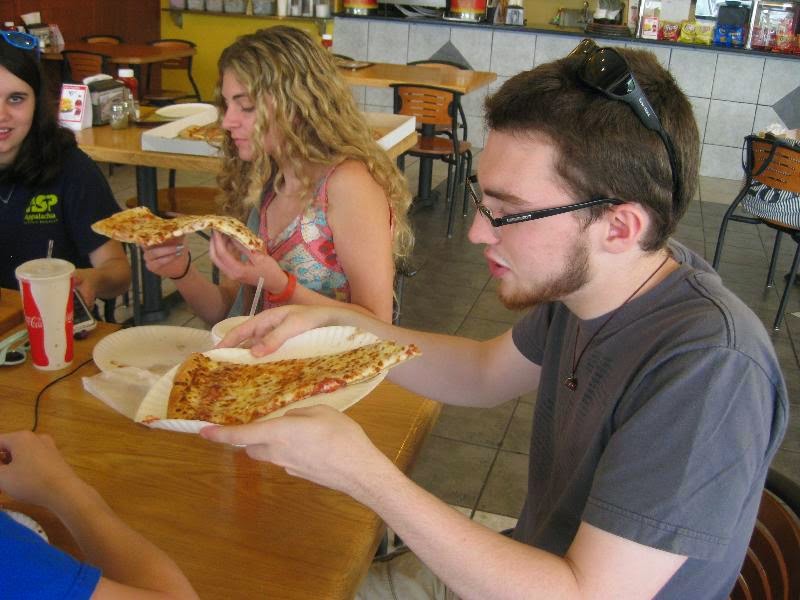 Opened up my email and realized I forgot to post this picture from Sunday's concert.  These are Katie's grandparents who came to see us.  Always great to see family!

Up for today, we're singing a concert this morning, eating lunch, singing a concert in the afternoon, heading to Rhode Island (which I now believe exists because Paul is from there!), going to the Cliff Walk (of which I'll send pictures later...it sounds cool).  Then to the hotel.  We really need to have devotional in the hotel tonight!  Kindof looking forward to that.

And dinner.  We need to eat dinner.  I'll have to find the best place to do that from the Petersens.

To the day!  Thanks for checking in.  The served in mission number did not change overnight...