Starting out today with an admission of my jealousy of Jerry Hudspeth's smile.  Though it's rarely seen in concert (had to make a bet in order to see it), it can frequently be seen at breakfast.  Looking at the picture below, it occurs to me that we're all the time talking to the youth about smiling...perhaps we should mention it to Mitch! 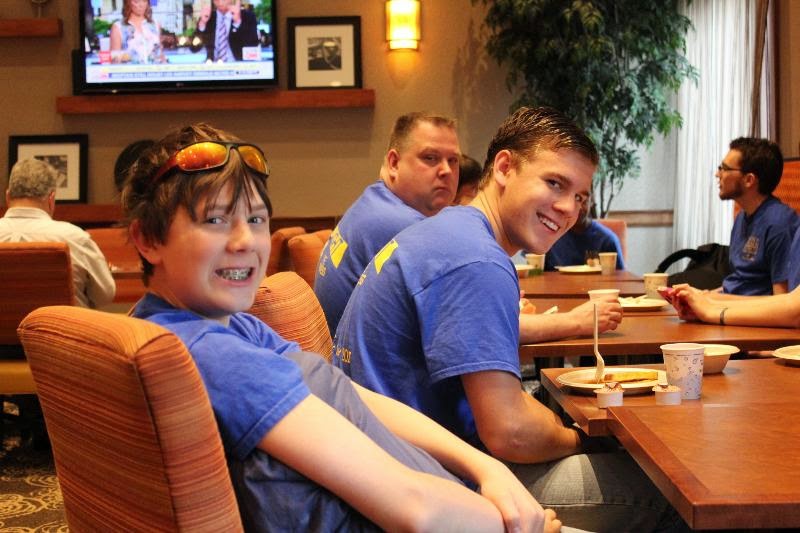 Nothing says "tourist" like a backpack with camera, location specific sweatshirt, and personal water bottle.  Wow.  What a dork.  But seriously, thanks to Kim for the sweatshirt!

We gathered for a group picture at the beginning of Long Wharf.  Yes, yes.  That's Andrew on the ground at the front.  Again. 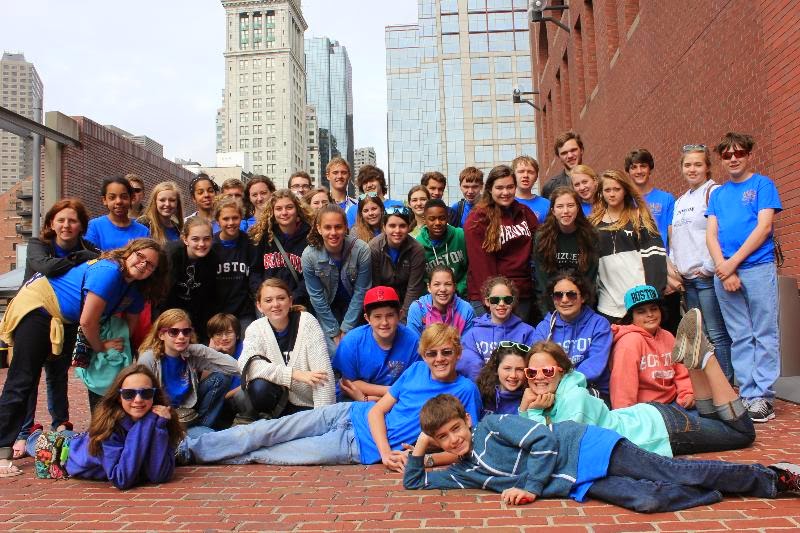 Ummmmmm...  Apparently strange things happen when I walk away from the group?  I left to get our harbor cruise tickets.  I could be wrong, but this looks a lot like concert formation.  To my knowledge we had no concert scheduled at this time.  Can someone please fill me in? 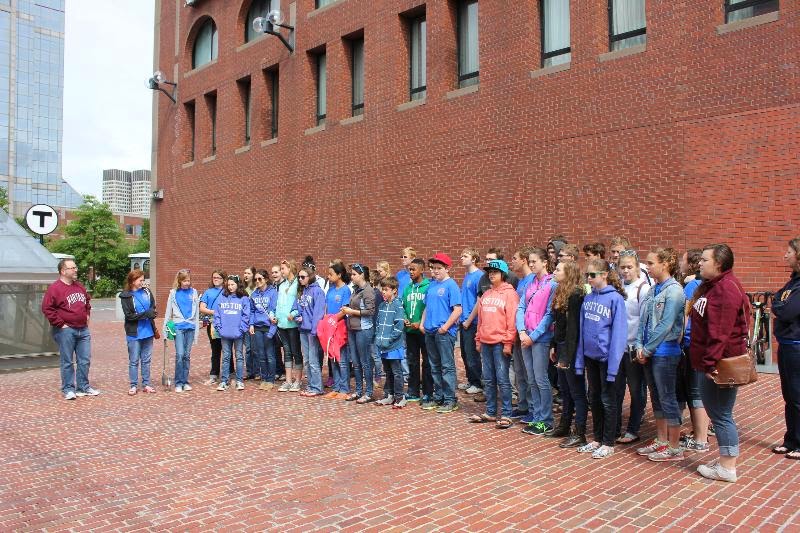 We went on a 45 minute harbor cruise.  The narrated cruise told us about the waterfront and associated landmarks as well as letting the chaperones relax a bit because the youth were all held captive onboard!

After the cruise we went back to the Quincy Market for lunch.  This is a pretty cool place.  Lots of shopping and options for eating. 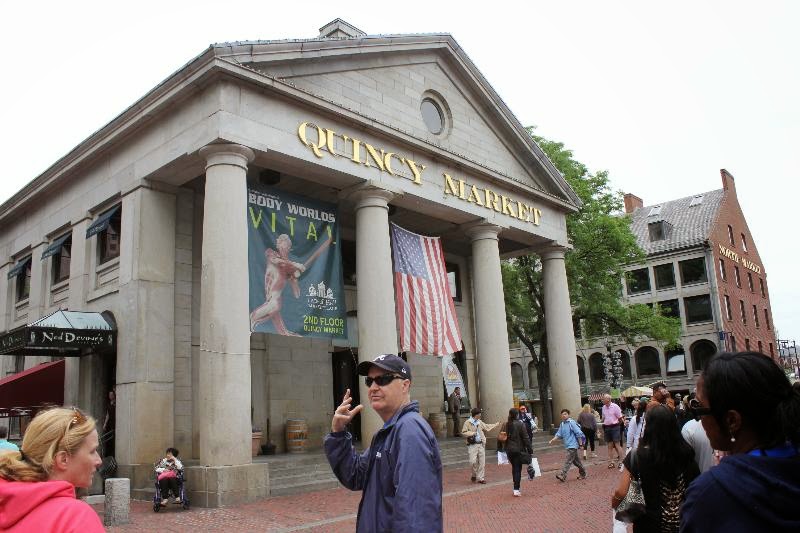 And there are some interesting characters milling about.  I didn't know they were in the business of giving 5 back in the late 18th century.  Shows you what I know! 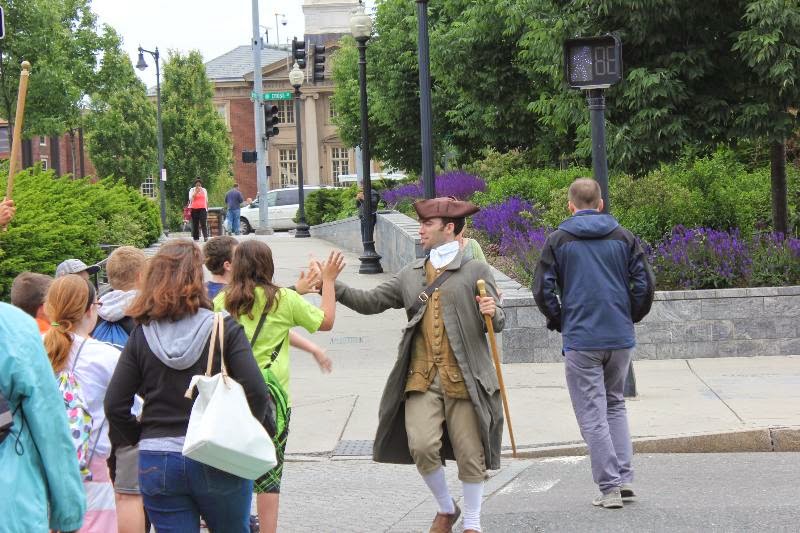 After lunch we headed to our final concert.  Kim got this nice picture of Riley.  She's a first-year alumna, so she came along with us.  She's enjoying having the freedom to sing with us or cut up dance make faces be ridiculous sit in the back with the chaperones. 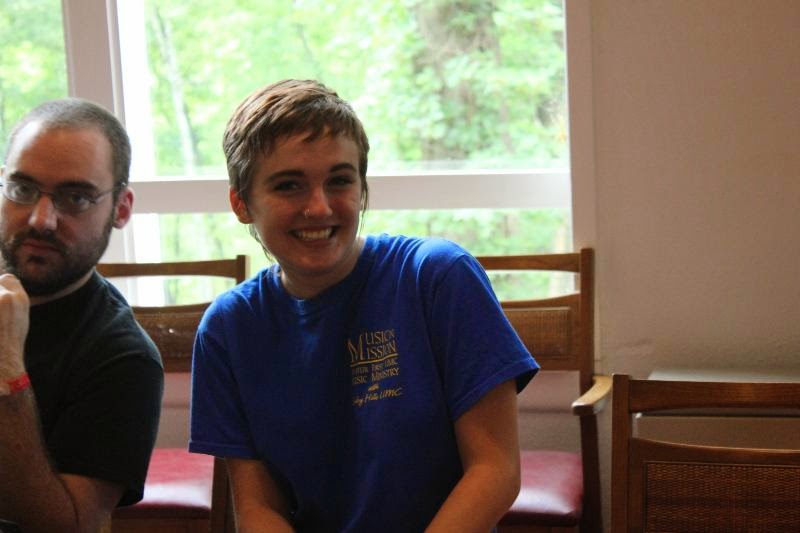 "We are the three amigos..."  I think in the next frame they do the 3 amigo salute.  Unfortunately the footage of that event (and all associated photos of these three in sombreros) has been lost. 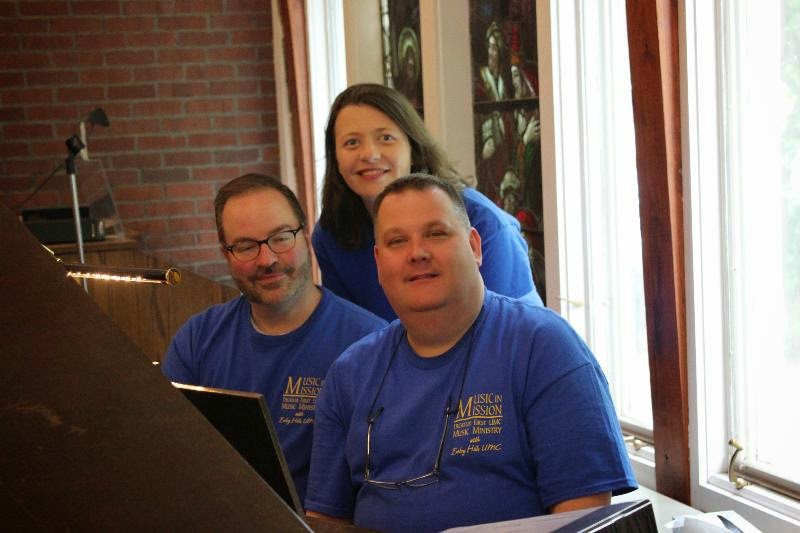 Seriously, this was possibly the best concert I've ever had with a youth choir.  Engaged, first rate singing.  Animated participation by all, including some smiles from people I'd decided didn't know how to smile.  All around.  Right before we sang I reminded the choir that this is the last concert we will ever sing together (next time we sing some of these singers will be missing and others will be added...cue "The Circle of Life" from Lion King).  Great concert.  Super fun.  And then great visiting. 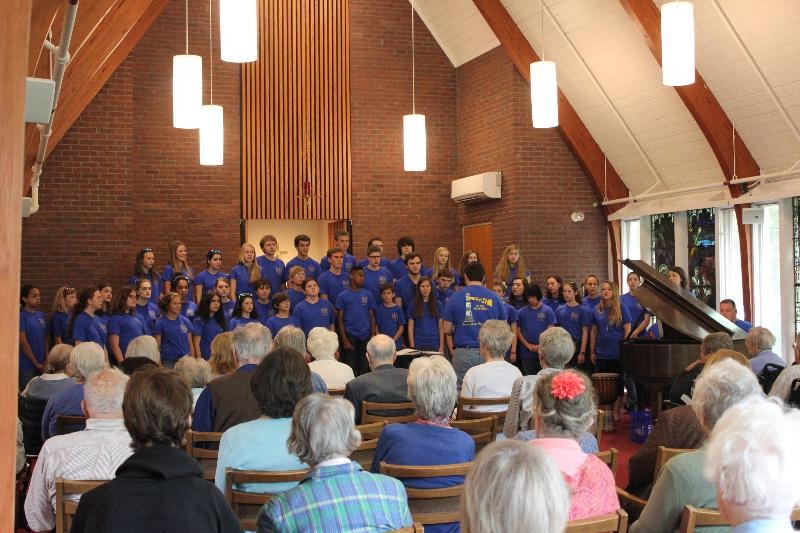 It was Don's birthday.  He was 93 yesterday.  So we took some time out of the concert to sing happy birthday to him. 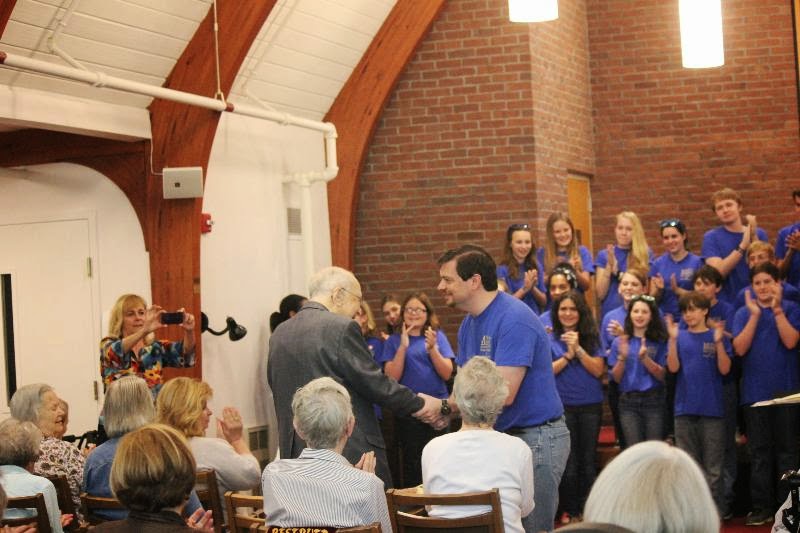 He was a Methodist Minister.  So naturally after we sang he took the opportunity to preach!  But he was preaching to the choir... 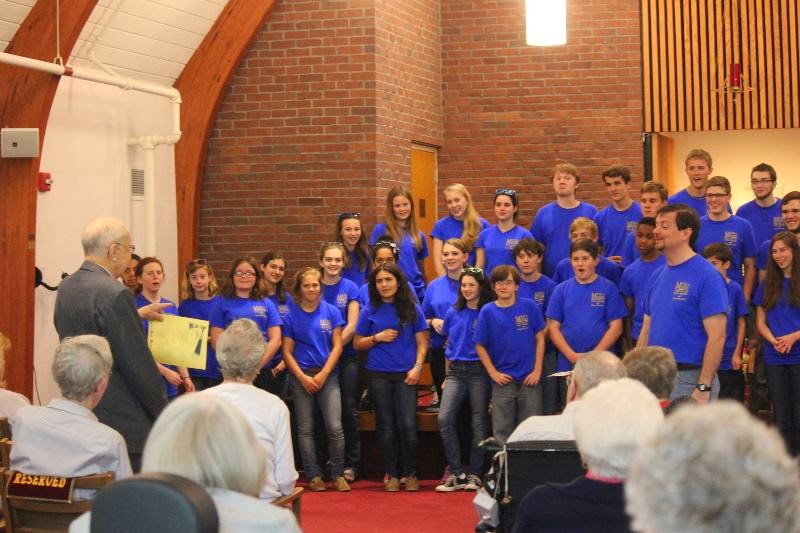 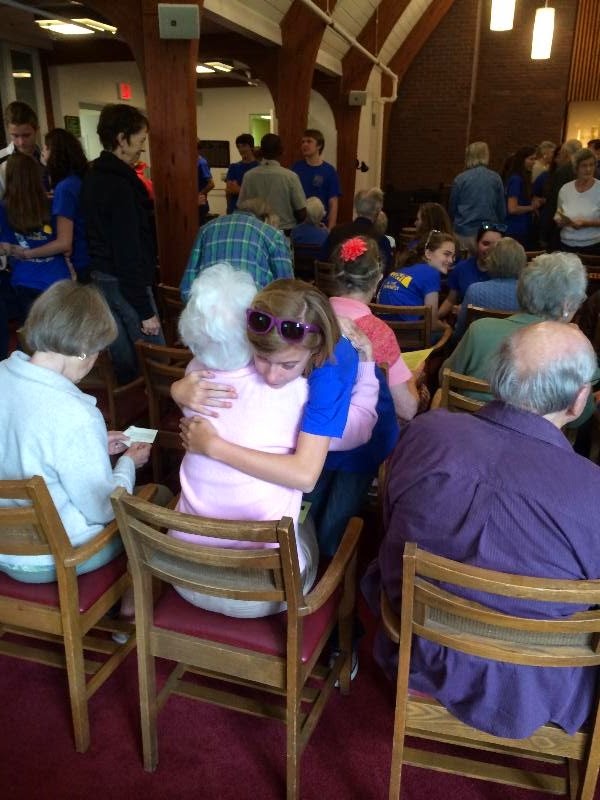 Beth and I had to drag them away! 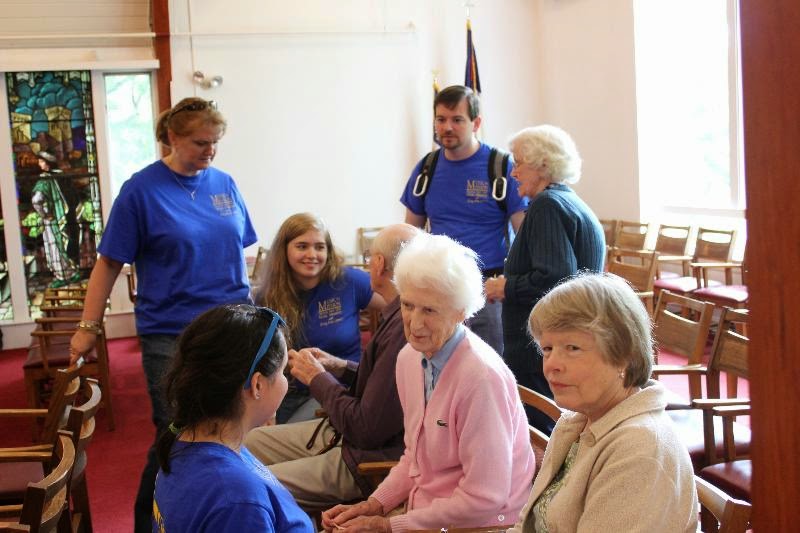 You can almost hear the spurs and see the six-shooters... 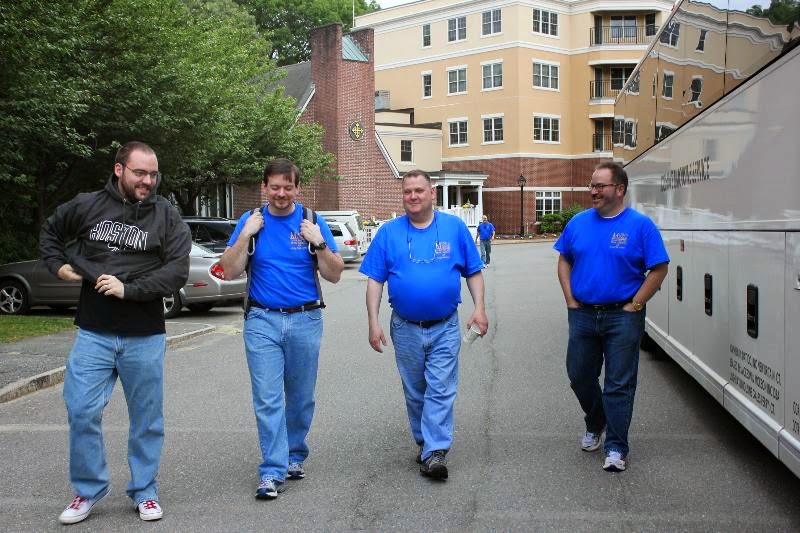 Things began to improve yesterday.  We received word our bus would be back at our hotel when we got back from the game.  We were not late anywhere we went.  The kids seem to have enough money to eat (they were overheard thinking through how many meals they have left to pay for to determine if they could buy souvenirs).  I wonder why... 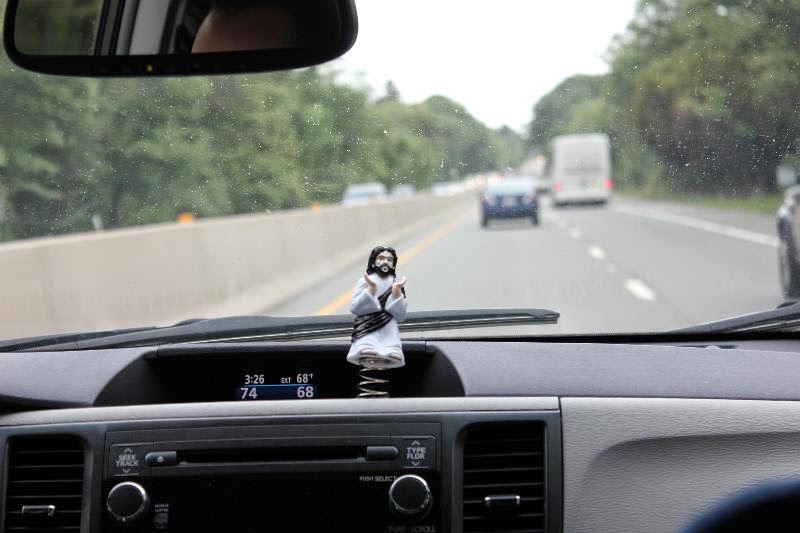 So then we went to Fenway.  After taking care of our extra tickets (thanks, Curt!), we met up with a couple of friends.  It was great to see Maggie Gleason and her husband, who moved to Boston in December or January.  Also, by chance, David Brewer was in town on business.  I think we all had a good time at the game.  We root root rooted for the home team (which won the game, leaving Henner deeply disappointed that there were no fireworks).  We enjoyed fried dough (please quit calling them funnel cakes...also, this is just what we need...more sugar!!!!!!!!!!!!!!).  And of course the ballpark hotdog, still the most compelling reason to go to a ballpark.  Except perhaps for watching William Morgan dance.  He tore it up.  Folks from all around us were cheering him.  I'm just pretty sure he's on youtube somewhere this morning.

Then we formed the orange and did the pizza man (kudos to Jonathan for coming up with "with these Red Socks in my hand...so I can be a Bostonian."

Jeremy Nix is jealous.  He has to be.  Paul found a place called the Bell-in-Hand Tavern.  It's apparently the oldest tavern.  They have great fish and chips.  And of course their logo is a handbell.  What's not to like? 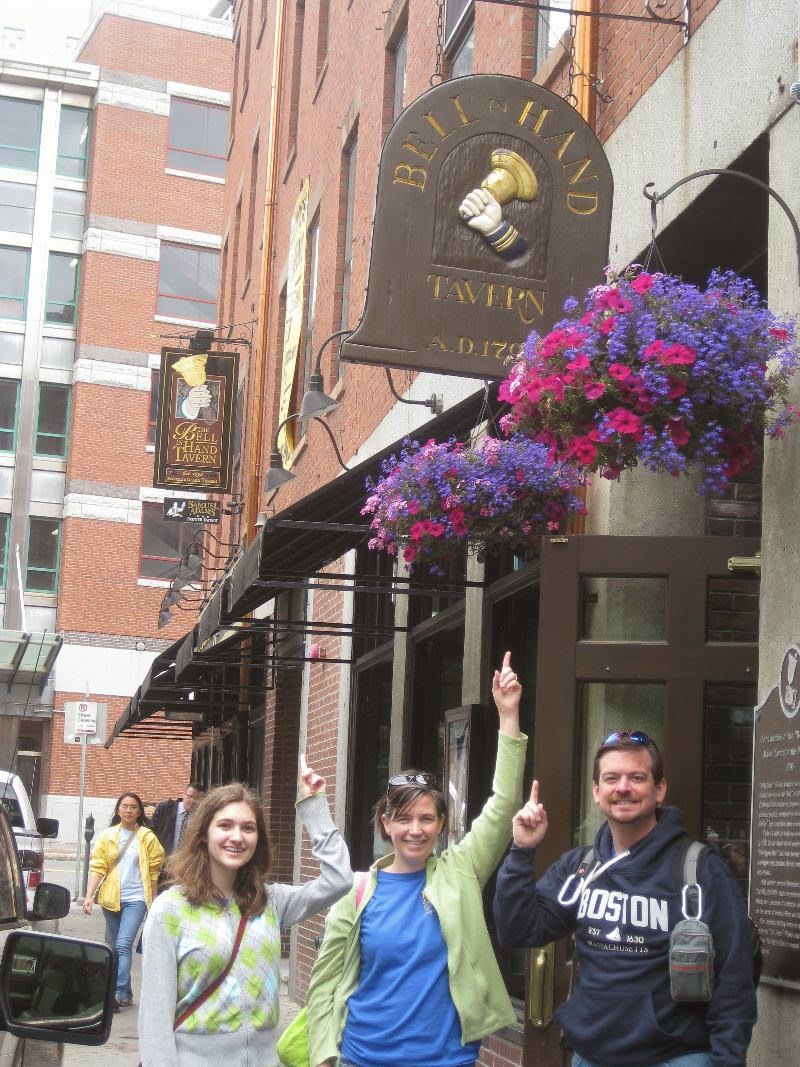 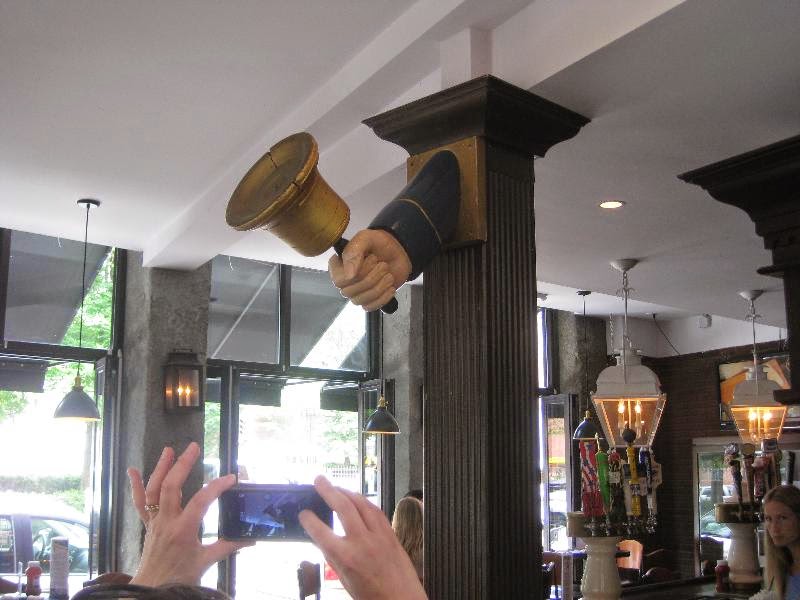 Mitch finally in his element on an organ bench in the chapel where we sang.  He told me all about what generation it is and how it compares to several other organs including his at home, the one in our chapel, and a few others.  Seriously this dude knows everything there is to know about the organ business. 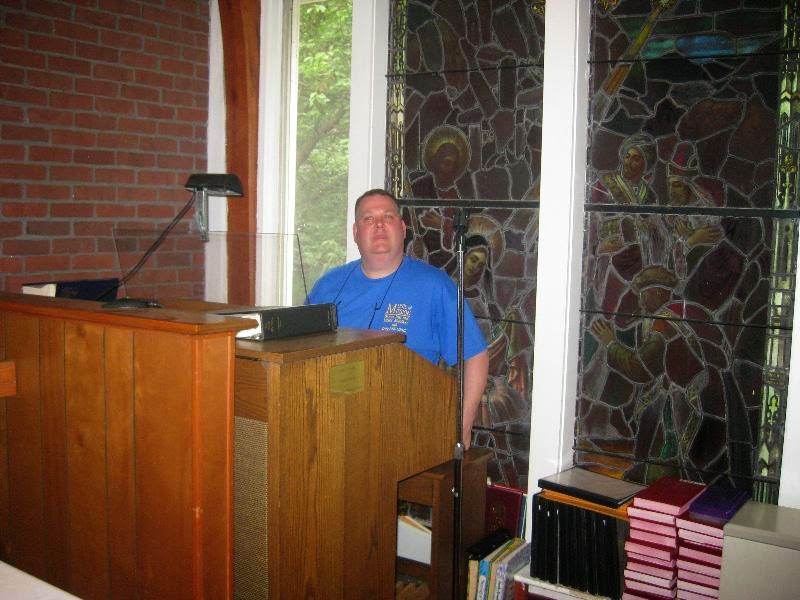 Finally today, a glance back to the harbor cruise, when Jonathan wanted to know why we didn't ride "Codzilla."  It's a jet boat.  Two words, Brown: vomit comet.  I'm not cleaning that up, and I'm not asking Carolyn to clean it up either (PS, thanks, Carolyn, for taking care of that the other day).  we went on the slower version with lower risk of revisiting anyone's lunch. 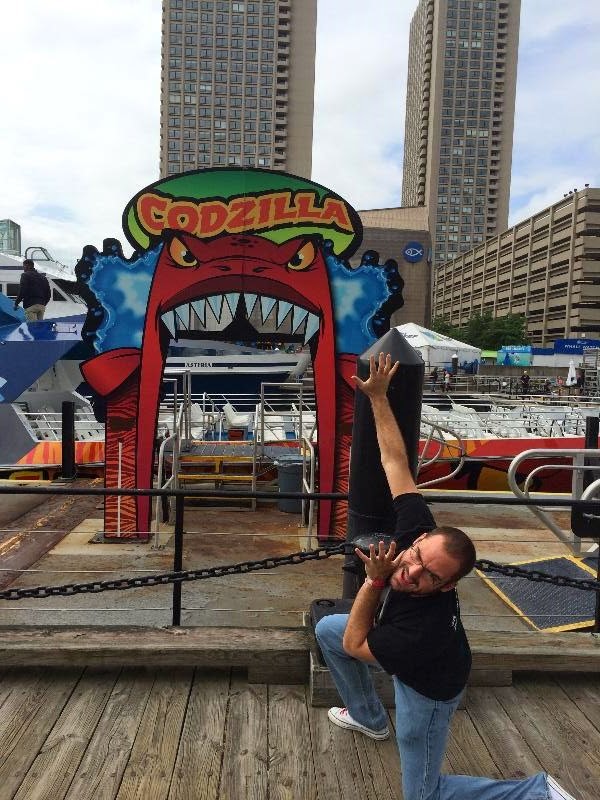 It was a great day.  Things are turned on their ear today because it's supposed to rain, which isn't good for walking a trail.  We're going to plan B, but perhaps that shouldn't surprise us.  Taking care of some things at the hotel this morning.  Then we'll have lunch at a mall.  Because as Curt said we haven't spent enough time shopping.  We're going to figure out how to catch some of the history after lunch...then senior night dinner.  And in the morning...many of our youth find out for the first time that the clock says "4" twice each day.

The official number is still 365, but when you add our flashmobs, I suspect we could increase the number.
Posted by John at 8:37 AM