Oh, er.  Sorry.   Excuse me.  Let's start with breakfast.  Listen here.  This is the reason we stay at Hampton.  Because breakfast is awesome, that's why. 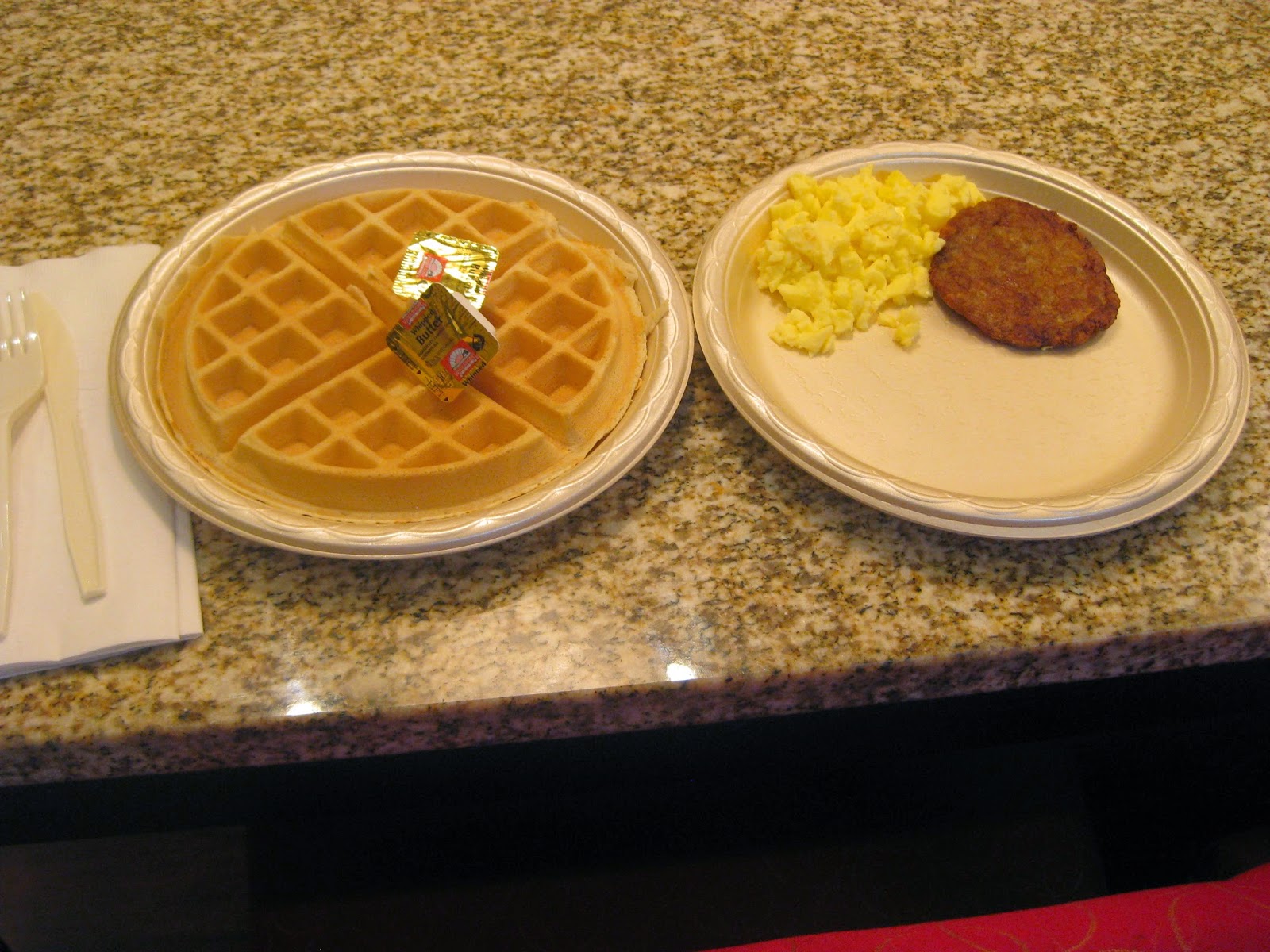 Great pic from the bus.  Wait.  Who is that guy in the back not wearing proper attire? 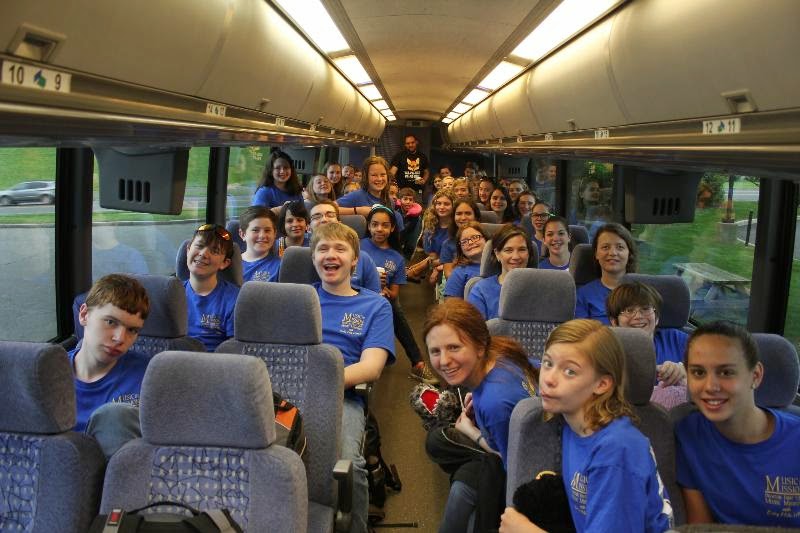 It was not a long drive to our first concert.  Also, just in case you're ever looking for Emeritus at Rocky Hill, I should warn you that there is another assisted living place right in front of it.  While they are very nice people, they won't necessarily let you sing if you show up unexpectedly.  But they will invite you to call ahead next time.  It wasn't that long a walk, though... 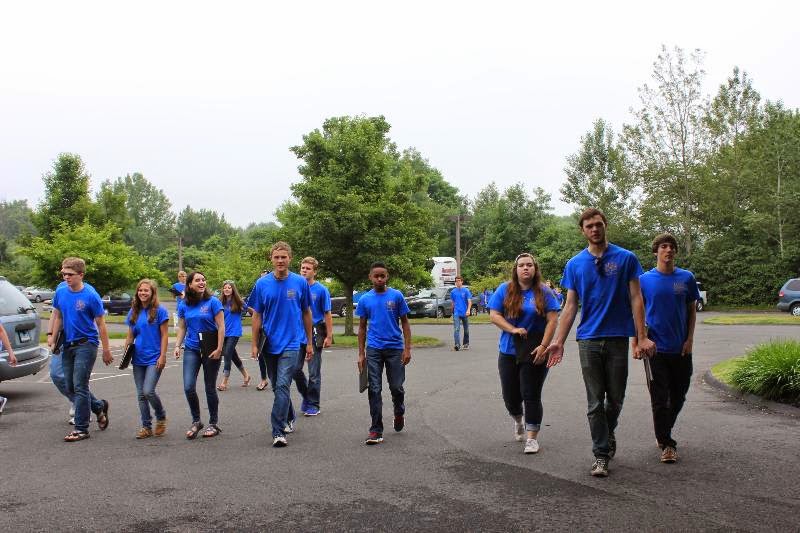 Couple of pictures of our chaperones in action here.  While we're getting ready to sing, singing, and in general being awesome, they're working the room, taking pictures, handing out programs, and...also being awesome.

Of course there are sometimes high level meetings and discussion.  Transcript of the conversation below:
"John: Excuse me, but what's going on out here?
Rhett: Well, Mitch's scared because his eyelids are jammed and his old man's here. We need a live... is it a live rooster?
Rhett: We need a live rooster to take the curse off the djembe and nobody seems to know what to get Millie or Jimmy for their wedding present.  We're dealing with a lot of stuff!
John: Okay, well, uh... candlesticks always make a nice gift, and uh, maybe you could find out where she's registered and maybe a place-setting or maybe a silverware pattern. Okay, let's get two! Go get 'em.

We did manage to get the curse of the djembe and had a great concert, complete with an opening act by Claire, who was apparently a youth minister in a former life.  She may or may not have implied that I will eventually work in an assisted living place.

As usual, we did a great job of visiting with folks, including Walter.  He'll be 102 in a couple of weeks.  Message from Carolyn for her husband: "I don't need an older man.  I've got you." 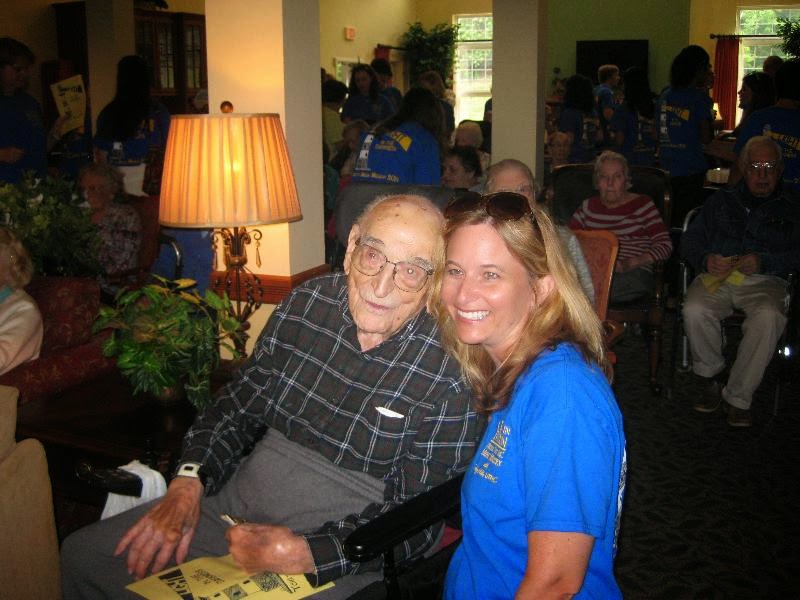 We also met Anna's aunt and grandparents.  They live up here in CT.  Also, because as we're discovering New England is a very small place, they will be at the same game we're catching in Fenway.

Next concert was at the McAuley.  They had a great room for us to sing in, and our best piano yet.

This guy here stood up right before our last song and asked to say something.  Danger Will Robins!  But what are you going to do?  So I told him he could.  He said, "On a scale of 1 to 10, do you know what I'd give you? [Choir says numbers between 8 and 12 but mostly 11] An 18!  I'd give you an 18!"  Thankfully he did not follow with a sermon, though all of us were wondering... 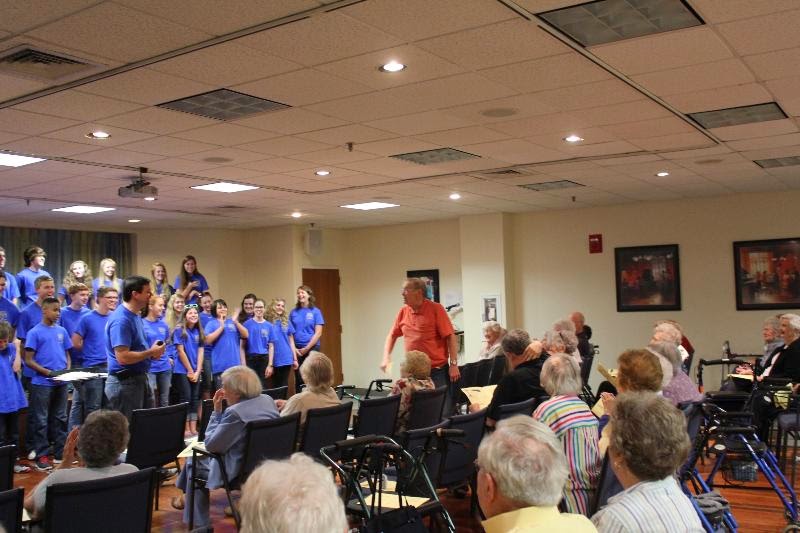 After the concert we stopped at the hotel to change before the Cliff Walk and dinner.

And also frolicked in the field.

Hey...I didn't know we were going to San Francisco!

Then we went to the cliff walk.  It's a walk.  On a cliff.  On one side is bay, and on the other is very impressive housing.

A few extra pictures from the Cliff Walk worth mentioning specifically.  First, Paul Petersen is from here, and so he was able to meet up with his family.  This is his niece.  Apparently he's as good an uncle as he is a chaperone!

And a good husband.  Aren't he and Cindy cute?!

Wow!  New England is really small.  We bumped into Andrew and Bennett's parents at the cliff walk too!  Seriously, we didn't plan that.  We just saw them.

Here's one to get some rumors started!  Their outfits coordinate and everything!

And this is from dinner after the cliff walk.  Kate and Anna will tell you that if you're with the director, you're never late.  As long as you beat him back to the bus.  But let's be honest, Anna.  It wasn't a fair race.  I was wearing my backpack.  I'll win the next race.

Paul sent me this picture.  It's his dinner.  I'm not sure why he sent this except maybe to say how yummy it is or how nice to be home or he thought a fly was doing the back stroke in his soup or something.  It was actually Littlenecks, which is clams.  Wish I'd have been able to try them...will have to settle for the picture.  He didn't bring me leftovers. 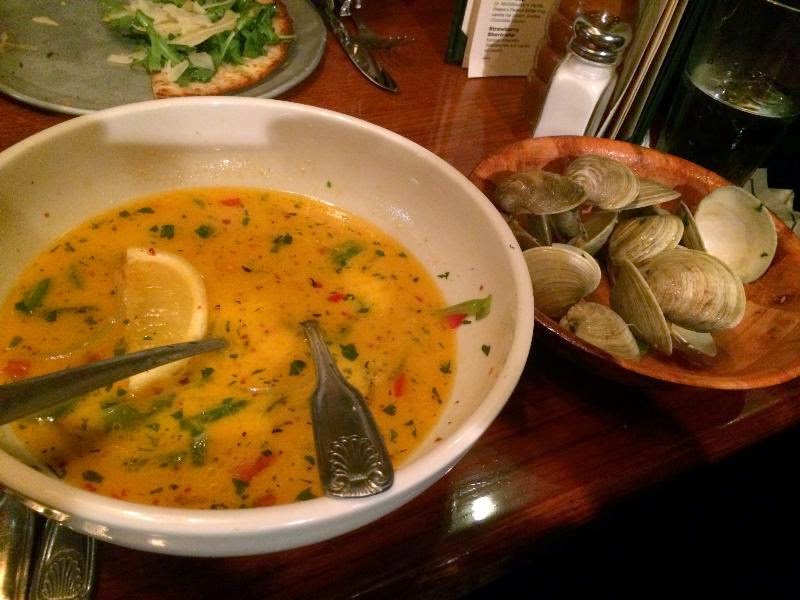 And winding up Tuesday's epic post with a representative pic taken on the cliff walk.  Jonathan has commented that the prevailing dynamic in this choir happiness.  It's a happy group.  They have fun together.  They love each other.  You can have great food.  You can have great views.  You can sing well.  You can talk with people when you sing.  At the end of the day, it's all for naught if you don't have love.  And this group has it.

And thus far, there have been 179 people who have benefited.
Posted by John at 9:01 AM