So..........when they finally decided our bus needed to be fixed, they sent us a different bus and driver so Wesley could take our bus to have it fixed.  As I was walking up to the bus, I thought, "wow...a limo.  Nice of them to step us up."

For the record: when it says "Limo," that doesn't necessarily mean what you might think.  This bus is older, and the a/c, while highly functional, is limited to "on" or "off."  But it's running.  It's getting us to where we need to go.  In case you're wondering, I've decided the callsign for the new bus will be "Cassidy 2." 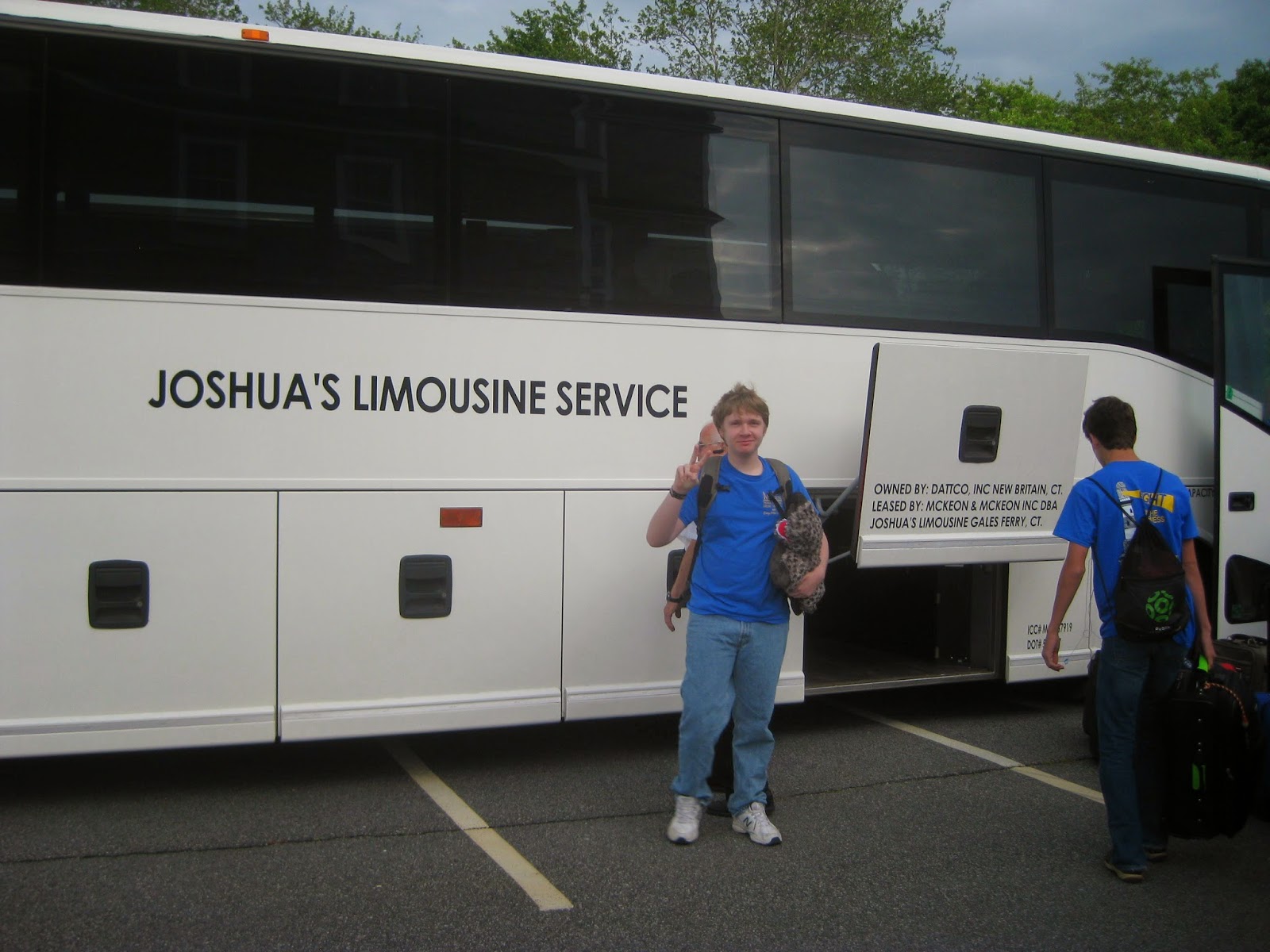 Our first destination on Cassidy 2 was the Beavertail Lighthouse.  It's on the island where Paul grew up (and by the way, while we were having the tour de Paul, we did see a place where he had a car accident.  He made it clear, though, that he's only had one.  Dig back in the archives if you want to see some posting about why the youth think I'm a terrible driver.

But I digress.  We went to the Beavertail Lighthouse.  We had a devotional on the rocks, where I talked about the lighthouse as a warning and navigational aid.  After that I asked them to take a few minutes to ponder, saying the only requirement was that they not talk.  That went well.  Kim also took some good pictures of some individuals.  I really like this picture of Andrew.

And we got to see the Petersens again...Paul's mom, sister, and nieces.  These are the other two, actually, so over 2 days we met all 3 of them.

Then we took a group photo.  This here is a great group of kids and adults.  I'm very proud of them.  Also remember that Kim is behind the camera...it's her first tour, but she's also proved an invaluable part of the group.  Her superhero name is "Flash." 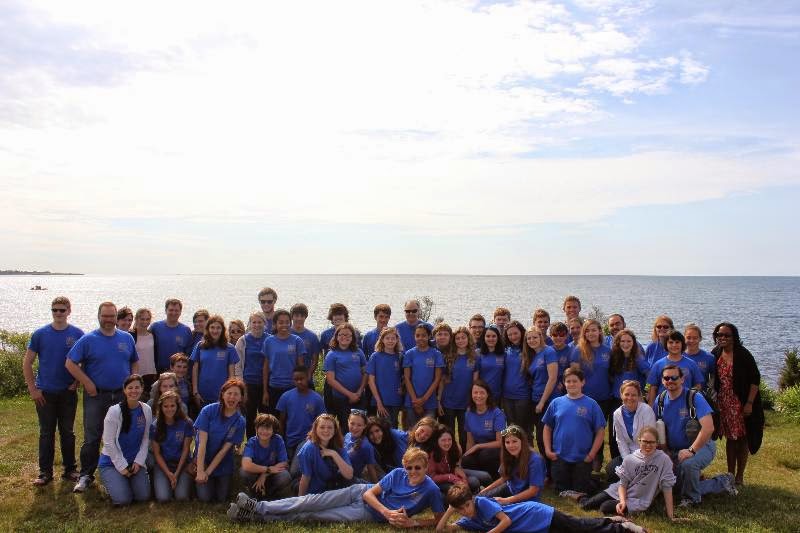 This is the side of Curt we see most often.

Our first concert of the day was at 40 Irving Avenue.  For the record, there are 2 40 Irving Avenues.  One of them is in Providence, and the other is in East Providence.  We wanted the one in East Providence.  Guess where we went first.  But we did make it to our venue, and they were waiting.  I told a couple of jokes while the youth came in.  If this music director gig doesn't work out, I could do really well on the assisted living comedy circuit. A couple of notables below.  One, I don't know what Mitch is up to, but with that smirk, I know it can't be good.  Two, I wanted to include photographic evidence that Jerry can in fact smile during a concert.  We were beginning to wonder.

After lunch at a mall (where I had Taco Bell and discovered the sauce packets are creepy because they have messages for you), we went to our next venue.  It was another Emeritus property.

Venue was a little tight, but not too bad.  Great crowd.  Also we got to take our new keyboard for a spin.  It's an awesome piece of equipment.

The chaperones have taken to "dancing."  At least that's what they call it.  I'm not sure that's what it really is...  Whatever it is, it looks serious.  And I never see it because I'm looking at the choir.

This is Irene.  She talked with Kate and Emily.  Later I saw her outside.  While we were talking she was looking at the youth and said, "Now where are my twin girls?  They came and talked to me.  So nice."  Remember that in a few minutes when you read about devotional.

It's awesome to watch the youth connect with the audience.  Coolest part.

2nd coolest part: watching the youth forge relationships with each other.

Coolest story of the day.  When we started walking out, Madeline talked to a resident sitting out front about the concert.  He said he was very bummed he had missed it.  She then organized an impromptu concert for him.  They sang Halle Halle Halle for him.  That's the kind of youth we have here. 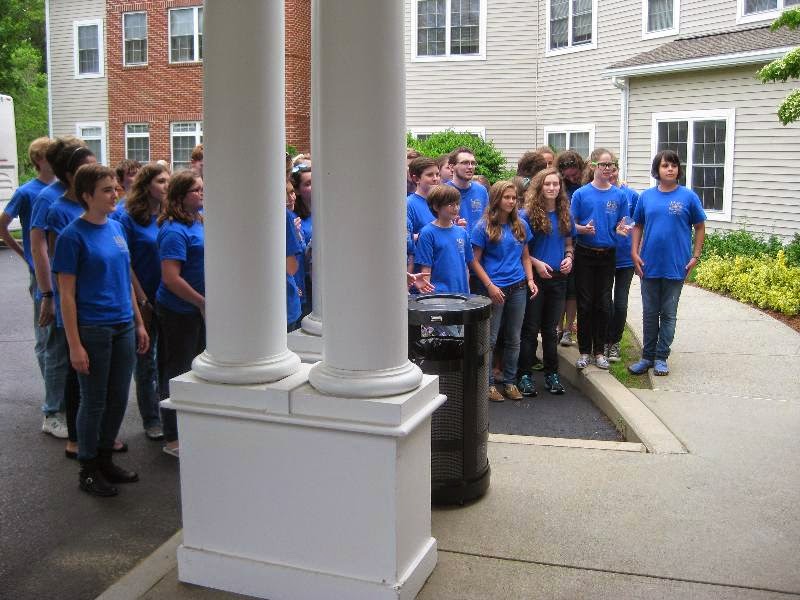 Let me just say this.  We have the best chaperones ever.  Here we are at the Quincy Market, first looking for dinner and then waiting for it.  Mitch and Rhett decided to eat elsewhere.  Not pictured in the restaurant: us trying to plug in all our phones in 1 wall outlet because they were all dying.

The kids had fun too.  But not as much fun as us.

Devotional!  We finally had one in the hotel.  We just talked about the things from the trip so far that have gone well or moved us.  Remember Irene (the one who asked about her twin girls)?  "Her twin girls" shared about her during the devotional.  Great connections.

The activity director at the second concert wanted to take a picture of us in front of our bus, so we lined up.  I grabbed a camera to take one for us as well.  Andrew on the ground in front again.  He says that's his trademark.  Not sure I fully understand.  But it's a good place to end this post. 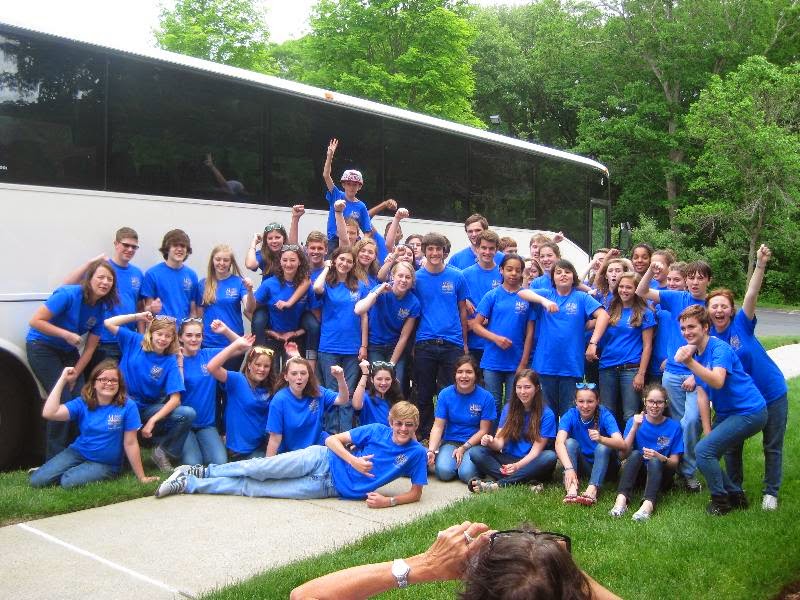