All About Day 1: Sunday

Before we do anything else.  Before the first youth steps on the bus.  Before we even finish singing in church.  We need to make sure we have Dashboard Jesus in his proper place.  Failure in this area will without question lead to unmitigated disaster.  Fortunately Curt brought DBJ along.  You'll see later that Curt and Jesus seem to have a very special relationship. 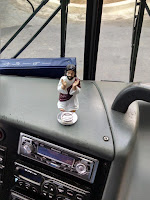 As usual, we begin with a few nice pictures of various choir members as we're leaving.  They're usually alert and awake in the beginning...before they are broken.  I have to say this year there were more sleeping right out of the gate than I'd consider normal.  Still, basically happy, rested, fresh, radiant, and sincere...

And then things got strange...

I'm not sure what Curt is thinking about here, and I'm pretty sure I don't want to know. 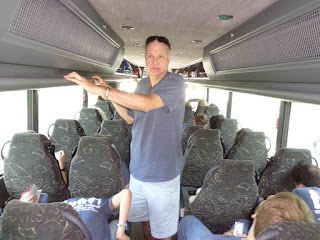 Ditto Emma here.  It's only Sunday...the shirts shouldn't smell that bad yet. 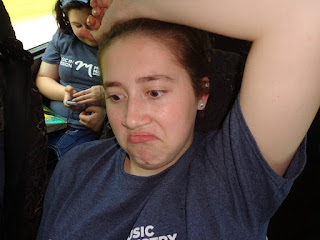 And then a hero comes along... 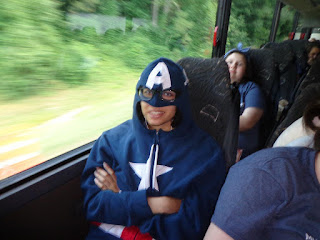 The first thing you'll notice about this nice picture of our first concert is that there is no choir.  That's because they're all on the elevators.  When we arrived (unsurprisingly a little late) they were gathered for a worship service in the place we were going to be singing.  As it turns out, they had adjusted the schedule earlier, when I told them that I wasn't certain we'd make it by 3, so we arrived when they were expecting us.  I wonder if they had read a previous blog... 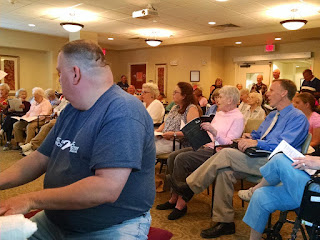 The rest of the choir did eventually arrive, and we sang the concert.  It went well as first concerts go.  Actually very well.  The choir has a big sound, and they sing really well when they are on their game. 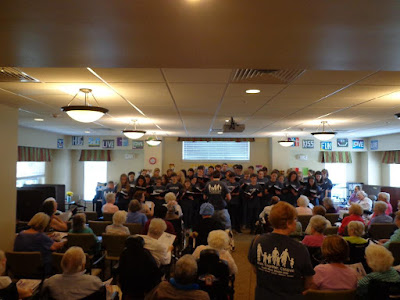 Those of you who have "traveled with us" before will know the really important stuff happens after the concert is over when we start meeting our audience.  I noticed this year you can really tell the difference between kids who have been doing this a while and kids who are along for the first time.  Those who are more practiced tend to engage on a deeper level.  This is how it has always been, though, and by the end of the week most of the younger ones will be more comfortable talking and listening. 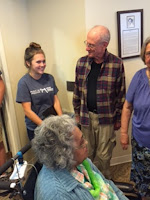 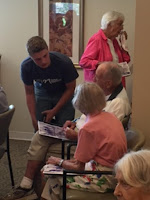 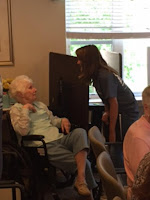 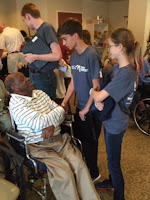 And then something happened that hasn't happened to us before.  One of the folks said, "John, they are waiting for you on the 4th floor in the memory unit."  This place had the primary concert in the rehab facility, and then they wanted a group to move downstairs and sing some more.  So I took a group of about 12 or so folks, and we went down there to sing while the remaining youth stayed to visit.  These are the ones I picked.  Uhmmmmmm....Bennett, if you're reading this, can you please explain what's going on in this picture?  And of course Jerry again with the million dollar smile.  Seriously.  Best smile ever. 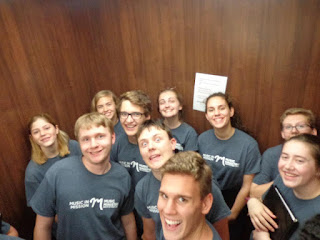 The concert was mostly the same as upstairs, only we didn't do all the pieces, and we did everything we sang from memory.  Except for Jerry, who claims to have been reading my score--in the floor--upside down.

One of the unknowns of singing in these places is the instrument we'll be using.  We carry a keyboard with us, but most of the time the facilities have some kind of a piano.  The piano upstairs really sounded pretty good.  It's just that Mitch was facing the wall and seated behind the choir, so we kindof had to play it by ear [Editor's note: we apologize for the blatant dad joke].  The keyboard in the memory unit is quite a different story.  We tried to move it, and the stand self-destructed.  I fixed it, and the damper pedal plug broke off.  Broke.  Right.  Off.  My forensic investigation told me it had already been broken, but in any event when we plugged it in it was like it was always pushed down.  So for Mitch to use the pedal, his only option was going to be to plug and unplug it while playing.  I'm confident he would have been capable of that.  The keyboard wasn't loud enough that it caused too much issue, though, and the youth sang really well.  So it was good.

Also always good to see family and friends at the concert!  Here we got to meet Owen's grandparents! 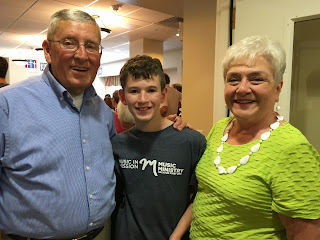 And then on the road again...

After the concert we headed toward our hotel in Knoxville.  We had planned to check in to the hotel first then head into town for dinner, but Michele and I noticed there are a lot of restaurant choices right around our hotel.  So we decided to eat right here at the exit.

This was another thing that I did new this year.  We played the roommate game (which this year consisted of each youth being given a food item and each chaperone then ordering a meal which was filled by those items).  Then, and this is the good part, the roommates all went to dinner with their chaperones.  This went really well.  The youth valued getting to know the adults, and some of them took advantage of the opportunity to consider some ground rules for their rooms.

After dinner we checked in to the hotel (right on time, thank you very much).  Then we had our devotional time.  We did this in the eating area of the hotel (which is usually available at night).  There's something inspirational about the 12-hour-old smell of Hampton Inn waffles.  I'm not sure what that is. 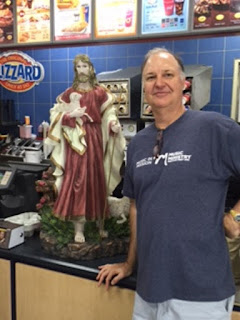 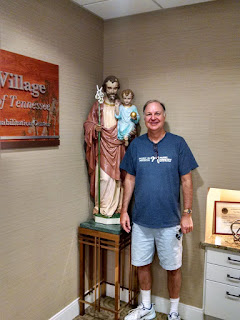 What I mean is, Curt kept on finding Jesus, leaving us to wonder if he ever actually found Jesus.  It's so confusing.

We sang the first verse of The Summons together.

We considered how we follow God's call on our lives (even if we don't agree on or understand completely what that means).  What does it mean to let the love of Christ be shown and let his name be known (importantly, how is the passive statement change how we act on it...which I think adds a considerable amount of humility to how we go about this mission work).

Which has me wondering now.  Mission is a loaded word, isn't it?  It conjures images of walking in a dessert of people trying to spread some kind of good news for their own good.  I'm not sure that's really what Jesus wants us to do, and I'm not sure that's what the word mission really needs to mean.  Maybe it means just letting God's love be shown by who and how we are.