All About Day 2: Monday

I ended the last long post by documenting Curt's ongoing search for Jesus.  He wasn't satisfied to find Jesus at Dairy Queen or Alexian Village.  He's still searching, longing to feel the Wesleyan warmth in his heart.  So just know that all day, every day, Curt has his eyes open.

We nearly always stay at Hampton Inn.  Breakfast is a big part of the reason why.  It's included.  And it's not bad.  Sometimes it's amusing to see what kind of madness the youth get into.  I don' think you can see it because of the cup, but in the picture below Coco's plate has a waffle, covered with whipped cream, and topped with a blueberry muffin turned upside down.  I'm not sure what she's calling it... 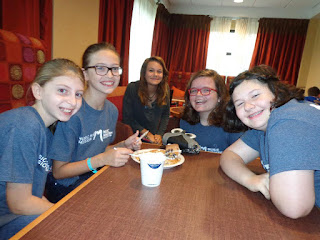 Back in May, Jason Clay challenged us to be "day-makers."  I was thinking about that when the person who was working the breakfast bar asked who we were and what we were doing.  When I told her we were a choir, she said she wished she could hear us.  So I hopped on the bus and said, "Hey, do you guys want to make someone's day?"  They did.  So we went back into the lobby and sang a song for her (and a bunch of other folks who happened to be around at the time). 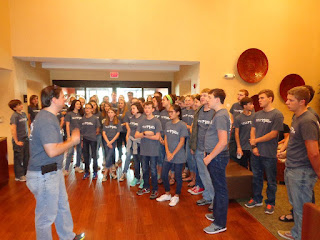 We went to Elmcroft of West Knoxville, where we were in fact on time, and by on time I mean 30 minutes early which, believe it or not, is when I try to arrive at these places.  It gave us time to have a warmup on the bus and then spend a bit of time singing in the space inside.  It was a large lobby with a fountain with two long hallways off the lobby...which means people heard us who we didn't even see.  Here we are before we sang... 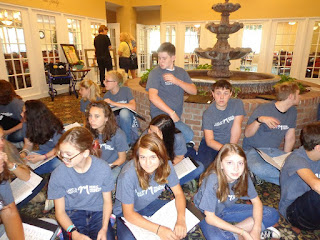 I'm not sure what Hudson is doing in that picture.  Caption contest.  Go. 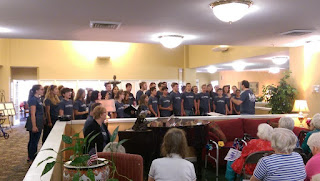 We have a number of soloists in our concert this year.  Above right, Hanna is singing hers (the third verse of "Walkin' Down that Glory Road").  This group both looks and sounds impressive when we sing, and people nearly always comment on that.  But they are almost always more impressed by what we do next.  It's the visiting that sets us apart from most groups--the intentional time to be present with them--to walk together with them, even if it's just for a little while.

Way back in October, Kara T made rainbow loom hearts for all the kids in our congregation as part of our future story presentation.  It was an example of using her gifts to make the world better.  She agreed to make more of them and bracelets for us to hand out while on tour.  I took a picture of a couple of them (although it's hard to tell the one on the left is a bracelet because I didn't do a good job of taking the picture).  This is who we are: using our gifts to build relationships with God, our world, and each other. 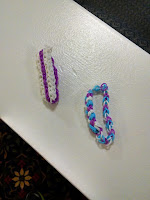 I had understood Arby's would be an option at our lunch stop.  It was not, and Amanda was crushed.  Crushed.  Even the fact that it was free pie day at Perkins didn't make her feel better (most likely because she was among those who chose instead to eat at Hardee's, having been wholly unaware of the possibility of pie).

But never fear.  At a rest stop along the way, deliverance.  The clouds opened.  The rays of light came down.  The angels sang.  Amanda had her Arby's sauce.  Then things just got crazy when she opened an Arby's Sauce and a Horsey Sauce--and consumed them simultaneously.  She indicates this combination has real possibilities.  I have my doubts. 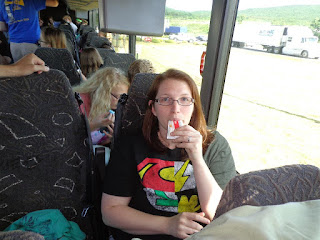 Meanwhile, our entertainment for most of the day consisted of a Rocky marathon.  We watched I, II, and III.  We'll get IV in today.  We won't be watching V.  You know, these movies really are better than you remember.  Except for Stallone's acting in the later movies.  That's just as bad as you remember.  And what's that on the TV below?  In the hallway outside of Adrian's hospital room on Rocky II?  Curt has found Jesus (again)! 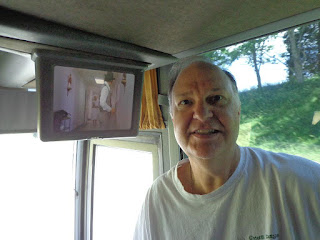 The entire music staff of DFUMC is on this tour.  Yesterday morning it was announced that Mitch has accepted a Director of Music position at a new church.  It has long been his dream to be the Director of Music at his own church.  We discovered that we would be passing very near his new church, and the youth asked if we could stop and check it out.  So we did.  We sang a few songs on the steps of the Sanctuary... 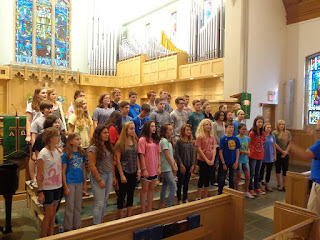 ...to an audience of our chaperones and couple of folks from the church who happened to be there.

Mitch played a song on the organ for us (although he committed a mortal sin by playing in bare feet).  After that he talked to the youth about the organ, explaining some of the differences between this one and the one at DFUMC and showing them something of how it works. 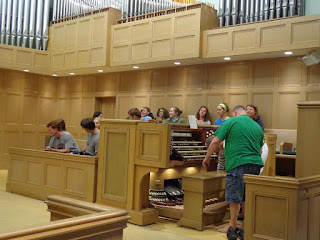 This was a profound experience for him and for all of us.  The youth love Mitch, and he loves them.  Like all of us, they want only the best for him, and they were genuinely excited to see what an amazing step this will be for him.

We're going to miss Mitch.  I'd like to believe he's going to miss us too.  Tait took a picture of him playing the piano, and it occurs to me that when he moves to his new position, this is the instrument (this and the organ of course) on which he'll be working his magic, making incredible music and creating the opportunity for inspiring worship.  I'm not sure I can fully explain fully how seeing him in his new space helps me cope with the idea that before too long we won't be working together.  Maybe it's knowing where he is, not having to imagine his new place but being able to see him there in my mind.  Maybe it's because the youths' joy is contagious. 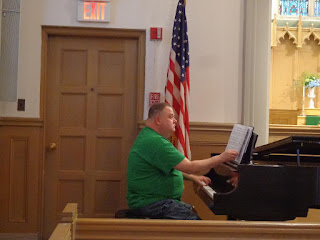 The extra stop led us to change our plans, eating at a different place and also delaying our arrival.
But at least when I got to my room, I had assurance that it was cleaned just for me.  Methinks they doth protest too much. 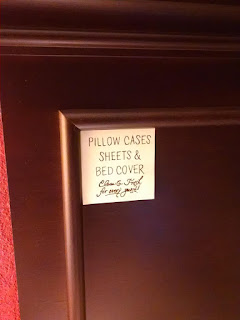 We did our devotional on the bus. We shared stories and then sang the second verse of The Summons:

Will you leave yourself behind if I but call your name?
Will you care for cruel and kind and never be the same?
Will you risk the hostile stare should your life attract or scare?
Will you let me answer prayer in you and you in me?

That first line has troubled me.  What does it mean to leave yourself behind?  God doesn't ask us to be other than who we were created to be.  So it doesn't mean denying who we are.  Rather, I think it means having the courage to place the needs of others ahead of our own.  We are to care for everyone, cruel and kind alike.  We are to have courage to offer that care even if it is unpopular or draws judgment on us.  We face the world with Divine Courage and attempt to be God's hands and feet in it.

It's a step beyond making someone's day.  What if a resident at Elmcroft, that very morning, had prayed for a break from loneliness or to see a friendly face?  Had we answered a prayer that morning?

Or in other words...