Day 4: Wednesday. All the details.

Right out of the gate...

We tried a new strategy for concerts this year, and it seems to be paying off.  Generally speaking we're doing concerts at 10:00am.  This has meant we have been able to leave the hotel at 9:00am most days, yielding more sleep for most of the choir.

It also means that our first thing on many days is a concert, which is less good if you don't do a warmup.  But it can happen.  So here is our first concert.  The venue is the oldest Methodist "home for the aged."  You can tell it's old because of the name!  The outside of the building is beautiful, though you'll have to take my word for that.

Another new thing for this venue: my contact there asked me if the youth would mind helping to bring down the residents.  It was touching to see them pushing the residents into the room prior to the concert. 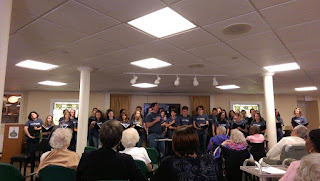 And of course continuing to let the love of Christ be shown...

Those readers who have followed before may remember a story about the Washington Monument.  It was a harrowing and amazing tale of intrigue and heroism.  If you want to reminisce, you can find that story here.  Well it turns out Independence Hall works much the same way, and we needed tickets.  However, there were a couple of key differences.  First, if they had a letter on church letterhead, one person was allowed to get all the tickets for us, meaning we didn't have to dispatch a group of nine.  Second, and really more importantly, the required arrival time to secure tickets was not 6:00am.  So when the bus got us to our venue, Tait and Chris Ubered their way down to the hall to get our tickets and were waiting for us when we got there.  Thanks, guys!

A couple of fun pictures of walking...

Here it is.  Independence Hall.  This is where it all began. 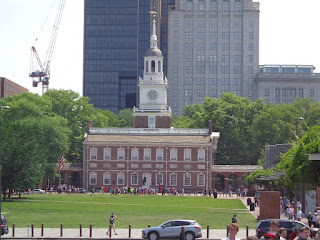 The tour includes two main rooms: a courtroom and the signing room.  There is a third room, the first you go into, where a ranger orients you to the history involved.  Our ranger actually reminded me a lot of Cliff Claven.  I mean, his voice wasn't right at all, but he was very clearly proud of his uniform and also the amount of general knowledge he has in his head (which he assumed most of us did not...and in absolute fairness to him he's probably right a good bit of the time).  That said, I think he needs to brush up on his knowledge of open container laws in Louisiana.  Look, man, it's not open as long as the straw is taped to the cup.

In any event, the rooms were very cool.  The signing room is much smaller than I had imagined.  Much smaller than it looks even in the picture below.  Most of the furniture inside is period furniture, but the presider's chair in the front is original.  That chair was in the room when the documents were signed.  George Washington sat in that chair.  Imagining the history swirling around it is mind blowing.

We ate lunch at a food court nearby rather than going to the Reading Market.  While walking around, a couple of folks found interesting things.  First, Amanda noted the US Mint and wondered if we could get some more Cowden Bucks printed. 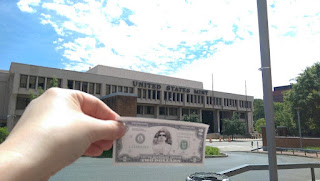 And then there's this, some kind of shrine to Rocky that Michele found.  Actually they just want you to know they have a lot of Rocky merchandise for sale.  Merchandising, where the real money from the movie is made.  I was actually surprised how prevalent the Rocky stuff is up here 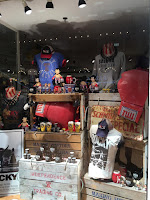 2nd Concert in a Day

We're here to sing, right?  So we did our second concert after Independence Hall.  It was on the 4th floor.  That's been a common thing this year: concerts on upper floors (or lower...like at our first concert when we walked in on ground level and they said, "You need to go down to the 6th floor...you're on the seventh.")  Anyway, the bus had to circle a bit because of some construction, so Curt and I warmed up the crowd while Mitch played light background music...several of them are now prepared to vote for Curt for president based solely on his indication that he is running as an independent.

We did most of the concert from memory, opening the books only for "Just a Closer Walk."  Also I had left my book on the bus, so I wasn't quite as much help to them as I might have been.  Nevertheless, it was a good concert.

Of course we did that thing we do, which I keep telling the youth is what sets us apart from a lot of other folks who play in the same kinds of venues.  And I'll tell you, I think the after-concert chatting is as enjoyable for the youth as anything else.  They really are good at it.  I'm usually working logistics, but this time I even got to visit some!

This is another venue that made use of the posters announcing our concert.  Cool pic of the poster with the choir in the background. 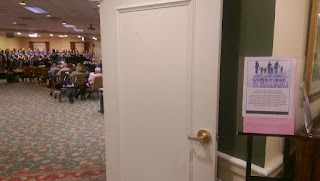 To maximize your experience of the next section, click here and wait for the music to start playing.  Then continue.

Next we went to the Rocky steps.  When I get home and can edit the video, I'll put up a video of the entire choir running up the steps together.  Gonna Fly indeed.  We got to the top and did the Rocky sign (as opposed to the Hail Hydra sign...they look similar to the untrained eye).

It was actually really cool to run up the steps together.  I can't really explain why.  Kindof like when we sing together...

[Breaking News]
I'm working on the blog on the bus.  We had stopped to use the restrooms.  All were on the bus except for Tait.  He got back on the bus and said, "I was trying to get our last kid out of the bathroom, you know, banging on the door and stuff....it wasn't one of our kids."  We're currently making our best possible speed away from the Wawa station and praying the state patrol is not in pursuit.  We now return you to your regular blog post.
[/Breaking News]

Actually several of the more energetic folks ran the steps multiple times.  I raced a few of them up myself, and I was pleasantly surprised by my showing.  The rowing is paying off.

I knew from a FB post by Marilyn White, I knew the Rocky statue had been moved from its original location, but I was still mighty disappointed by that.  Nevertheless, there is absolutely no way we would come to Philly and not have a picture with Rocky. 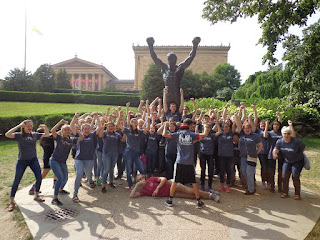 The girls have taken to braiding their hair, so they took this picture.  Mitch has dubbed them "The Braidy Bunch."  He's clearly well on his way to accepting the yoke of the Music Director, which includes as a central responsibility making terrible jokes. 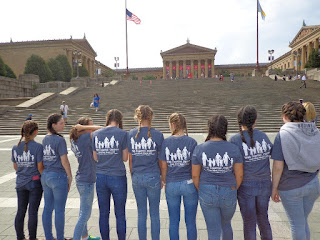 And once again, Curt found Jesus. 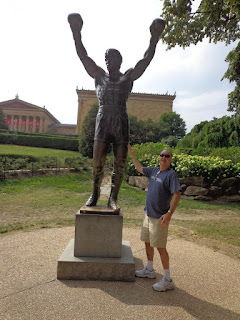 We went back to the hotel for a while, and I was actually able to visit with my family before midnight.  So that was awesome.  We had a little more than an hour to get ready before we left for senior dinner.  A bunch of the youth dressed up.  I've never said we should do that...it's just spreading.  Every year a few more folks are dressed nicely for the dinner.  I guess next year I'll have to dress up.

We ate at an Italian place, and I knew it was going to be good when we walked in and the server said, "I'm gonna let yous get situated and then take your order."  Authentic Philly right there.

Yet another new thing I tried this year: youth planning.  I picked the destination.  Virginia and I worked together on the route.  Then I set up hotels and venues.  She then planned all of the fun stuff.  Picked out where we'd go and when, looked up information and sent it to me so I could make the phone calls and set up payment.  She did a lot of work, and I appreciate it.  So before I got to senior gifts, I gave her an Italian Stallion tshirt.  Great job, Virginia! 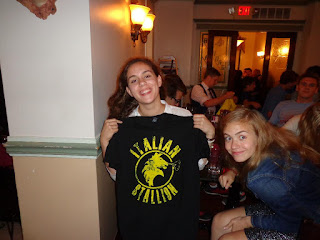 And then, the seniors.  This is a great group of folks, and I'm going to miss them.  We graduate five this year.  As I told the youth, our graduates leave a big hole, and while next year others will rise as leaders within the group, they will never be replaced, and we will never be the same choir.  Remarkably I made it through the whole event without crying.

The restaurant made us a cake for dessert, on which they wrote "Farewell Seniors."  That was pretty cool...might have to figure out how to make that a regular thing in the future. 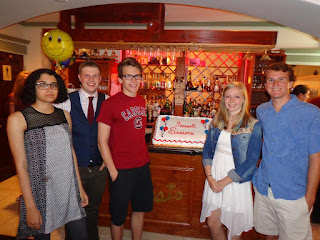 These guys take a little piece of me with them when they go.  If nothing else, I hope they remember one thing: