It's now Monday morning.  Yesterday was another great day, even if a big chunk of it was spent in the van headed home (during which, according to the kids in my van, we actually experienced time travel when we went "back to the future" as I reset the van clock).  This was extra amusing because the kids never saw me set the clock; they just saw it was different and wondered what kind of witchcraft that might be.  Wait a minute...my cell phone magically changes...

We got an earlier start on Sunday, aiming to leave the hotel by 7:30 to get to our first church, which was in Nashville.  Thank goodness that breakfast was offered at 7:00, which gave me ample time to visit with my old friend the waffle station. 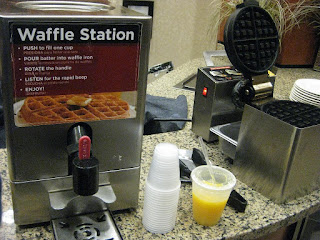 Don't judge me.  And besides, it seems I'm not the only one who enjoys waffles... 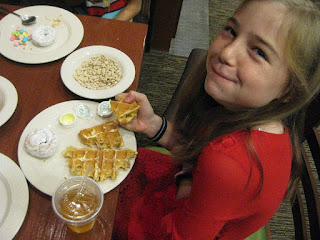 I did enjoy my waffle.  And eggs.  And hash browns.  And then I found Helen and Michele offering a clinic on what you should be eating for breakfast.  I felt a little bad that I had not made such healthy choices.  But the siren song of the wafflemaker...  I'm so conflicted. 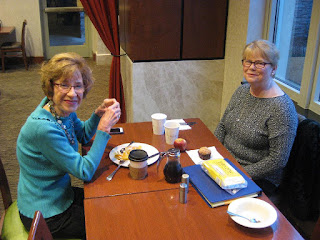 After breakfast...on to our first church service: West End UMC.

We arrived...close to on time at West End UMC.  It's a beautiful space, and it looked even better when the front was filled up with children ready to lead worship!  The kids here are a combination of children from Decatur First, West End, and Belmont UMCs. 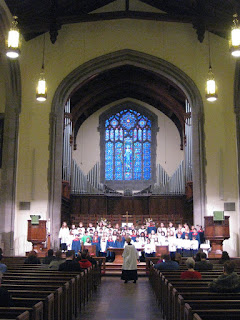 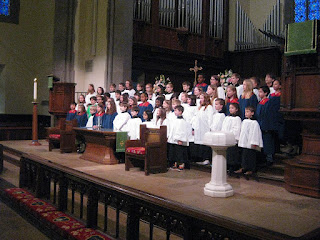 I took a picture of the  back gallery just because it was so darn impressive.

But this is why we were there today.  Here we are leading worship.  The kids sounded wonderful! 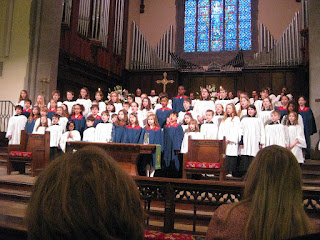 This first service was based on Jesus' healing of the woman with the hemorrhage, Jairus's daughter, and the gentile with the pigs.  The pastor pointed out that these represent essentially a string of interruptions and noted that when Jesus was interrupted by someone helpless to help themselves, he always chose to help them first.  When confronted with the helpless, "We know," he said, "what Jesus would do.  The question is: what will we do?" It felt absolutely right to recite the Affirmation of Faith from Canada after that, as it begins, "We are not alone."

We snuck out after the Affirmation of Faith to head to our second church for the day: Belmont UMC.

Again, a few picture of the space, which is lovely:

All the more lovely when filled with children! 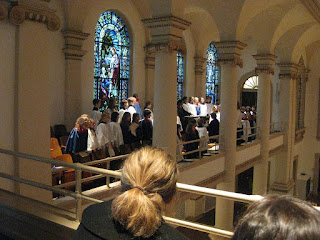 I enjoyed both services (and I kept the bulletins because they had some really good ideas that I'll probably steal!).  This service was based on the beatitudes, essentially claiming that the world described by the beatitudes will only come to exist if we accept our own role in making it happen--that it is simply not enough for us to recite them and say it sounds like appealing fiction.

We stayed for the whole of that service, and afterward got on the bus to head home.

We stopped for lunch, where I noted that several of our girls were wearing saddle oxfords (or, as I called them when I was little, avocados).  Ok, ok.  Cut me some slack.  I was really young, and all I knew was that I didn't like the shoes or green horrible tasting fruit.  I just called it all avocados.  They had these from our children's musical "Not Your Average Joe" back in November.  Here's a pair modeled in Wendy's: 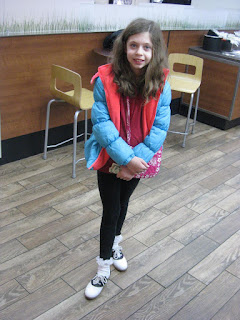 And that about brings it to a close.  We arrived back at the church around 6pm.

The experience was rewarding and invigorating.  It was fun, both for the kids and for the adults.  Well, maybe I shouldn't speak for them.  It was fun for me.  I'll leave you with a short clip of their singing in worship at Belmont UMC.