I was driving down the road the other day when I passed a new apartment complex with a large sign that said the apartments were now leasing.  The sign was flanked by what appeared to be balloons, but on closer inspection were more like rubber balls on a stick.  I had seen these before.  Not far from that apartment complex there was a car dealership that had decorated similarly, though the effect was somewhat diminished as some of the balls had deflated while still perched on top of the stick. 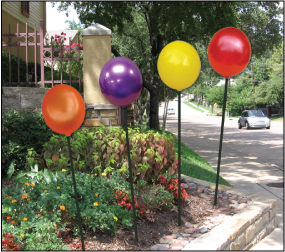 Like these, only more lame--if you can imagine that.

Globophobics aside (that's the fear of balloons), balloons usually indicate a celebration of some kind.  Birthdays.  Circuses.  Big sale events.  You use balloons when you want to draw attention to a special moment.

Part of balloons is that they typically don't last very long.  My kids pick up a balloon when we leave the Mexican restaurant, and by the next day the balloons are dragging the floor.  By the third day we euthanize the balloons and put them in the trash.  Pro Tip: when euthanizing a balloon, make sure you wake up before your children and bury them underneath other bits of trash.  The kids will never miss them...unless they discover a formerly inflated balloon carcass.  Mylar balloons (that's the shiny metallic ones) usually last longer, but over time they too begin to droop and sag, eventually joining their latex cousins in the great balloon beyond.

It's precisely because of their limited life spans that balloons call attention to a special moment.  When you see balloons floating in the air, you know they haven't been there very long.  Someone took the time to inflate them, tie them, and anchor them to that special chair for the birthday girl.  It's special, because like the balloons, the moment will soon pass.  Once it is gone, you'll never get it back (because even if you fish the balloon carcass out from under the banana peels, you'll never get it reinflated.  That's just not how balloons work). 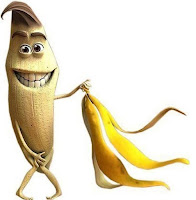 You can try, but you'll never be able to
un-see this picture.  You're welcome.

I don't hate many things, but I hate these fake balloons.  I mean with a white-hot firey passion.  Because the people who put them up want to have all the balloon glory without the effort.  Look, y'all, balloons are not meant to be durable goods.  Balloons that don't deflate and fall are just a sham, plain and simple.  If you want to claim you're having a never-to-be-matched sale event, then get your helium tank out there and inflate a mess of balloons up proper!  Don't try to fool me with your always-inflated, low prices every day impostors.  It's not a big event if it happens every day.

That's how it is.  We humans are so prone to getting into ruts that we actually try to convince ourselves we aren't in a rut when we definitely are.  We think we're clever, but we're just hiding from an unfortunate reality: we like being in ruts.  They're comfortable.  Like old shoes.  I don't want to buy new ones even if my old ones have holes in the bottom because THESE SHOES JUST GOT COMFORTABLE FOR CRYING OUT LOUD.

It happens with our faith too.  It's not that at some point we decide we know all we need to give up.  It's just a rut.  We practice our faith the way we practice it, going to church when we do or giving or participating however we do without really thinking about it.  It doesn't matter if it quit nourishing our souls a long time ago.   We put up fake balloons to convince ourselves that it's fresh and new, but we know the truth: those balloons, along with the cock roaches, will be all that's left when WWIII ends (at least that's what the warranty claims).

So I'm going to do something I don't usually do on the blog.  I'm going to issue a challenge.  Get out of your rut.  Find a new way to put your faith to practice.  Something small.  Something large.  It doesn't matter.  Just intentionally do something different [Editor's Note: 1000 points if you put your rut-evacuation plan in the comments below or on the FB post].  Blow up some balloons and give them away if you want to.  Just make sure they're real balloons.
Posted by John at 4:24 PM