All over social media, I've seen my friends and colleagues posting videos of their triumphant Easter services.  Flowers.  Orchestras.  Singers as far as the eye can see.  Sanctuaries overflowing with the faithful.  It's grand.  It's festive.  It's everything you'd expect when we're celebrating the person who literally divided time and largely defined life as we know it (regardless of whether or not you believe in the theological aspects).  That's especially true when you remember that people are having the very same over-the-top stunningly inspiring worship experiences all over the world.

We had our own stunning experience here at Decatur First.  I could fully justify that statement with a play-by-play rehashing of the experience here from beginning to end.  I won't do that just now, but if you'd like to hear it, feel free to email me for detailed analysis.

And that, of course, follows a whole week of observances.  At Decatur First, we had a grand Palm Sunday celebration (complete with bubbles!).  We had a service each day (complete with UMW sandwiches!).  We had a Maundy Thursday Taize communion service.  And then on Good Friday, our choir, with orchestra, presented the Mozart Requiem accompanied by a script imagining all the events of Holy Week through the experience of Tabitha, the woman from Joppa who was raised from the dead by Peter.

All of those things went very, very well.

And yet, as the service was drawing to a close, I looked out at the congregation and felt an odd sense of melancholy.  Here is this moment of high celebration, when our sanctuary is brimming with the glory of the resurrected Christ, everyone firing on all cylinders, and instead of riding that wave of energy and grandeur, I felt a little like Eeyore up there. 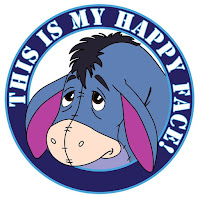 At first I thought it was anticipatory melancholy at the fate I fully expect to befall us this coming Sunday: we simply will not see most of those people for either eight months or a year.  In a sense, Easter can be the annual reminder that we aren't doing a great job in the church.  People still feel the need to embrace their spirituality, and once or twice a year they reach out to the church to help with that--but we don't do it well enough that they feel they'll benefit by returning the next week.  Not that I think that's a conscious decision on their part.  Just...other things get in the way, and before you know it they're looking at the sign for Christmas Eve services and thinking, "I just love the candlelight thing...I sure hope Lee Proctor's going to be singing O Holy Night with Laura Rappold again this year."  Christmas and Easter could be a harsh indictment of the Church.

I don't think that's it.

Did you ever go to a funeral, and someone said, "We should really get together sometime other than a funeral...every time we see each other there's all this sadness..."  The regret expressed there isn't just that sad circumstances are drawing people together.  The regret is that those relationships are not a higher priority than they are.

To be clear, that regret is pointed inward, not outward.  The people at the funeral aren't saying they wish they were more important to someone else.  What they're saying, at least subconsciously, is that they wish the others were more important to them.  They realize the relationship isn't what it once was, and they are mourning its loss as certainly as they are mourning the loss of whoever died.

I sure was thrilled to see so many people I have been missing!  But for every one I saw, there were so many I didn't.  Friends.  Family.  Relationships that are fading or have faded.  Mind you, it's mostly for good reason.  People move away.  Life happens.  The life cycle of relationships is like the cycle of life itself, after all.  But that's sucky, and I don't like it.  Go back and take a look at your high school year book.  In the front and back cover.  Keep in touch, right?  Sure thing.  It took me back to that moment a year ago when I realized I had not kept in close enough touch with Bob Fleming, and I would never have the opportunity to reconnect with him again.

All of this is pretty depressing for Easter, I guess.  But there is hope in the way of Christ.  Not, in my mind, hope that I'll be able to reconnect with these folks after I've been run over by a beer truck one day. 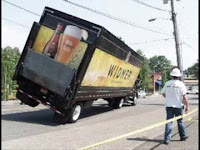 I can't speak intelligently to that reunion.  But I know the great hope of Easter is that Christ lives.  He lives in us.  If we truly seek to follow, we are continually shaped by his presence.  In a similar way, even those relationships that have faded have left fingerprints on us, and people we have long lost touch with--even people we can't remember--will live on in us.
Posted by John at 5:04 PM