Today I headed downstairs early to write my senior notes and work on the blog.  I was able to get those notes done (and the record will indicate I didn't cry even once while writing them).

We had a minor injury in the workout room before we left, but we were able to take care of it, and the injured party will make a full recovery.  He hurt his foot on the elliptical machine.  When Tait and I were looking at his foot, I suggested we may need to amputate, so I pulled out my pocket knife.  Tait said, "Do you think we should get him some hot chocolate to drink first?"  I suggested he get a fork to put in his mouth to bite down on.  I wish someone had a camera to catch his face when I pulled out the knife--both the look of horror when he saw it and the smile/almost laugh when he realized (quickly) that we were kidding.

We boarded the bus and headed to our concert, not far away: Pacifica Senior Living.  For the record, we were 30 minutes early.  That gave us a little time to warm up and such.  We went ahead and gave the youth their folders to hold, but we started the concert with the folders at our side, and that's where they stayed.  Only one song was...questionable, but the notes were good.  The words got a bit dicey.  We'll shore that one up on Sunday before we sing our homecoming. 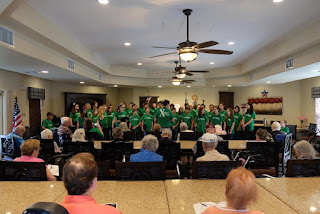 This dry heat was rough on us.  Some combination of not enough water, too much sugar, too much heat, and standing for the whole concert I guess.  Four or five people had to sit down during the concert at different times (not counting the one who was seated with his leg elevated the whole time).  One person actually passed out just as he was walking past Neil, who bolted to action.  The choir handled that magnificently...kept right on going.

I was once again reminded how amazing our chaperones are and how completely I trust them.  They took care of him.

You're used to me posting pictures like this after the concert, but this is before the concert!  Lea is an alumna of our little band: she just graduated from college.  She got inside before a lot of the choir, and she immediately started chatting with residents.  It's like she was programmed. 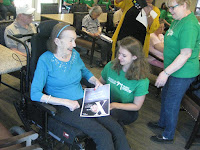 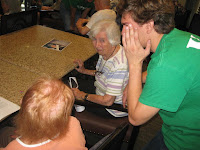 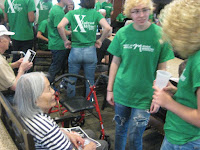 The time before the concert gave me a chance to peruse their video library.  The room we were in is something of a multipurpose room, so there were a number of workout videos, including some Jane Fonda and this, my personal favorite.  For the record, it looked absolutely the most used video in the collection.  So if you want to pursue fitness, come talk to me about my new conducting fitness program scheduled to start at DFUMC sometime this fall. 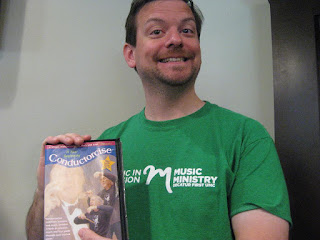 There is one singing youth this year who has been around for all 10 tours.  She missed a couple the past couple of years, but she was with us on the very first one (because her mom was a chaperone, and she had to come along).  She actually shared about this on Senior Night, recalling how I came to her about half way through the week and said, "Do you know the songs?"  "Yes."  "Suit up.  You're singing with us."  Her mom sent me a picture, and I took another yesterday.  Bookends.  I had not noticed that the color print on the Imbeni program was green...which matches this year's shirt, and this year's program is predominantly black/white/gray (with a splash of color) which matches our Imbeni shirts, which were gray and black with a splash of red. 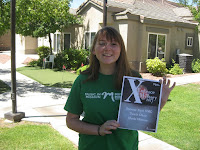 We had some lunch.  I finally was able to have Arby's with Amanda.  And the youth were able to enjoy Dairy Queen, courtesy of their mentor/sponsors, who had purchased them gift cards.  On the bus!!!

When we stopped for fuel, Matthew handed me this.  He gets me. 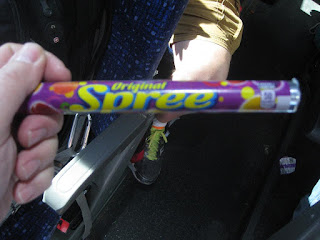 We made a stop at Eylmer's Bottle Tree Ranch.  It's...exactly what you are thinking?  Probably better to just put some pictures up and let you see the awesome. 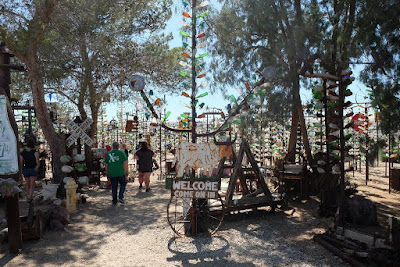 We took a bottle of our own, and we all signed it.  Eylmer came out while we were there, and we gave it to him.  He said he'd find a place to use it. Somewhere there is a picture of the bottle, but it is not at this moment on my computer, so I can't include it.  Apparently a lot of his bottles disappear, so he was happy to have ours.  Here he is talking to Vince.  Nice hats, guys! 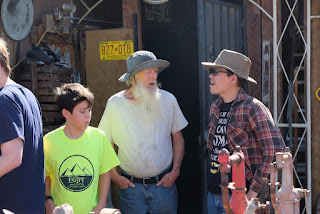 Naturally we had to have a group photo with Eylmer.  He was a fun guy. 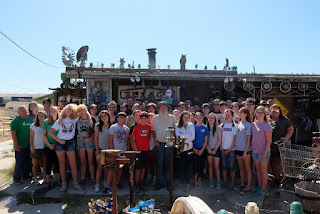 Then we decided, after the picture, that we'd like to sing to him.  So we sang "Keep Your Lamps."  He enjoyed it.  He said, "That's great!  And there's a lot of truth in it too!" 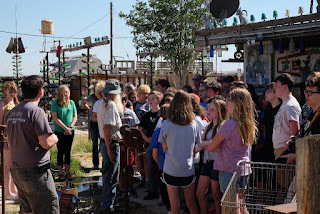 From Eylmer's (we are on a first name basis), we headed to the Griffith Observatory.  The traffic around it was...intense, and for some reason there were a bunch of people honking.  I'm not sure what they were trying to accomplish.  We bailed out of the bus about half way up the drive and walked the rest.  By the time we got there, took a picture, and looked around for a minute, the bus was there to pick us up and take us to dinner.  You have a great view of LA from here, including the Hollywood sign, although time of day made getting a good picture of that sign difficult. 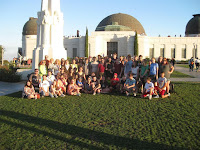 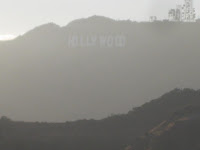 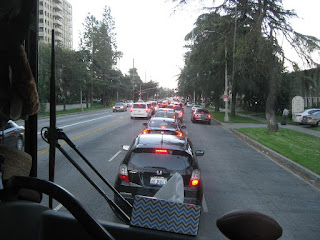 We went to the Galleria for dinner.  This was another chaperone dinner, so folks ate with their chaperones one last time.  Since I don't have responsibility for a room, I had dinner with the alumni room.  We went to Red Robin and basically wrote the screen play for 3 different movies (well, an action movie, its sequel, and a romcom set in the clothing store across the mall).  It was fun.  Cindy sent me this picture of her room. 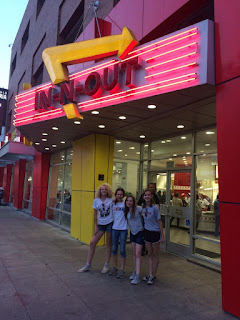 Let me say one more word about our chaperones here.  It takes a special person.  You can't really be a chaperone on this trip unless you care about my kids enough to invest in them.  It's not just about making sure they get up on time or keeping them alive.  It's about connecting with them.  Kindof like the relationships with their mentors that we are trying to spark, actually.  Sticky faith.

I laugh with them.  I consult them.  I trust them completely.  And I absolutely could never do this without their support.  Thanks, you guys!

Our final stop: the Manhattan Pier.  We walked out over the ocean (it was cold, and we didn't really have the time to deal with going down the beach to the water, but because it was cold I don't think the youth cared all that much).  We turned and faced land, took a picture (but not with my phone, so I hope someone sends me one), and chatted for a moment.

"Embrace the mystery.  We have arrived in LA, and you might think that was our destination.  If you look back toward the land, our whole journey is in front of you.  We've been on the bus for days.  We've shared adventures.  And through all of that, we grew together and became stronger and more cohesive.  You can hear it in our singing, and you can see it when you watch us interact with each other.  You think the destination is LA, but is it?  We'll be here in LA for less than 24 hours.  No, the truth is that the destination was the journey itself." [At this point a couple of youth said, 'I knew he was going to say that.']

I encouraged them not to miss where we have been together and all we have done along the way.

Saturday our 6 day-drive becomes a 4-hour flight, and we go home.  Catch us Sunday morning at 11:00, when we'll worship together and consider, one last time, what it means to Embrace the Mystery.
Posted by John at 11:03 AM