Well, I was up in plenty of time to take pictures of breakfast this morning...but I didn't.  Standard fare, including of course my beloved DIY waffles, but I got into a conversation with Anna Lippy about predestination.  I guess we might say God had already decided I wouldn't be taking pictures of breakfast.  Honestly I'm beginning to wonder if I'll get pictures of breakfast at all.  You might wind up having to use your imagination.

Our morning was a bit later this morning; we didn't have to leave the hotel until 9:00am for our morning concert.  This morning's concert was at the Oklahoma Veterans Center in Norman, OK.  They house veterans there from 30 years old to 102 years old.

I'll just lay it out there.  This may not have been the best concert we ever sang.  We were a little scattered...all of us.  I forgot to do the ending drum part on one of the songs.  Just blew right through it!  And there were other foibles as well.  So when we got back on the bus, I said, "Alright, gang...what'd we learn?"  We learned we don't need to skip warmups ever again.  Ever.

The Veteran's center was a nice venue with a great crowd.  Actually as I'm thinking about it, we've had all great venues this year...plenty of space and interested audiences.  That makes singing all the more rewarding. 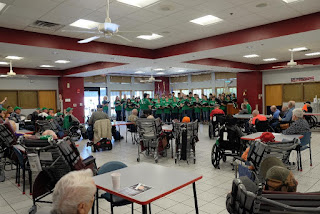 I've noted the comments about being buried in the music.  The truth is we still don't know the music quite well enough to go off book, though many likely could.  I'm debating using the books for tomorrow's concert.  After that there is just one left...we'll see how that pans out. 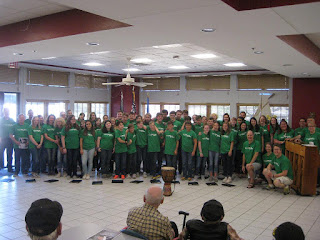 A couple of shots of our audience that I enjoyed.  No particular reason, really...

Out of our 3 audiences, 2 have included a dog.  This guy's name is Sarge.  Sweet dog!  I think he enjoyed the concert too. I know our youth enjoyed giving him some attention, and it prompted a few of them to suggest we bring a live puppy mascot next year. 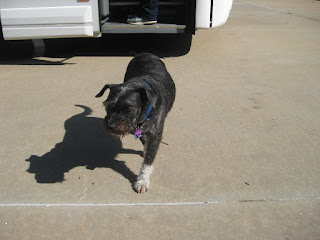 Again...visiting.  I haven't asked the youth to tell me stories of the people they are encountering yet.  Perhaps I'll do that tomorrow. 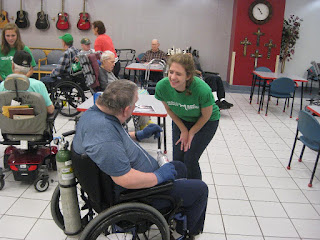 There is a bizarre phenomenon happening on the front row.  The rising 7th grade boys seem to be having problems with their knees and backs.  Bless their hearts.  Also they seemed to be extra tired because they've been yawning in concert.  We've taken steps to eliminate the yawning, and fortunately Tait is a health and PE teacher, so he could teach them some stretches to get them all straightened out. 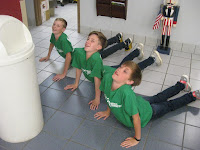 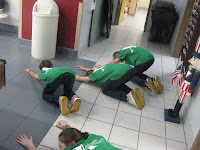 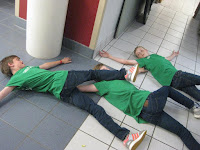 We changed on the bus again (we're getting really good at that...which is maybe not the best, but it keeps our shirts from standing up on their own, so it's worth it).

With the youth still wondering where we were going, we headed out.  We stopped for lunch about 45 minutes from our concert venue, where we discovered that at least out here Walmart parking lots tend to represent your best chance of locating multiple options for food.

And then...we got back on the road.  We keep doing that.  The wheels on the bus go round and round...and the wheels on this bus really have!

We've been trying to find interesting things and places along our way.  Virginia (who helped me plan) found some of the coolest places.  One of those places was Cadillac Ranch.  This is a modern art installation, build in 1974.  Apparently you can add to the creation if you'd like...you just have to bring your own Krylon!  Knowing this was the case, we brought along some paint. 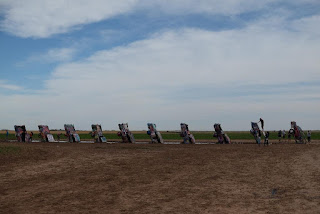 There were a few cans on the ground, and you'd better believe the youth picked them up and tried to use them.  It was kinda sad.  Until Virginia and Katherine broke out all the brand new cans we had brought!  We broke them up into rooms, gave the chaperones a can each, and let them engage their inner Picasso. 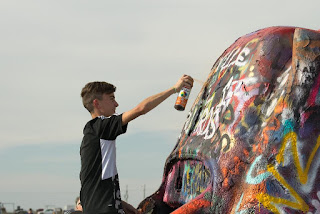 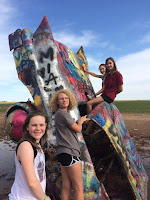 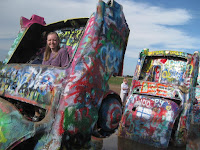 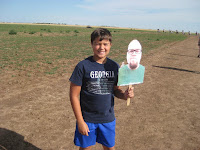 Strangely enough, Bill didn't want to paint.  The John on his shoulder told him he shouldn't graffiti.  Most folks left a mark behind somewhere.  It was tricky because a lot of the cars were in the middle of small lakes due to rain.  Still, where there's a will, there's a way.  You can't expect these messages to be there longer than a day or two at best.  There were only two things I wanted to say when I got the cans in my hands.

A few of the youth and chaperones commented that I was a little too good at writing with spray paint.  Heck, these cars are easier to paint on than water towers and overpasses.  This was relatively simple by comparison.  [Full disclosure: even though I am from Arkansas, I have never actually spray painted anyone's name on an overpass or a water tower, nor have I ever had to take a can of paint up a water tower to defend my sister's honor.] 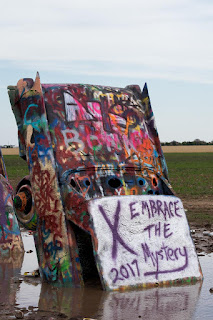 A few folks headed back to the bus a little early because of the fumes, which were honestly intense (you could smell spray paint all the way at the road).  Owen decided it was his turn to drive.  Also worth noting here: you have a good view of the right side of his face, which does NOT have a baseball-print on it this year.  We warned him to be careful when we were watching baseball movies. 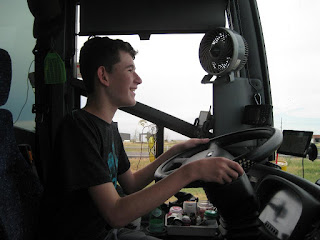 Matthew Waller, Paul Petersen, and Tait Anberg have been contributing a lot of pictures to this blog the last few days, and I haven't identified them as such.  Matthew took the one below, though.  I love the road sign and windmill.  PS there are 112.625 metric crap tons of windmills out here. 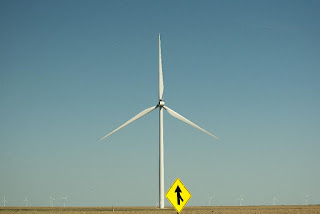 About 30 minutes down the road from the Cadillac Ranch, we came to the MidPoint Cafe.  I owe the guy there a HUGE apology.  We got there after we thought we would (go figure).  He had come to open the gift shop for us and waited for a while.  That was super nice. 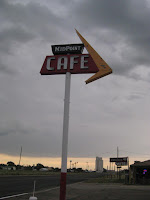 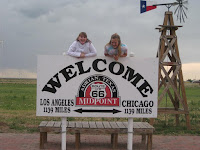 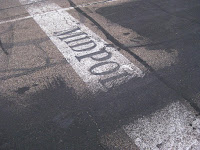 We've been getting a lot of group photos on this trip, which is actually kindof the point in a way.  Here we are in front of the MidPoint Cafe.  Mad props to the second row kids, who are kneeling on asphalt.  Way to take one for the team! 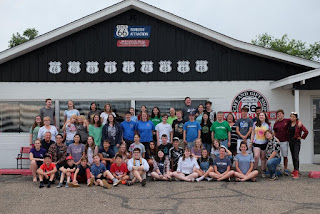 On the bus yesterday we watched Pee Wee's Big Adventure (which is just as awesome as you remember it) and Cars, an epic animated celebration of the Mother Road.  Beside the MidPoint cafe there's an old gas station that isn't a gas station anymore...with this truck parked out front.  We met Mater's younger brother, Tater (when he was little they called him Tater Tot). 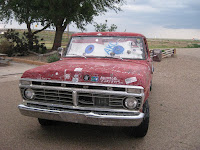 Also along the road, we found our tour bus for next year.  Unfortunately I missed the chance to photo the lamps and curtains on the front window, which more than double the flair of this fine piece of equipment--if you can believe that.  Mark said he'd drive it.  We are currently negotiating the price. 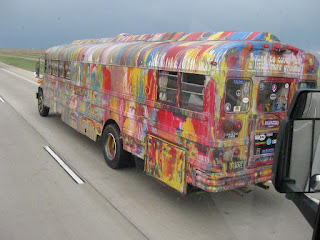 We stopped for dinner...somewhere in the middle of nowhere.  It was exit 332 in New Mexico.  I decided not to try out the "Lotaburger," because it looked to me like the kind of place you could check out but never leave.  Ultimately I decided they called it that because you buy a burger and there's a very very tiny chance that you will get the burger made with beef.  That's not fair.  I didn't go.  Instead, I went to Pizza Hut Italian Bistro (that's the name that was on the sign) with several other folks (including, though not pictured here because he was beside me, Mark the bus driver, who has for the record worn his tour tshirt every time the choir was wearing theirs!). 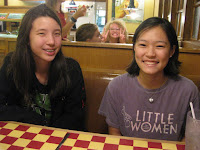 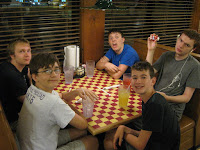 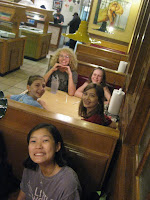 We had intended to have a special stop for a special treat, but the place we were headed closed at 9, which we missed because we spent extra time at a few stops along the way.  So that was a bummer.  I'll have to see if we can make it happen in the next few days.

I went to check us in at our hotel, and let me tell you something about the Hampton Inn Santa Rosa.  If you EVER drive this way (and I know you will), USE THIS HOTEL.  Let me tell you why:

1. They were completely ready for us, including writing our room numbers on my rooming list, so I didn't have to spend any time transferring their list to mine.
2. They put us in a solid block of rooms (except we didn't use room 208, leaving me to wonder what's in there).  That made taping and untaping easy.
3. They were super nice.
4. And really just next level amazing...

It was Simon's birthday yesterday.  His mom called Santa Rosa trying to have flowers sent to the hotel, Santa Rosa is too small for a florist.  So she called the hotel for help.  The staff at Hampton Inn WENT BIRTHDAY SHOPPING FOR SIMON.  They got him Vegan snacks, people.  And a couple of other things.  What I'm saying is they went shopping and they did so thoughtfully and with great care.  So when I came back to the bus with the room keys, we sang happy birthday and I was able to hand him a present from his mom by way of the Hampton Inn Staff.

Technically this picture is out of order, but I wanted it to be last.  It's taken through the windshield of the bus as we (literally) headed off into the sunset.  We had been through intense rain, and the clouds were just beginning to really break up as the sun was dropping below the horizon.  As my grandmother use to say, "If you painted it that way, they'd never believe it."

It was fleeting, and something I obviously neither planned nor expected, and it reminded me that sometimes embracing the mystery means staying attentive to what is going on around you and listening closely for the Spirit.  Sunset lasted less than five minutes.  I'm glad I didn't miss it...though a little part of me wonders how many times I have missed something because I wasn't paying enough attention. 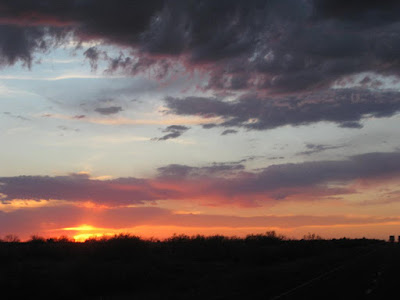