Wednesday, June 7: Your chance for a ride-along.

In planning, sometimes it's hard to know just how long things are going to take.  I've been at this a while, and I've gotten better at it, but there are so many variables...and a relatively small problem often cascades into a larger one.  Like...bathroom stops.  Or the fact that the bus can only drive 68 miles an hour.  We're never going to time travel if we can't make it to 88.  And to be clear, time travel might have been beneficial.

It all started on track.  We've been arriving at our hotels after dark, which on the one hand is great because I get to see great sunsets from the front of the bus (innovative presentation of yesterday's sunset below).  On the other hand, it's not so great because I don't get to look outside until the morning.  So this was the view that greeted me this morning.  I can see for miles and miles. 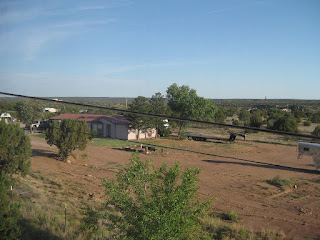 GREAT NEWS!!!  I got pictures at breakfast, which included pictures of DIY waffles.  Reina will have to tell me at some point if both of those waffles belong to her. 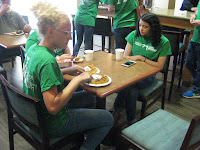 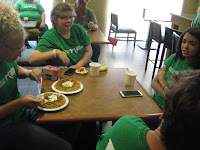 After yesterday's amazing show of commitment to their customers, we couldn't leave the hotel without saying thank you, and we decided to do that by singing.  Even though we aren't staying at Motel 6, we decided to sing "Keep Your Lamps [trimmed and burning]."  It sounded pretty good for a hotel lobby, and I understand the desk person was quite moved by it.  They certainly deserved it given all they did for us! 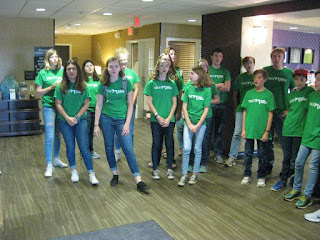 Despite the extra time for singing we made it to our venue (Rio Grande Gracious Living) 20 minutes ahead of concert time, which gave us...be still my heart...time to warm up!  That's even though we had to start out by driving from Santa Rosa to Albuquerque, y'all.  Mark felt like something had to be wrong... 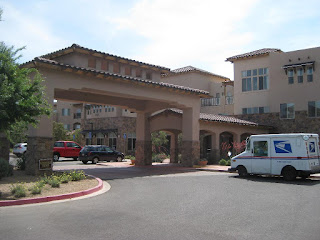 The warmup really helped.  You might be surprised how effective 10 minutes on the bus (no piano) just singing through some things can be.  And I got to hear Cindy's devotional, which was great.  This was easily the best concert so far. 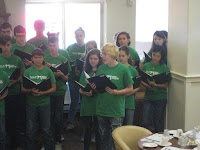 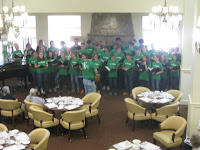 I know by now you're wishing I weren't posting so many pictures of youth talking to the audience.  If you've seen one you've seen 'em all, right?  Well, wrong.  The whole point is that each person we meet along the way is important.  People matter.  Each person in each picture (both youth and audience) brings a unique story to the photo.  Don't think for a minute this is routine.  If it's routine we aren't doing it right. 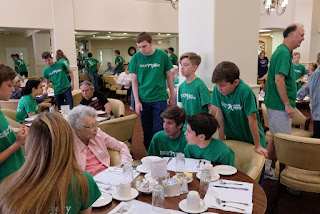 Interesting observation.  Well, interesting to me.  As you can see from the first picture of Rio Grande above, it's unique, and I've never seen a place like it.  But when we went in, someone asked where the bathroom was, and I could tell them...because the inside layout, at least as you enter, was just like a few other places we've been.  Nashville, I think.  Maybe Knoxville as well.  So somewhere, in a previous tour, I have a picture of the choir on steps that look just like this...  You're right.  That's not as interesting as I thought. 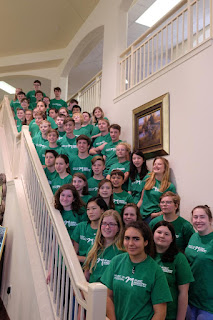 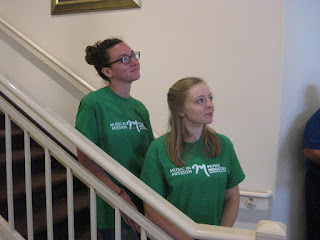 We went to a mall in Albuquerque for lunch.  I was sitting in the food court with some friends, and I looked up and saw a little convoy of these... 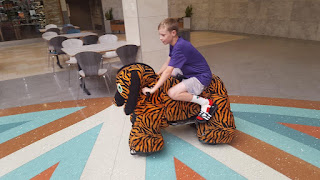 To be clear, Noah is not the only one.  There was a whole gaggle of people on these little critters.  "We have some time where we don't have to be sitting down riding...what do you want to do?"  "Oh look!  Something we can sit and ride on!"

And Vince and Amanda did some virtual reality...  So what you're telling me is the holodeck is real?

I mentioned lunch with my friends.  I went to college with Mary.  It's been a long time since I've seen her, but as is the case with all good friends, it was as if we've never been apart...just sortof picked up where we left off.  And she helped me find some postcards. 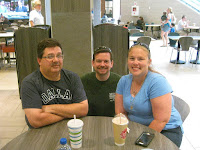 We set our face to Sedona, Arizona.  Actually, I set my face to Sedona.  I had a few youth who set their face to Phoenix, and a couple to Flagstaff.  There are a couple of youth who, somehow, have received a leaked copy of the itinerary.  So they knew, I guess.

Along the way, we passed Winslow, Arizona.  You KNOW I wasn't going to go past without standing on a corner.  It turns out there's a whole park right on the corner.  They even have a flatbed Ford there.  So yes, another group picture. 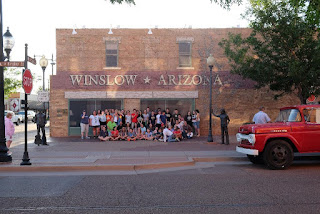 Now.  You're probably saying to yourself, "Self, John has lost his mind if he thinks those kids know and appreciate what it means to stand on the corner in Winslow, Arizona."  You are right.  I've lost my mind.  But we already knew that when I decided to set out on this trip with a bus full of crazy kids, right?  I did ask the youth how many people knew the Eagles and/or Take It Easy.  Virtually none.  So we had a moment of education up in here.  Played the song.  Sang the song.  Played some other Eagles songs.  Generally tried to fill in this serious gap in their education.

I also got a few pictures of individuals.  I love this one of Cindy and me.

There was a guy there taking a bunch of pictures with a selfie stick.  He was clearly the only person there as excited as I was.  He pointed out that it was possible to get the picture below...so you get the whole song lyric in one photo. 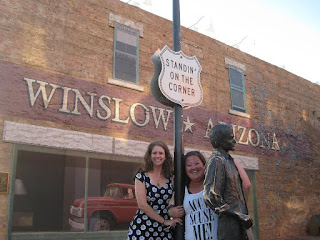 And another old-school selfie. 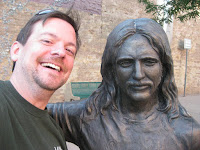 Finally got a good picture of Mark to put on here.  He really has become one of us.  He wears his tshirt and jeans whenever we wear ours.  As I was thanking folks near the end of our concert, the sopranos (kindof en masse) pointed out that I had not thanked Mark.  So I did.  We all clapped--and we headed for the bus. 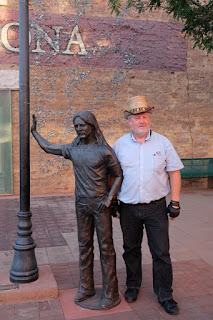 And then, surprise surprise, we got back on the bus and kept driving.  We stopped in Flagstaff for dinner and an open-air mall.  Lots of choices that weren't McDonald's or a Love's Station snack aisle, which was nice (and is probably why it took a little longer than it should).

I was eating with Emma, Anna, Chris, and Katherine.  There were two musicians there, one playing guitar and the other playing cello.  Anna, out of the clear blue, says, "Ok, for the purpose of conversation, the one standing up playing the guitar is Thad, and the sitting down is Theo."  As a table, we then created a whole story of these guys and how a girl (our server) came between them--like Chris said, the Yoko of their group (which we decided was called TnT).  Theo was thinking he might go off on his own, which is why they were playing more solo music than playing together.  We mentioned this to our server (except not the part about her breaking up the band), and she said, "They have a CD over there."  She brought us one...and it was just Thad--which played perfectly into our narrative.

We decided we would take a picture with them, and then as we were leaving Anna and Emma would say, "Thanks, Thad!"

So we asked if we could get a picture with them, and That (you can't make this up) says, "You just want a picture with me?"  I could almost hear Theo say, "It's not all about  you, man.  I'm done with this."  I think that happened after we left... 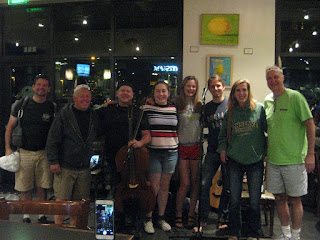 ...and is part of the reason we were late getting on the bus.

Going back a little to show you the sunsets again.  One parent is waiting for me to put up some pictures of sunrise.  That is...unlikely. 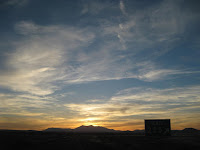 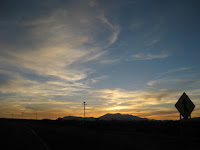 And finally a couple of videos to show you what it's like riding the bus into the sunset with 45 youth...


So anyway we were late getting to our hotel...actually arriving a couple of hours after I thought we would.  As I mentioned, part of that is due to speed and part of it is due to stops.  But as much as anything else, if not more, today we took time where we needed to take time.  We savored the journey.  I've said it before about these music missions...that it is really about the journey rather than the destination.  It has never been more true than on this trip.  Slow down.  Notice.  Enjoy.

That's really, really hard.  We have places to be.  We have appointments to keep.  There are only so many hours.  I keep thinking about that.  We were supposed to be in x place at y time.  We have to make sure we reach this landmark by that time.  But it goes back to those picture of the youth with the audience, really...being present in the moment.

That's an ongoing battle for me: balancing the need to keep the schedule with the need to embrace the mystery.
Posted by John at 12:08 PM