A Long Stroll Down Amnesia Lane: The Details for 6/11

Hampton Inn.  It's mostly solid.  In all my years of doing this, I've had precious few negative experiences.  They are typically very easy to work with.  But I think we all know why I keep coming back.  It isn't the way they always have the keys ready or the way the brand means we'll always have a free place to have a devotional.  It's this: 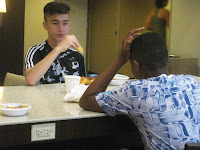 The youth also eat, of course.  I really like this picture of Zak and Jackson.  I'm writing this on Tuesday morning, and they are both down here again.

We didn't have an especially early morning.  I got down around 7:00 to work on the prior day's blog, and we left about 8:45am, headed for Centenary College, my alma mater.  We took the circuitous route, though.  The first place we went was this very famous location:

Back up in there a little bit is the second apartment Lisa and I lived in after we were married, notable mostly because it was our first apartment with washer/dryer connections.  Having knocked on wood, I can tell you that we still use that same washer and dryer.  We also drove by our first apartment, not far away, and the site of one of my car accidents.  The Tour de John always includes coverage of places I've had car accidents.  Are you glad I'm not driving?

We got to Centenary right on time.  (!)  I gave the youth a little tour of the college.  It's not hard to do because the whole thing is about a quarter mile square.  One block.  There are a few places of particular "interest."  This is a Centenary Rose garden.  It was a new breed specifically made with the college's color (though the one you can see blooming looks like maybe one died and they replaced it with one from Home Depot).  Anyway, in addition to being a rose garden, this is also a graveyard.  Just on the left there lies Geronimo, Lisa's beta fish.  He was a good one.  Rest in peace, Geronimo. 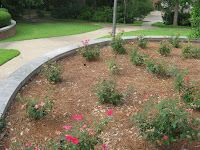 Oe also went to the Hargrove band shell.  I've performed in jazz band and concert band there.  I saw the Count Basie Band there live once!  Now I've heard the DFUMC youth choir there! 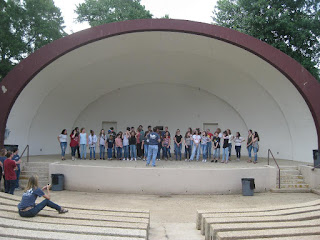 Next we went to the "Choir Loft."  This is where the Centenary Choir rehearses.  I had arranged with Dave, the current director and one of my good friends from school, to pick us up some Strawn's pies. Strawn's pies are LEGENDARY, and peaches are in season.  Dave told them some choir stories...too much to go into here.  He told them about the college.  And then he told them the epic story of that intramural football game.  I began playing quietly profound music as he started.  "So there we were...score was tied, with almost no time on the clock and half the field to go..." 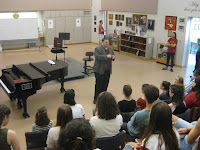 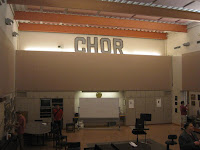 And above on the right...there's no I in CHOIR!  We're a team!  That's the official story.  Want to know the real reason they spell it that way?  Ask one of the youth!  And below, one of my favorite pictures...ever.  I never rehearsed in this room, because it was built after I graduated, but I have rehearsed in front of all those pictures.  I've sat in those chairs and sung with that piano.  They're singing "Let all things now living unite in thanksgiving..."  I can't really explain the connection this created, but I can tell you I wasn't the only one who felt it.  One of the youth mentioned it at our evening devotional time...feeling connected to the history and the people who have sung there. 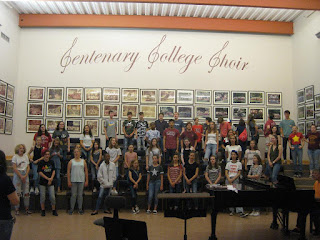 I also didn't realize how much of the way I operate came from the choir.  The pictures.  The thank you notes.  The approach to repertoire.  The focus on relationships.  So much from that experience.  So it's the first time most of these youth were in that room...but they've been a part of it for much longer than even I realized. 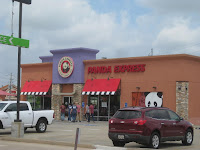 Lunch after pie, of course.  And where there's a Panda, there's a Cowden.  Second only on my fast food list to Arby's.  Don't judge.

And then it was on to our first concert, which was at Holy Angels.  It's a place for people with disabilities.  Most of them are high-functioning.  We can't post pictures that include the people, so I won't post them, but gosh this was a great crowd.  They were very energetic and really enjoyed our being there.  The air conditioning in the room was out, so it was very hot (think surface of the sun, only  humid).  I actually lost about half the front row of sopranos for a bit.  But it was a great concert.  Night and day difference from Saturday night's experience.  Maybe the bus sectionals helped?  I don't know, but they were on fire (did I mention it was hot?)! 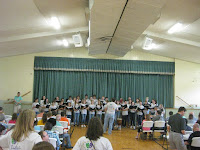 We did meet and greet there, for a bit.  And then it was on to our second concert, which was at the Shriner's Children's Hospital.  The audience in the room was fairly small, but there were a lot of folks milling about, heading into and out of physical therapy, or in the waiting room, and I saw them all turn toward us when we were singing. 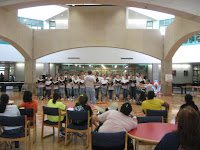 We have two soloists on this tour, and Emma and Hanna are doing a great job!  We also have some alumni along.  Steven is singing in the choir while Bennett and Andrew do their best to motive the choir from the back of the room. 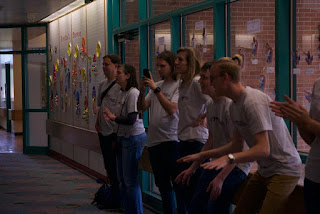 And again, we greeted.  Turns out most of the audience that was in the room could not speak English.  As one youth pointed out in our devotional, though, they all enjoyed the concert despite not being able to understand much of it at all.  If you look in the picture below, you'll see on the left hand side that Daniella is having a conversation with them.  She was able to talk to them in Spanish, which was very cool!  She also translated for them when they asked me to give them the URL for the blog! 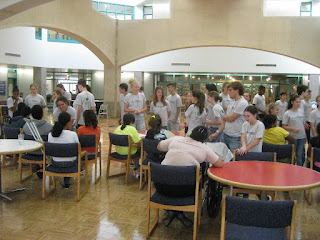 After the concert we headed toward Lafayette.  We watched The Princess Bride, which has been mandatory watching on the music mission bus every year I've ever been on music mission!  I did pause the movie when we got to Alexandria to show the youth where I once...had a car accident.  Actually I was driving Lisa's dad's company truck at the time, and I fell asleep at the wheel (it was actually after a concert I had played in the band shell, pictured above!).  Kindof funny because I hadn't been back to that place since it happened.  I was ticketed in that case for "failure to maintain lane," which while true strictly speaking, was in my opinion unnecessary as a deterrent.  Waking up by hitting a concrete wall is deterrent enough!

We had dinner at Acadiana Mall, and some of the youth did some shopping as well.  Then we headed to the hotel, checked in, and went downstairs for devotional.

The chaperones awarded their flair, which I imagine was difficult choices because the choir as a whole did a great job during both concerts!  Michele said she'd like to award flair to the whole choir.  But choir devotional time is cut-throat, so she had to pick one, as did all the other chaperones. 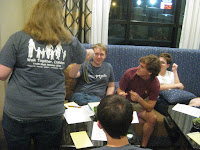 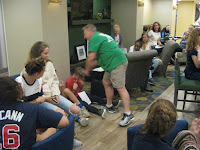 We talked about our experiences throughout the day.  We talked about being thankful (actually we started learning how to write a good thank you note).  We sang a song together.  And then we headed up to bed.  On time.

ON TIME!  I checked everyone in, and I was back in my room well before midnight.  I'm not sure what is happening.  It was only shortly after midnight that I had picked out all the pictures for the blog and went to sleep...and because I have Tait checking doors in the mornings, I'm actually getting more sleep than I have in the past.  I'm thankful for that!

It's been a great time, and I'm looking forard to today!  We have a couple of concerts and head to Avery Island and then New Orleans!  Thankfully for the youth, we are nearly through all the places that have any significance for me...I think they're getting tired of all that...
Posted by John at 9:26 AM