I Think I Saw a Ghost...Wednesday on the Youth Music Mission

On Thursday we were set to have two concerts in New Orleans.  As has been our usual, we loaded up the bus at 8:45.  Also as usual I saw Zak down at breakfast early.  And then it happened.  My mind was blown when Katie came up to me and said, "John.  They have Butterfinger for the waffles.  Butterfinger."

Now, I didn't try it, because I'm not sure the world is ready for the combined awesome of Hampton Inn Waffles and Butterfinger, but I'm pretty sure this is the most amazing development since chocolate covered bacon, which Michele got me later in the day... 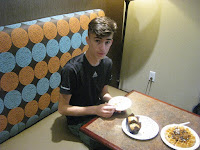 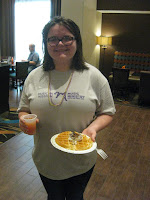 I note the capacity of the breakfast area is 25.  I also count 36 chairs.  We definitely, definitely don't have 60 people in here for devotional at night.  I'm hoping this is referring to the area where they serve breakfast... 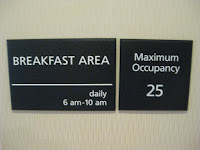 Look at all these pleasant folks.  And Bennett. 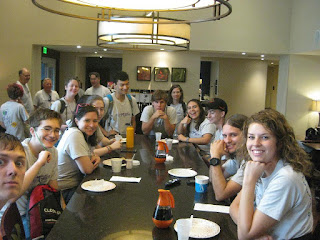 Our first concert was at St. Margaret's at Belleville.  We frequently set up in a dining area, and this was no exception.  We were a bit early, and there were just a couple of folks in the room at the time.  The man, thinking there was nobody there to see, spoke strongly to the activity person about why there was nobody here to see us--and she needed to do somethig about that.  It wound up a pretty good crowd.  And I also noticed we had a small audience back behind us.  The kitchen crew watched us now and then through a crack between the refrigerator and the opening in the wall. 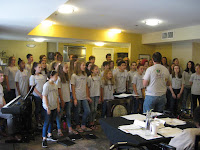 And of course the visiting.  I've noticed, oddly enough, that the senior boys are probably the best at connecting...

...but of course everyone is doing a great job!

Kelsey got a great picture of our poster.  Most of the places have put these up for their residents to see!

I love it when we get to see friends along the way.  Adrienne (alumna) showed up for the morning concert as well.  She came down from Baton Rouge to see us!  She goes to LSU, which is something I struggle with, but it was nevertheless great to see her! 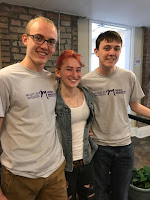 After the morning concert we went to lunch and had a little extra time.  There was a guitar center around, so a bunch of folks went in there.  Andrew is a DJ in his spare time at GA Tech.  He was showing us "some things" here.  It was pretty cool! 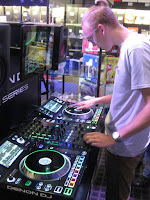 And he wasn't the only one showing us some things.  Sophia and Reina  on the electric. 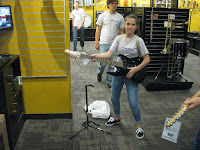 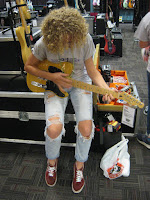 And a bunch of the senior high guys work out their keyboard skills.  I guess watching School of Rock on the bus really inspired them. 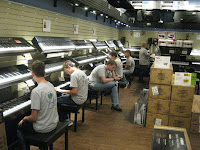 Then there's this guy.  I hadn't heard Taylor play at all.  He's pretty good at the git-fiddle.  And he has the hair to match. 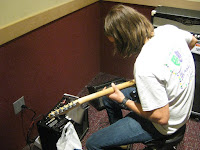 After lunch it was on to our second concert.  It was a fantastic audience, and also the first concert we sang entirely from memory (we had been doing about half of it from memory).  They called us a children's choir here.  Sometimes they act distinctly like children...but for the most part they've been great!  (Note on the whiteboard at 3:00pm). 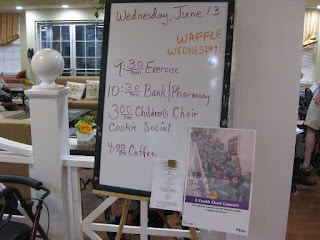 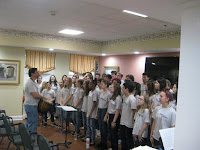 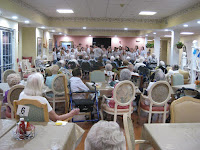 Taylor...what are you doing here?  I don't understand! 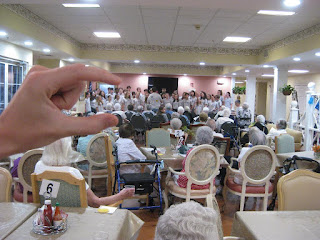 As is most often the case, I had to pry folks away when it was time to go.  Some of them asked if they were allowed to go back in after they changed to keep talking with the residents.  They haven't been talking much about these conversations in our devotional time, but I think that's because I don't really ask. 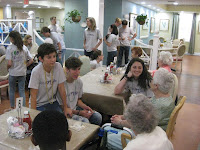 And...more friends!  These are Paul's cousins! 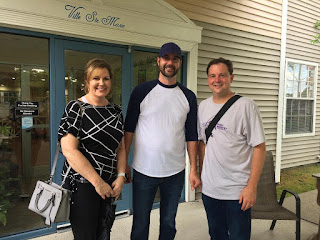 I need to say a word of thanks to Neil.  He's doing a great job accompanying us.  He definitely wouldn't want me to shine the spotlight on him this way, but he definitely deserves it!

After our second concert it was down to the quarter for chaperone dinner and a ghost tour.  The chaperones went with their rooms to find something to eat.  Neil, Taylor, and I, having no specific room of our own, chaperoned each other at Gumbo-Ya-Ya.  Mostly because the sign said "Decatur Taters."  I'm sure they mean our city, not the street right in front of it... 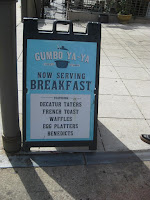 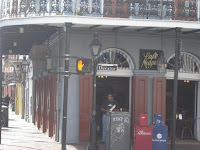 But other groups went other places... 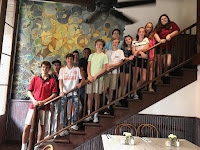 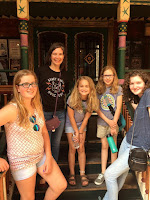 We met on Jackson Square.  The youth mentors bought the chaperones beignets from Cafe du Monde.  And then it happened.  For the first time this tour...we got a late start on something.  In fairness, it wasn't at all our fault.  The second guide for the ghost tour arrived a little late, and the first guide's phone was dead, so he couldn't figure out where she was.  So we were delayed about 30 minutes.  Three youth and three chaperones (of which I was one one) opted out of the ghost tour and headed instead to Hard Rock cafe so Kelsey could buy a glass.  Along the way we learned how to play the stick game (ok...do you know how to play the stick game?). 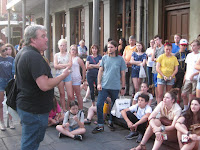 I gave my camera to Taylor to try to get some pictures of ghosts.  He actually managed to get one!  Here you can see the infamous horse and carriage ghost.  The horse breathes fire and has eyes of glowing red coal.  The driver cracks a whip of flame, driving the horse to frenzy as it barrels through the streest of New Orleans.  The passengers are said to be desperately seeking escape from the humidity...in vain. 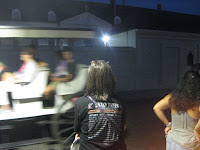 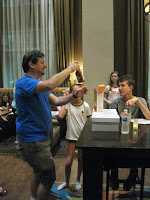 After the birthday celebration, we got to work on thank you notes.  We were about 30 minutes later than I wanted us to be, but it all worked out!  All in all, another great day.  We've had more concerts than we sometimes do, mostly because my new assistant, Mary, is awesome.  The music just keeps getting better, and of course it's heart-warming to see how the youth love chatting with people everywhere we go.  As I type this, we have about 30 minutes before we head to the Whitney Plantation, a swamp tour, and senior dinner!

I'mma let Taylor take us out...