The 2018 Youth Music Mission is underway.  After driving all the way to Los Angeles last year on the "Embrace the Mystery" tour, I decided we needed to have, on average, shorter drives this year.  That conflicted somewhat with my decision to tour to Louisiana (based on the request of a certain chaperone who really wanted to go to New Orleans this year...and since it's her 10th one, I decided to go with it).

To make it happen, we began with a drive longer than any single day on our Los Angeles trip...all the way to Shreveport, LA.  That makes the rest of our drives shorter.  The longer opening day drive meant we couldn't do a concert that day, so I scheduled one for Saturday instead.  We went to Decatur Christian Towers on Church Street.

I'm not gonna lie to you.  It wasn't our best concert ever.  See, in the past we've had a rehearsal on Saturday, which was apparently an important check-in to remember all the things about the music we forgot during May.  So we just jumped into the deep end.  I'll make an adjustment in future years.

But as I've said over and over again, the singing is only part of the experience, and it isn't even the most important part.  The visiting is more important, and we were able to visit not just with residents of Christian Towers but also with our youth mentors.  More on that in a minute. 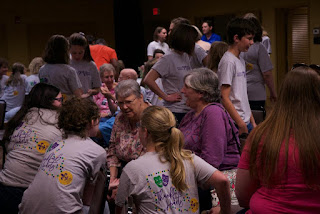 After the concert we went to the church for dinner with our mentors.  This is a cool program that's been aided tremendously by the grow team under the capable leadership of Dennis Coughlin.  Each youth is matched up with an adult member of the church, and they keep in touch throughout the year.  We're still working on the details and improving the program.  It was a time to eat pizza and sandwiches.  And it was a time to catch up with our mentors...a nice time of communication. 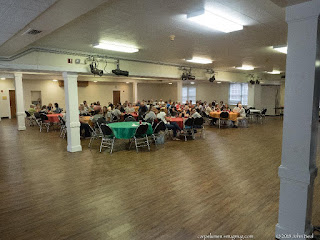 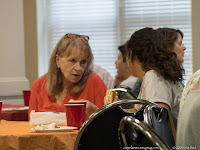 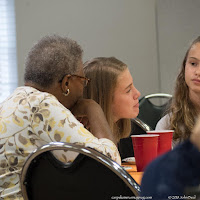 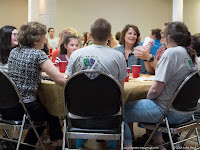 We also had a trivia contest.  Congratuations to this team of fine folks who tied during initial play and then pulled off the victory during "sudden death overtime."  Their prize was fried pies and a photo opportunity with the rubber chicken.  Because...rubber chickens are awesome. 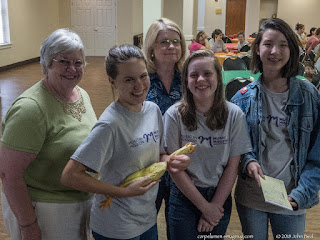 I had the youth help me out with some housekeeping around the church before the left, we had a devotional time, and then they all went home.  I stayed around for a bit working on some last-minute preparations, and then I went home myself, ready to be back the next morning.

I asked the youth to show up at 7:15 so we could load up the bus, which was scheduled to arrive at 7:00.  At 7:30 I checked with the driver...and, uh, there was a delay.  More time to chill, I guess.  At 8 some of our mentors came for our commissioning service.  Dalton offered a devotional with communion. 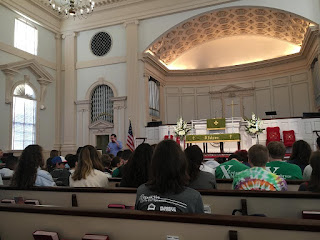 And then back outside to wait some more.  We lined up in front of our bags to stick our thumbs out for a ride.  And, much like going to the bathroom while waiting for your food at a restaurant will certainly mean your food arrives while you're gone, as soon as I snapped this picture the bus rolled up.  We loaded up and got on our way. 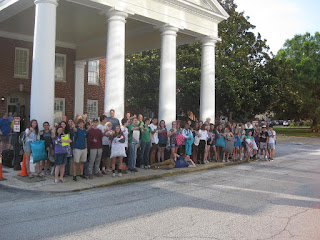 First order of business: install Dashboard Jesus.  We absolutely cannot proceed without him, ever since he prevented Chaperone 1 from getting a toll ticket in New Jersey. 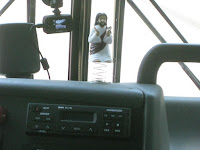 We stopped for lunch, and...Arby's.  Amanda James, this picture is for you.  And yes, I mixed up some Arby's and Horsey sauce for my fries.  Duuuuuuuude.  Also, if you're interested in a business opportunity, I firmly believe what we need in the Tucker/Northlake area is an Arby's. 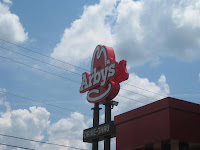 We arrived at North Highlands United Methodist Church at 6:59pm.  We had been scheduled for 7:00pm.  I was absolutely shocked.  I forgot to get a picture outside the church, but I took this one inside.  It's a pretty sanctuary. 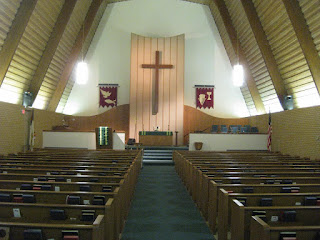 We weren't there for a concert.  This church is the reason I am in music ministry.  It was here back in the early 2000's that I took a part-time job as music director for what I thought would be a 1-year side track to my plans to conduct an Air Force Band...and here that all those plans went out the window.

When I called the church to ask if someone could let us into the church, I told her who I was (she was not there when I was).  She said, "Oh, I've heard of you."  Yikes!  She also said they would love to provide dinner for us!  So this little church with at most 30 attending on a Sunday provided a yummy meal for 61 of us.  So many memories in this little room.  Back in the left corner Lisa and I had our first church directory photo taken.  in the corner to the right (and behind the camera), that's where the praise band set up when we did our contemporary service. 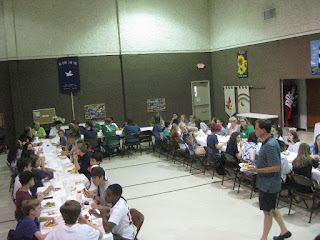 In the hallway on the way to the sanctuary, there's a gallery of all the pastors who have served the church.  These two are special to me.  The guy on the left is the one who welcomed me into the Methodist church and officiated at our wedding.  He also plays tenor guitar, and I once recorded some of his music.  The woman on the left is my first boss in the church, and one of the people most responsible for my decision to serve in ministry.  It would be hard to overstate their importance in my life journey. 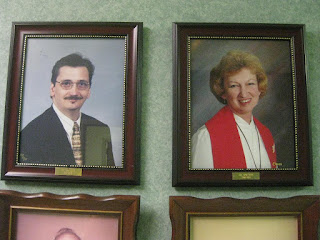 I crammed all the kids into the choir room.  This room housed bells, choir, the library, the robes...basically the whole music ministry.  We barely fit!  My folder slot was on the right just behind the closet door there.  It sounds like pure nonsense, but what I said to them was, "If it weren't for this little, kinda ugly room, you wouldn't be in this little, kinda ugly room."  What I meant is that this is the room where I started, and it was a single step on the journey to where I am today--a journey that led me to Decatur First--a journey that led me to each face in this picture.  So this picture, oddly enough, merges the very beginning of my ministry with my current state...a rare moment. 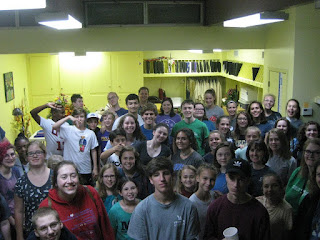 We sat out in the pews, and I tried to explain what I was feeling and how much it meant to me.  I didn't do a very good job. 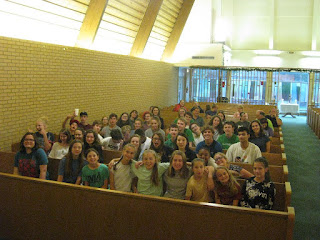 I went to the seats in the choir loft and told them who sat there.  This is Maurice's chair.  This one goes right in front of it, and I know that because it has this little bracket on the back that Maurice used to stand up.  This was Nancy's seat.  This was Jon Oliver's and, Ann's.  This was Chuck Strickland's, and Daphne's.  I could go on.  Each seat has a face and a story (and in one case a terrible joke about a guy getting behind in his work).

We sang for our hosts.  I stood in the place I stood so many times before.  It was different, and at the same time it was the same, familiar, comfortable. 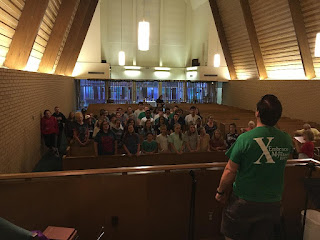 We went down to our hotel and had a devotional time where we talked about being thankful.  The first step, I told them, is to be aware of what you have to be thankful for...and more importantly who you have to be thankful for.  Sometimes you don't know in the moment how significant a place or a person is.  It's only in retrospect, looking from the perspective of many years on, that you realize how much they matter and what difference they make.

I thought I knew how I would feel when I came back to North Highlands.  Curious and maybe nostalgic.  I wasn't ready for the emotion that came with it.  I tried to explain this to the kids.  Again.  And I didn't do a very good job of it.  Again.  Hopefully one day they'll understand. 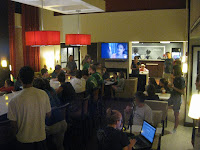 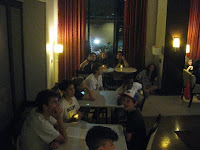 And finally, in parting, a short video of Dashboard Jesus.  You can just feel the peace...


On to the new day...waffle for breakfast, of course, and now more nostalgia!  This is going to be the youths' favorite.  No it isn't...
Posted by John at 9:45 AM