Tuesday: More detail than you can shake a little red stick at!

As usual, our morning started with the breakfast of champions.  I come down at about 7 and start working on the blog.  The youth filter through.  Zak and Owen are always down here first thing.  It's amusing to see who comes down and when.  I especially enjoy telling people they can't take waffles on the bus. 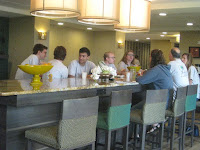 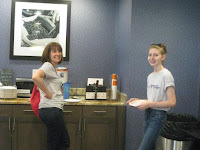 Of course, if you come down and eat at 7, you have a little time to kill.  This is what Owen usually looks like when he's done.  He's actually sitting next to me right now, and he looks just like this... 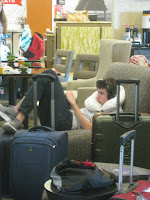 It was a short drive to our first concert, which was at a women's and children's hospital.  They put us in a little classroom.  We had some time to run a song or two, and then we sat to wait for the start time.  Did you hear that?  We had to SIT and WAIT for the start time.  I knew you wouldn't believe me, so I have proof. 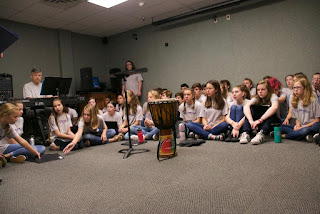 The singing was good.  We tried several things from memory, and we're really close to having the whole program memorized at this point.  We just need music for a couple of songs.

At devotional last night, someone said their favorite part of the day was that one of the kids in this concert was not really smiling or engaged much...until I messed up and we had to stop and start over. I just lost track of how many times we had sung something and tried to cue Emma to come in, but she looked at me like I had lost my mind.  When I realized what was going on, I stopped and said, "Oh right.  We were supposed to do that twice.  We'd better got back and do it again."  That girl was apparently amused.  The point the youth was making was that God can use us even when we mess up.  Robin says, "God wastes nothing."  Janice has a whole sermon about this.  I have a picture of the fallout from when I messed up...and God made use of it.

Fortunately we've not had anyone fall out since that very first concert.  Partly that's because we've decided to make them have water bottles with them just in case.  The water bottles sing soprano. 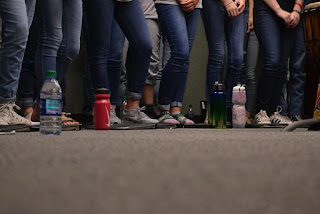 We also ran into Nan Brinson and family.  This has been an annual occurence...her finding us somewhere on tour.  It's always nice to see her.  She's like our biggest fan.  Unfortunately I didn't get a picture of the Brinson Brothers with her.

One of the staff asked me if a small group of us could go sing outside the room of a patient who couldn't come to the concert because of her compromised immune system.  She is five and has Down Syndrome.  I took 6 of the youth and a couple of chaperones.  (By the way, it was very hard to pick a few folks, because I wanted to pick everyone).

We just sang a couple of songs, but she was so into it.  She danced and clapped and grinned from one ear to the other.  We weren't allowed to take or post pictures out of privacy concerns, but if you follow her mom I think you can find video of the whole thing.  It was precious.

There were 45 of us singing at this concert...and 3 kids with parents in the audience (and of course then the second "concert" with only 2 in the audience).  It's the smallest crowd we've ever had.  Caroline, now a chaperone, said to me, "Remember that time we sang for six people in Memphis?  You told us that you used to think a successful concert was when there were more people in the audience than there were performing, but you decided you were wrong and it was actually a successful concert if one heart was moved."  Still true.

When we got on the bus, we...had to sit for a minute before we left for lunch.  We had, uh, too much time.  We actually sat on the bus eating cookies to pass the time.

Our second venue was an assisted living facility.  I sent posters to all our venues ahead of time, and I was tickled that they had posted one by their mailboxes! 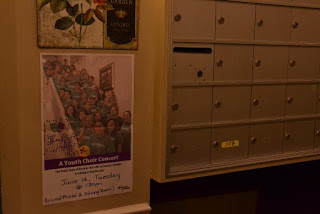 We did more songs from memory.  It was kindof a small space, but bigger than it looks in this picture.  It was good we got there early, because they decided to change our concert time so we could sing right after lunch.  No problem!  We're...always...early.  ?

The visiting was especially choice at this one.  Check out these pictures.

From Rosewood we went to Avery Island, LA, which is a particular salt dome...the home of Tobasco sauce.  We toured the factory.  It was hot outside, but so cool!  And I'm not just talking about that guy in the glasses... 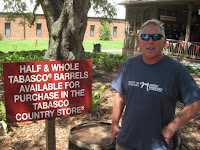 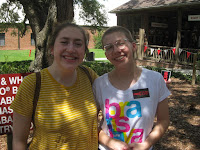 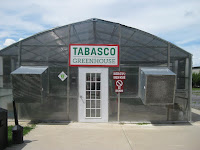 Did you know that Baton Rouge refers to a red stick used to measure the ripeness of peppers when they are picked?  You do now. 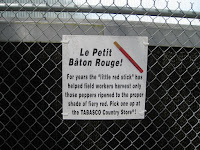 That's a lot of Tobasco Sauce. 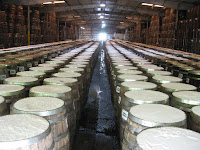 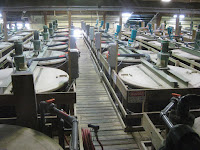 They were producing while we were there! 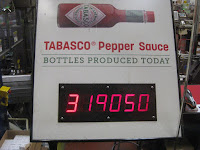 Just a boy and has oversized bottle of Tobasco. 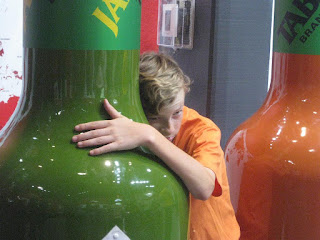 Several of the youth tried the "Scorpion" sauce.  Bless their hearts, they don't know how peppers work.  They ate a dip of the sauce and thought, "Huh that's not so bad."  So they ate a few more.  Then it got real.  They were scrambling for water...not realizing that water was going to help them.  I'm definitely a bad person for kindof enjoying the whole thing.  I suspect they won't be doing that again.

After Avery Island we headed on towards New Orleans.  We approached metropolitan Boutee, LA, and I started looking for a very important landmark.  I found it.  The bus needed fuel anyway, and as has been the case most of the trip we had some time.  So we stopped to fuel and take a moment at the very important landmark, which is actually a carwash I helped build when I was building carwashes during the summers in college.

I said, "You guys, I helped build this carwash!  This pit in the floor?  I dug that hole!  I fully understand that this is the most ridiculous thing I've ever done with the youth choir, but I just felt like you should see it."

The youth are really good sports about all this.  They've been very patient with me while I've been dragging them to all these places that mean something only to me.  Fortunately for them the Tour de John is officially over, as I don't have anything of note (or of note to me) in New Orleans or Montgomery. 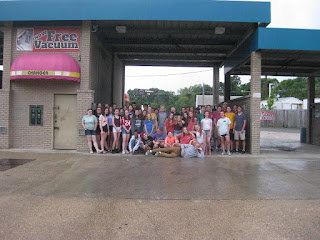 We checked in to our hotel in NOLA on the early side of things.  That left plenty of time for devotional, and we used it.  I had gotten away from doing this each night in favor of devotionals at memorials and such.  I'm really enjoying doing them this way again.  Connecting each night and thinking back over what parts of our day were moving.  Hearing others talk about the way they are experiencing things deepens everyone's experiences as we share wisdom and laughs.

And this year as we learn about being thankful.

And also learning how to write good thank you notes. 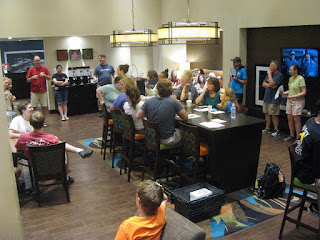 And with that, Tuesday came to an end...at a completely resonable hour and on time.
Posted by John at 9:41 AM