Wrapping Up the Youth Music Mission: Thoughts on Friday

I have mentioned in a previous post that Zak and Owen have always been downstairs in the morning.  Xander has also been a part of that crew.  In fact, he tells me he's usually been down there before them.  Because Tait very graciously untaped the doors each morning, I was never down there first!  I like how Owen photobombed this one...this was not staged. 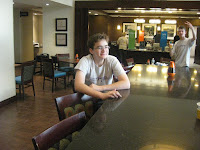 We went to our final concert of the tour.  We were there in plenty of time, continuing our streak! 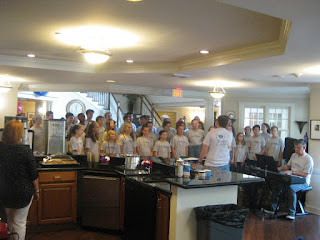 And of course the visiting... 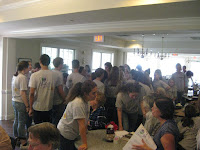 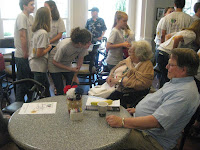 Including a visit with Amanda, Vince, Lily, and Vince's parents!  They came to New Orleans just to see us (well, and to spend a weekend, but I choose to believe they came to see us).  You'll note their excellent taste in shirt.  They have been chaperones on tour for a number of years, but had to sit this one out because of that little bundle of joy.  Next year I'll make her a tour onesie and she can come along! 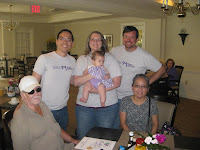 After visiting, the place gave us punch and cookies, which were super yummy.  Then we took a group picture.  I like the layout, but I didn't get one I really liked.  I'm hoping Kelsey got a good one.  By the way, she's responsible for about half the pictures on this blog. 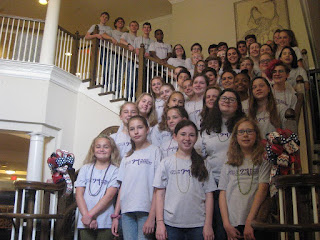 Unfortunately, the punch and cookies, visiting with Vince, Amanda, and Lily, changing, and photo session all combined to make us leave this venue later than we planned.  As a result, we were, for the first time on the tour, running behind.  We opted out of our planned stop in Montgomery and final devotional stop...and still wound up arriving about an hour later than planned...11pm.

We came back with everyone we left with, and with that my 11th tour was in the books.  Between the concerts on tour and the prior local concerts, we sang 10 concerts for several different kinds of audiences including children, seniors, and people with disabilities.  We drove more than 1500 miles.  61 people.  1 choir.  And a whole lot of love.