I didn't do an arrival post last night, as the parents already knew since they picked us up!  Once I was finished at church, I decided to have some dinner with the family and come home (though I did see one of the youth at Melton's!).

Our day started in the hotel like the other days.  A little later start, though, because our concert wasn't until 11am.  We also had a slight change in personnel.  Two folks headed to the airport early in the morning, and overnight we were joined by Theresa, alumna extraordinaire!  She caught a bus to Charlotte to hang out with us...and we brought her back the with us!

I was amused by this sign on my floor.  Note the description of the alarm... 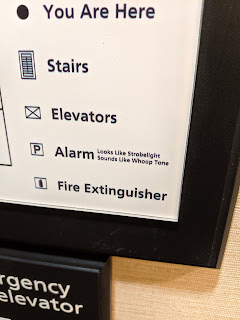 And...the waffle.  Now this place was interesting.  It had one kind of batter, but 2 different offerings for the waffles.  You could get a whole waffle or the 4 mini waffles.  As if there's any question there.  Come on, man.  This waffle maker also had a timer, so you could see exactly how long it was to glory.  45 of the longest seconds of my life!!! 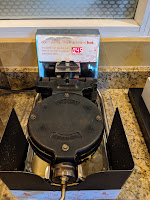 Our final concert of the tour was at the Levine Children's Hospital in Charlotte.  We've sung their before.  A handful of the current singers were there last time we sang.  It's a great venue.  People pass by on their way in and out, and through the Ryan Seacrest studio they broadcast the performance to the entire hospital.

It was another solid concert for us.

I should be a little more specific, perhaps.  This year, in addition to being memorized for the first concert, the choir has been very responsive.  They pay attention to me, and we are able to make adjustments on the fly.  It has, for the most part, tuned fairly well.  The energy level has been pretty good too, even when the audiences were small or less responsive than we might hope.

And worth noting, at the beginning of the week we really had a hard time keeping our hands at our sides, but by the end we had made good progress on keeping them there.  I'm looking forward to tomorrow, when we'll sing this music for the last time in church. 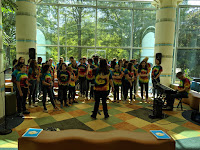 After the concert we dropped by the Concord Mills mall for lunch.  Small world!  We encountered the youth choir from the Shallowford Presbyterian church there.  I had a delightful conversation with the director in the food court.  They weren't returning home until today.  And they left the Thursday before we did.  Sometimes I think a longer tour would be fun, but our church schedule really doesn't allow it to run any longer.  And even if it did...I'd rather come home wishing the tour were a little longer than wishing it had ended a couple of days earlier.

We stopped on our way home for some ice cream, courtesy of the Chancel Choir.  It was nice of them to take up a collection to cover the costs...and a few of the youth wrote thank you notes.  [Editor's Note: It's working!!!] 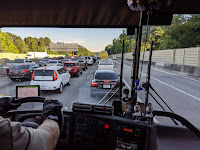 We weren't quite finished when we pulled up to the church.  Years ago I would give the driver a tour tshirt at the end along with his/her tip and thank you note.  With Mark, starting in his second year, I gave him his shirt at the beginning so he could match us.  He is the first driver who ever wore it.  This year he wore four different tour shirts, I think.  At least 3 I can remember.  He really is one of us, and the youth feel it.

On the way in, we were supposed to stop in South Carolina.  We bypassed the stop in the interest of time, but Mark told us it was 4 years ago at that very stop that we gave him his first shirt and, in his words, accepted him into our group.  He's a great guy.  Easy to work with.  And he cares about my kids.

After unloading and picking up the bus, everyone went on their way.

A parting thought for the youth.  I suggested they remember how they have grown together in this week.  Remember how important senior night was for them, or the fire station, or the concerts, or Dollywood, or, or, or...  We don't rehearse for the summer, and it's easy to forget.  But come the first Sunday of August, we'll once again be that place where everybody knows your name...and they're always glad you came.