Well...this hotel is awesome, and that's exciting.  Like next-level shower.  Except the pool, which is somehow under construction.  But we don't use the pool.  Also no sticky notes to tell me the linens were cleaned just for me, but as I've mentioned before all that did was make me think they hadn't been...so that's probably a good call.  And the breakfast was on point.  I'll of course post a picture of my waffle tomorrow.  All that said, we have an earlier morning this morning (concert at 9), and my wifi hotspot was acting up, so I don't have enough time to do this properly.  It will be delayed a bit.  Here's hoping it's worth the wait.

Wanted to start my post with a picture of the very first choir tour.  You can see this hanging in the lobby of the church.  Of course it was a men's glee club back then.  It was before my time, so they didn't wear cool tshirts.  If you look carefully you can see Curt in there.  This is back when he toured as a singer.  [Editor's note: Curt, you were right...you were the first chaperone mentioned in the blog.  Congratulations.] 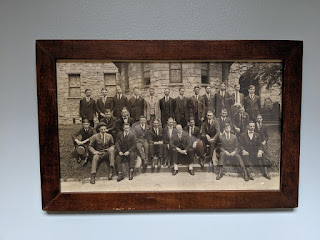 That's completely false.  Except the part about Curt bring in the blog first.

We did something different this year (which is a theme you'll probably hear a lot of, because I'm doing a lot of new things on tour this year).  On Saturday, we had a 4-hour gathering at the church.  We rehearsed for a couple of hours, had dinner together, and then sang a concert for the chaperones.  All-told, we ran the program about 3 times.  That combined with stronger attendance throughout the Spring (more on that later) meant that for the first time in my music mission history, we memorized our music before we left, and we didn't bring our folders on the trip!!!  I'm super proud of this and especially pleased for our audiences.  We sing waaaaay better when we aren't holding folders.

After the long rehearsal on Saturday, we gathered at the church early Sunday morning.  The bus was there waiting for us when I drove up at 6:45 (you may recall last year that was, uh, not the case).  We loaded on time and started our commissioning service on time.  Dalton was on hand to offer a message and celebrate communion with us. 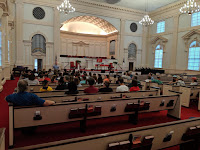 It was Pentecost Sunday, and while we missed the regular morning worship services (BLUEGRASS, Y'ALL!!!), I felt like the Spirit was stirring.  I remembered the tongues of fire inspiring (breathing into) us, equipping us for ministry like the Disciples 2000 years ago.  The moments before we get on the bus are chaotic, checking forms and medications and lists...making sure we have everything we need and we have all the people.  I'll admit that often, even with the commissioning service, I don't feel particularly connected with the mission right out of the gate.  But this year, for whatever reason, I felt more than usual that the work we are doing is more than important...that the work we are doing this week is the work of the Spirit.

Those of you who have followed us before will remember that Jesus rides shotgun in the bus and in our chase van, Chaperone 1.  I brought one on and saw that Mark (our long-time driver) already had one riding.  It's true what the say.  The only thing better than one DashBoard Jesus...is tow DashBoard Jesi.  Here's a pretty good picture, with Mark's hat in the background. 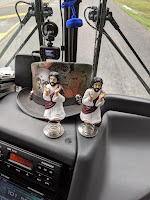 ...but the still picture doesn't really do this Jesus Jive justice.  Let me see if I can give you an action shot of the real awesome.


It's hypnotic, isn't it?  Now imagine that for hours and hours.  Sometimes they dance more, and sometimes they dance less.  Either way, DashBoard Jesus (DBJ) is there for us.  The youth are always happy when the tour starts.  Poor souls.  I really like this picture of Jonah.  This is his first tour with us, but he finished 10th grade this year.  He's a great addition to our little band... 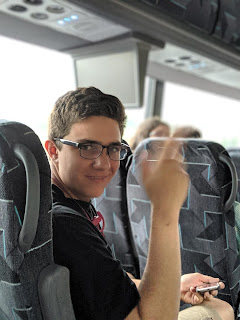 We made a quick stop along the way at the New Echota historic site.  It was closed, so we...walked around the gate.  If the authorities are reading this, it was entirely my idea and my fault.  To be fair, we only walked on the parking lot, and we were only there for 8 minutes. 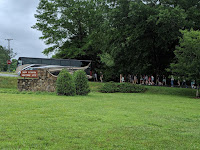 New Echota was the capitol of the Cherokee nation in the late 18th century.  It is also the starting point of the Trail of Tears.  So often when things become difficult for us, we feel like our journey is a harder row to hoe than anyone else's.  We focus on those who we feel have an easier walk than we do.  But there are a couple of problems with that.  First, everyone has a cross to bear, even if we don't know what it is.  Second, all of us standing in that parking lot are privileged people.  As lives go, our way is easy compared to some--maybe even compared to most.  Certainly compared to those who set out from this place on the Trail, most of whom would never make it to their destination.  In any event, each of us endures storms.  But the nature of living is that storms come and storms go.  There is suffering and there is rejoicing.  Our concert recognizes this truth and celebrates God's presence in time of storm and the strength God gives to weather it.

After New Echota we kept heading toward Louisville.  Our path took us through Nashville, where we didn't stop.  But I thought I'd put a picture here for you anyway... 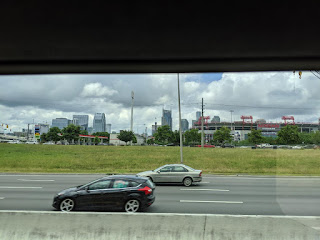 Lunch.  There were several choices.  A bunch of folks went and ate at Po Thai, which they said was delightful.  But I knew right where I was headed.  And a shout out to Amanda James, who taught me the glory that is mixing Horsey Sauce with Arby's Sauce.  She and Vince have not toured with us for a couple of years in order to be fantastic parents to Lily, but they're with us in spirit, especially when I eat at Arby's. 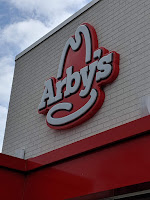 Also worth noting: Arby's is hiring.  Just in case this church music gig doesn't work out. 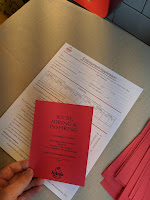 The youth find ways to busy themselves on the bus.  Most of them involve small screened 2-way communication devices.  So I love it when I see someone doing something else.  We have a few artists onboard.  We've got one taking a summer math class (who, as I type, is I think taking a test, so SHHH!).  Brooke is working on a cross-stitch map of the United States.  If she keeps working on it I'll post an after pic later. 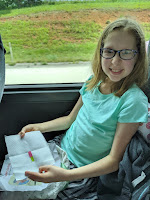 It's a reminder that the youth are all spectacularly and variously talented.  I wonder, if I were to thoroughly inventory the kids on this bus, just what we would be capable of.  I'm pretty sure the answer is...anything.

And then we got to our first concert.  It started raining as we were headed in, which made changing into our concert clothes a little tricky, though we managed.  We sang at the Forum at Brookside.

And then we visited.  This was maybe the best first concert we've ever sung.  It was really solid.  But even still, the sharing time after is really the magic.  I love watching the youth visit with folks  I love it when the audience tells me the enjoyed the concert...and even more when they tell me how much they enjoyed visiting with the singers.

When I said "Music Mission Gets Rolling," you probably thought I was talking about the wheels on the bus?  I guess I was, but also...bowling.  I've never taken a group bowling on tour.  It was fun.  The lanes were a little old school (but they had automatic scoring at least...when I started bowling you had to count them yourself).  The youth were grouped by their rooms, and the bowled with their chaperones.  Carole would like for you to know she bowled 3 strikes. 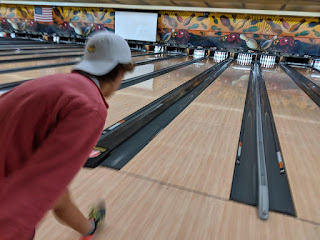 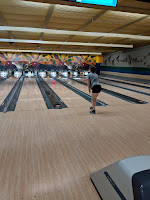 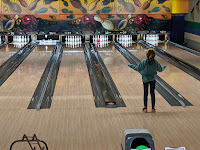 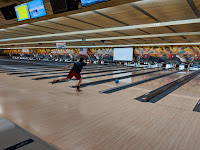 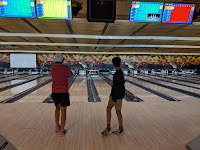 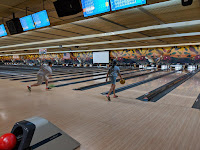 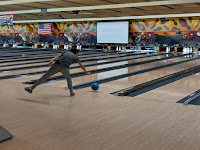 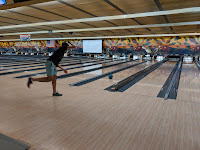 Kinda like the concerts, though, the main thing isn't what it may seem.  It's not really about the bowling.  It's about the friends.  The time together. 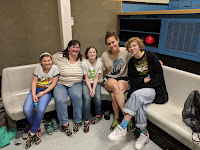 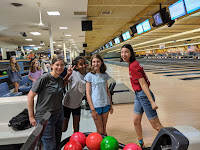 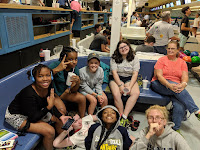 Curt is not the favorite chaperone.  It's coincidence that he's in the blog a few times today.  But listen.  If you bring your own ball shoes and shirt to the bowling alley, you get your picture in.  He beat my by 1 pin in the first game and a lot more than that in the 2nd.  He's actually a good bowler. 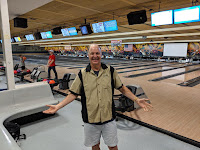 So it wasn't about the score.  It also wasn't about the food.  They had told me they had a snack bar with plenty of food for dinner, and I guess that's technically true.  But we were there for 2 hours...and the last two people got their food on their way out the door.  It seems Virginia was not pleased with this arrangement (though the fries really weren't bad, actually.  I know because I stole one.). 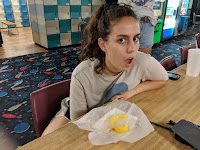 And, as it turns out, there is another option if church music goes wrong... 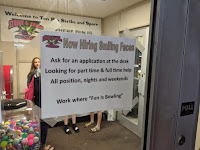 For the record, I didn't stage this shot.  I just pointed my camera and hit "video."  Not bad.


After bowling/dinner(ish), we headed to the hotel.  As I said at the top, it was great.  I didn't know this about Hampton Inn, but they are required to remodel every 10 years at least, and this one had just been remodeled.

We checked in and then had our devotional time.

During devotional, I start by recapping the day a bit, making any housekeeping announcements, and going through what we have ahead of us the next day.

After that we sang a hymn.  All Praise to Thee, My God, This Night.  It's one of my favorites, but we can't really sing it in church because we don't often church at night.  Really good for devo though.

I tried something else new for devotional.  Instead of inviting people to share their stories, I invited them to write about a time during the day they felt moved or close to God or happy.  I read them out.  This meant that everyone participated, and because they were shielded by anonymity, they shared a little more personally than they might otherwise have shared.

Most of the youth talked about the joy of seeing the joy of others, either in concert, after the concert, or in time together.  The joy of others.  It's sometimes easy to believe that youth are self-absorbed, but what they wrote last night tells a different story.  They are attuned to what is going on around them, and the self-absorption is more of a defense mechanism than anything else.  And they are selfless...when we give them opportunities to be.

And then, to bed.

We sang our concert in Louisville this morning, and we are now headed toward Cincinnati.  I'll post an arrival message tonight and details of our day in the morning.  Thanks for following along!