Our day began, as usual, with a DIY waffle.  Still the minis, which isn't the best, and also no cinnamon roll batter, so...  But a waffle's a waffle.

We headed out to our concert venue, which was a community center in south Knoxville.  I send each venue posters with our picture and concert information and a space for them to fill in the details.  I've only seen one other one on this trip...but this one was prominently displayed on the front door! 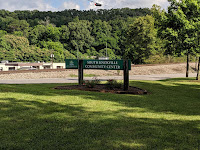 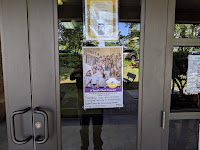 The audience was a mixture of seniors from the community and boys/girls club kids from downstairs (she said the brought up the "better behaved" ones).  They were perfect angels, and engaged the whole concert.  It was a good audience, both in terms of number and in terms of connection to the tunes. 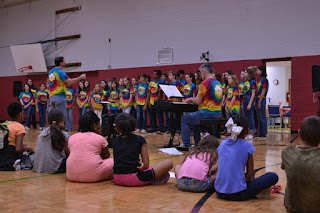 After the concert the director of the center took the mic from me and talked about her memories of touring when she was younger and a chaperone and how important it was to her and to all the people they met.  She said it is for us to sow the seeds and for God to nourish them.

And...back to visiting after!  Whew.  We were actually spread fairly thin for visiting, which was a delightful problem to have. 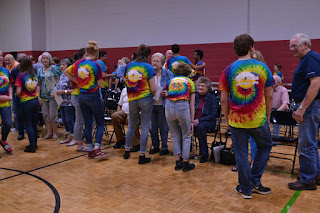 And...the folks at the senior center provided lunch for us!  They were so kind.  It's especially helpful because we're getting near the end of the week, which means wallets are starting to get a little thin for some of the kids who spent too much time in Claire's back when we were at the mall. 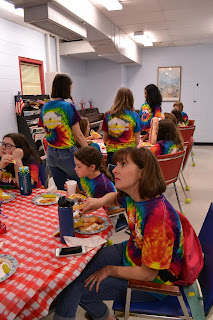 Across the street from the senior center: our next hotel. It gets a little drafty. 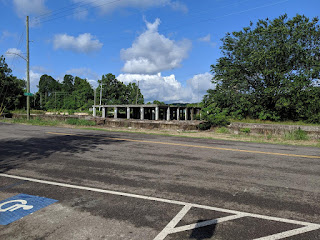 After lunch we headed for Charlotte.  I had asked Virginia to find me a scenic overlook along the way, and boy did she deliver!  We went to a place called Jump Off rock.  It's a bit over 3000 feet in elevation and overlooks a gorgeous valley.  There is a legend that a Cherokee woman jumped off the rock when she learned her lover had been killed in battle.

I'm glad my camera has a panoramic function...

Here's the crew, with Mark again occupying the center.  While were there, I had a brief devotional moment, which really was just to say...when I saw we were going to cross the mountains, I wanted to make sure we stopped on one to take in the view and enjoy it.  Which is really the same thing we've been doing every night when we write about our day...taking a moment to savor the day we've had.  Intentionally slowing down for a moment to see the beauty around us all the time. 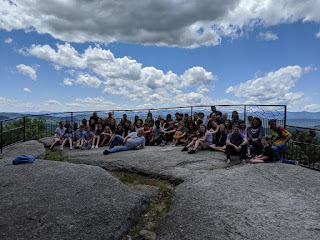 We had just a bit of walk around time, and I got some pictures... 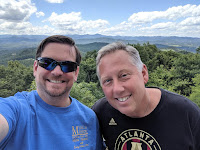 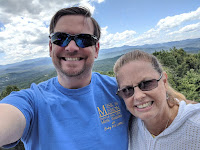 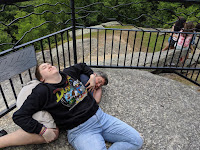 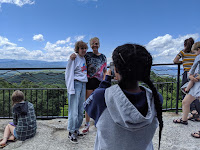 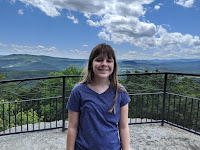 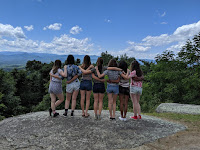 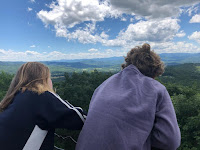 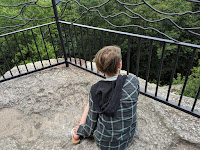 I haven't mentioned yet the lack of sticky notes in the hotel rooms that say our room was cleaned just for us.  It's been disturbing.  Not really.  But here in Charlotte they took it to a whole new level.  I know my room was clean because this towel animal told me it was!  Are we on a cruise?! 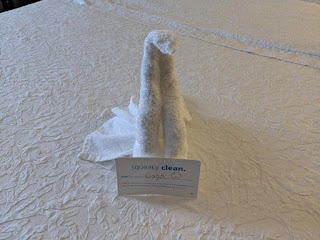 After a little time to change, it was on to Senior Dinner.  Mary found this place called Mario's that had a room in the back we could use.  They set it up and catered it, and it was AMAZING.  Probably the best senior dinner I've had on one of these. 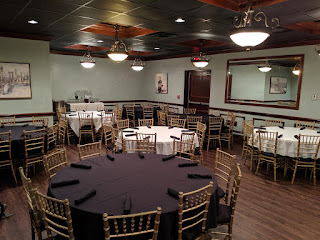 And new this year, it was a recognition dinner, not just a senior dinner.  We gave out awards for rookie of the year (for someone who was on tour for the first time and has an exceptional grasp on who we are and what we are trying to do: Kayley and Daniel).  I gave out Director's Awards (for the same thing, only for the rest of the choir except the seniors: Kathryn, Brooke, and Addison).  I gave out attendance awards for missing only one rehearsal all year long (Sophia B, Erin, Nisal, Katie, Sophia D, Olivia, Leigh).  That award carried with it an Amazon gift card.  I gave one perfect attendance award.  Sarah has missed nothing at all, not one event, since January.  She received an Amazon gift card as well.

And of course it was senior night.  I had picked up stuffed lemurs at the zoo and a tshirt for them to wear.  I also bought pins at Dollywood to put on their shirts.  And of course I wrote them a letter.  I'm sure going to miss these guys.  I always wonder what I'm going to do without the leadership of my seniors.  Every year it makes me nervous.  They are so important to who we are. 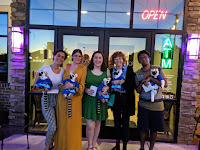 We had a significant quantity of leftovers, and the server asked me what I might want to do with them.  I asked if there was a local place that feeds the hungry we could take it to, and she said all of them were closed, but there was a fire station not far away.  So (for the first time) we went to the fire station and knocked on the door.  It was a 4-person company (which only ties for our smallest audience on this trip!).  We sang them a couple of songs unaccompanied and gave them all the food, which they were excited about.  Turns out Unclouded Day is the captain's favorite song! 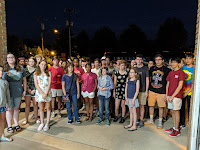 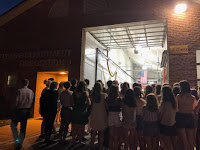 They invited us in to have our picture made with their engine (and them of course!).  They were super nice.  We thanked them for letting us sing for them and swapped contact information (the captain said they would like to put us in some of their public relations material if that's ok). 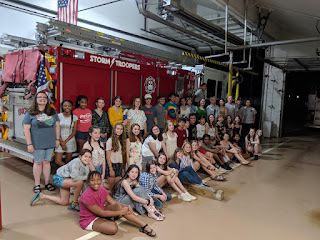 Their insignia (not sure what they actually call it...) is waaaay cool, so I asked if I could take a picture of it, and he said sure, but he could do better.  He gave me a patch!  I'll be hanging that prominently in the choir room when we return.  The youth really enjoyed this stop, and so did I. 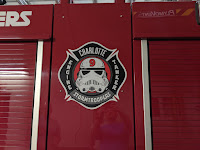 Back to the hotel fairly late, but we had notes to finish and postcards to write.  We finished up about 11:30 and headed up to bed.  We could sleep in a bit this morning because our concert isn't until 11...thus far as I'm in the breakfast area now everybody is looking fresh, radiant, and sincere!

Overnight we picked up a singer when Theresa arrived on a bus from Atlanta.  This morning we lost two when one chaperone and one youth flew out of the Charlotte airport.  We're headed to sing at the children's hospital in a few minutes...and then to lunch and home sweet home!
Posted by John at 9:36 AM